Our main result, which is independent of the market considered, is that standard trading strategies and their algorithms, based on the past history of the time series, although have occasionally the chance to be successful inside small temporal windows, on a large temporal scale perform on average not better than the purely random strategy, which, on the other hand, is also much less volatile.

Expertise
The blog Monevator makes a great point about expertise in stock-pickers:

The worst are probably engineers. If I was charged with recruiting for a hedge fund by degree alone, I'd pick maths and physics grads first, then high-flying arts students -- as in history, philosophy, and so on.

This is no disrespect to engineers, who play one of the least appreciated roles in modern society – heck, they pretty much gave us modern society.

But boy do they get themselves in a muddle with investing.

I suspect it's an innate distaste for uncertainty and fuzziness that's helpful for engineering but lethal to active investing.

If you're a structural engineer, you build a bridge that will take several times the maximum load you can imagine passing over it, just to make sure.

Apply that mind-set to active investing and you'll either cower in cash, or else you'll become wedded to certainties: "I just KNOW this stock is good enough!"

Full throttle
The auto industry is back, writes The Wall Street Journal:

After years of layoffs, plant closures and corporate bankruptcies, U.S. auto makers and parts suppliers are pushing factories to the limits. At General Motors (NYSE:GM), Ford (NYSE:F), and Chrysler, more flexible union agreements now allow the companies to build cars for 120 hours a week or more while paying less in overtime pay.

Nearly 40% of car factories in North America now operate on work schedules that push production well past 80 hours a week, compared with 11% in 2008.

Breaking up
Stocks are finally being judged individually, rather than as a group, writes WSJ:

Shares are moving less in tandem with the overall market than at any time since the financial crisis, by some measures. That suggests that investors are zeroing in on the prospects for individual companies rather than making wide bets on stocks as a whole ... One big sign of this change can be seen in correlation, a measure of how closely different stocks tend to move together. This measure has fallen to post-financial-crisis lows. As of the end of July, stocks in the Russell 1000 index of large-capitalization stocks had a weighted average correlation of 0.30 to the index itself, the lowest for and end-of-month since 2007 and down from 0.57 a year earlier, according to Deutsche Bank data.

Unknowns
Barry Ritholtz writes about unknowns in the market:

We do not know if equities are either over or under valued, because we have no idea what future earnings are going to be. The debate about valuations often turns on which group's forecast is going to be correct: Expansion or contraction. (We shall ignore the extremeists on both ends of the scale, as they are annoying little twerps who are almost never correct).

Consider how earnings might change in the near future: If the economy were to accelerate (Sequester ends? China improves? Europe recovers?) than earnings could increase significantly, thereby making stocks "suddenly" look cheap. The opposite of this is a US recession, where earnings fall 20-30%, making stocks appear pricey and due for a more significant correction than the 10-19% blips we have plowed through the past 5 years.

Checking in
Hotel occupancy is back to pre-recession levels, writes Calculated Risk: 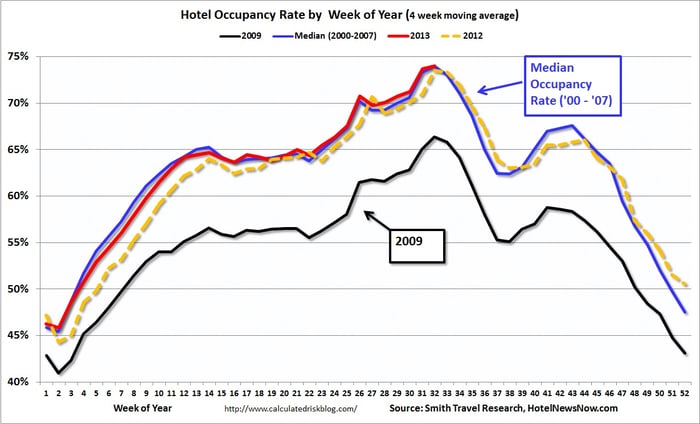 How to be happier with your money
Carl Richards quotes Paul Graham discussing money and happiness:

"Most people would say, I'd take that problem. Give me a million dollars and I'll figure out what to do. But it's harder than it looks. Constraints give your life shape. Remove them and most people have no idea what to do: look at what happens to those who win lotteries or inherit money. Much as everyone thinks they want financial security, the happiest people are not those who have it, but those who like what they do. So a plan that promises freedom at the expense of knowing what to do with it may not be as good as it seems."

How to be even happier with your money
This video from Harvard Business School discusses the relationship between money and happiness: