Mexico has a problem. Its oil exports are falling, and the government needs to boost production. In the current, postmodern age, governments like Mexico, Brazil, and others prefer to maintain mineral ownership and either contract out the drilling work or establish a nationalized oil company. By investing in quality oil and gas service firms you can grow your portfolio, even if the majority of reserves are held by national oil companies.

Mexico has recently pushed to open up its energy sector with profit sharing agreements. Seadrill stands to benefit, as it already has experience working with the Mexican state oil company, Pemex. The driller has already proven to Pemex that it is more than able to drill in challenging deepwater fields, allowing Pemex to choose Seadrill in the future without hesitation. Seadrill's ships have drilled some of Pemex's deepest wells, and Pemex has already agreed to use its West Pegasus semi-submersible vessel until 2016.

Drilling in the Gulf of Mexico is very challenging. Many storms pass through the region ever year, threatening rigs and their crews' lives. Seadrill has a number of semi-submersibles and drillships under construction that can drill up to 40 thousand feet. These new ships are safer for their crews and the wells, allowing Seadrill to charge higher day rates.

While Halliburton (NYSE:HAL) has a large amount of experience working in conventional and unconventional plays in the U.S., it is also well acquainted with national oil companies. In the Middle East, Saudi Aramco recently contracted Halliburton to drill wells and develop the Qatif field.

Mexico is no different, and Halliburton will be working in the Chicontepec field near the Gulf coast. Due to challenging geology, Pemex has asked Halliburton to provide a variety of services from the geophysics to production operations.

Mexico has significant fracking possibilities, and Halliburton is ready to meet the nation's needs. To ease Pemex's environmental fears, Halliburton has already demonstrated its Zipper Frac technique in the nation and decreased water use by 50% compared to conventional fracking. Mexico is estimated to have 2.5 to 7 times more shale gas reserves than conventional gas. Right now Mexico is paying for expensive LNG imports in cities like Manzanillo, and the nation would be greatly benefited if Pemex can develop its domestic shale opportunities with Halliburton.

Schlumberger (NYSE:SLB) is a larger oil and gas services company and is active in many similar markets to Halliburton. In Mexico, Schlumberger is using its LIVE digital slickline technology in offshore fields to increase production without needing to bring a significant amount of new equipment online. In Southern Mexico, the company was able to save Pemex 96 drilling hours by using its turbodrilling application, instead of a conventional drilling system.

With growing demand for oil and more unconventional fields being brought online every day, Halliburton and Schlumberger are looking to grow in the years ahead. From Mexico to Saudi Arabia governments are fighting declining production, and they need the advanced services that only experienced multinationals can provide.

Where Is The Best Place For Your Capital?

Return on investments and profit margins show that Schlumberger uses its capital more effectively, leaving more cash for capital investments, share buybacks or its dividend. Low U.S. natural gas prices have put damper on domestic drilling and Halliburton's operations, while a more competitive international hydrocarbon market has helped Schlumberger. Halliburton's return on investment of 9.5% and a profit margin of 6.6% are a step below Schlumberger's profit margin of 13.8% and ROI of 13.4%. Looking at the default risk held in these firms' balance sheets, Schulmberger and Halliburton are practically the same with total debt-to-equity ratios around 0.32.

It is important to note that Seadrill's total debt to equity ratio of 1.78 and long-term debt-to-equity ratio of 1.34 are significantly higher than those of competitors like Transocean. You should be aware that, in the case of a future downturn, Seadrill's high debt load could force the company to cut its industry leading dividend. 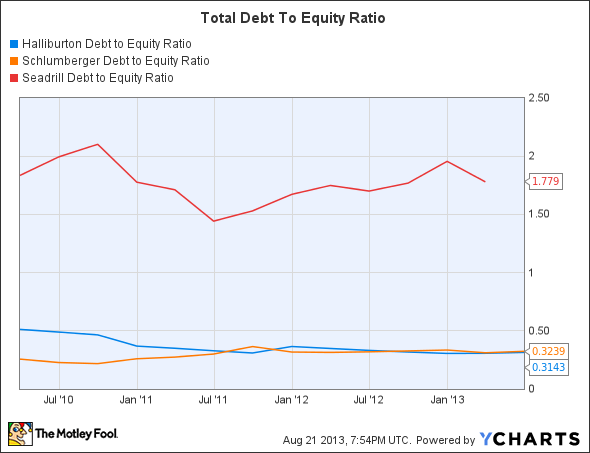 National oil companies are here to stay, and oil and gas service firms are a great backdoor to invest in closed off nations. Seadrill's history with Pemex is encouraging, but the company's large debt load gives Seadrill a large amount of risk. While Halliburton and Schlumberger both make significant portions of their income selling to national oil companies, Schlumberger's greater international focus makes it a better growth opportunity for the coming years.