In the latest in a series of weak economic indicators, orders for U.S. durable goods fell by 7.3% in July -- the largest drop in close to a year and a jarring reversal from three consecutive months of gains. Economists polled by Reuters were expecting a 4% decline.

This is the sort of data that raises the odds that the Fed will delay the winding down of its monthly bond purchases, a.k.a. quantitative easing, which is widely -- too widely, in my opinion -- expected to begin in September.

Merger Monday: Amgen buys Onyx Pharmaceuticals
On Sunday, Amgen (NASDAQ:AMGN) announced that it will pay $125 per share to acquire Onyx Pharamaceuticals (NASDAQ: ONXX) in an all-cash deal valued at $9.7 billion, net of Onyx's cash. The acquisition price represents only a 6.9% premium to Friday's closing value, but it's a more fetching 44% premium relative to June 28 -- the day before the market became aware that the two firms were in takeover discussions. Furthermore, following a long period of underperformance, Onyx's shares have quadrupled over the past five years: 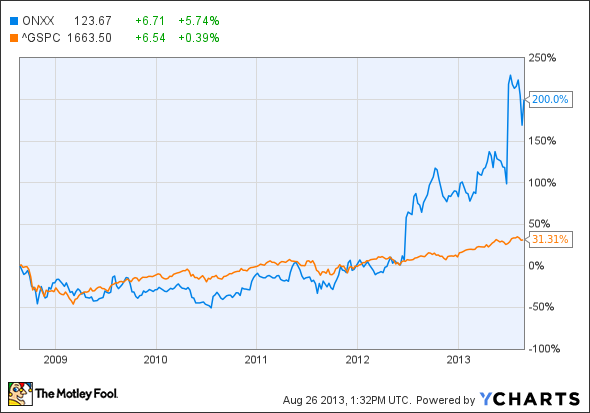 What is Amgen getting for its money? Primarily, Kyprolis, a blood cancer treatment that was approved in the U.S. last year. Kyprolis has already notched up $125 million in sales in the first half of this year and is expected to achieve "blockbuster" status (more than $1 billion in annual sales) by 2015.

Kyprolis looks like a nice fit with Amgen's existing drug portfolio: 40% of the company's revenue is attributable to cancer-related therapies. In an interview, Amgen CEO Robert Bradway said Amgen had performed extensive due diligence on Onyx and was "very disciplined" with regard to price in order to achieve a return on the acquisition. That ought to be music to Amgen shareholders' ears, as executives are often prone to buying growth for its own sake, rather than profitable growth. Furthermore, discipline ought to be the watchword in this type of acquisition; Kyprolis's growth trajectory is contingent on further testing in order to obtain approvals for wider release.