One industry in China that appears to be immune from macro concerns is its booming online gaming industry. Even though game consoles, such as the Wii, PlayStation 3 and Xbox 360, are still partially banned on the mainland, PC games are permitted.

Therefore, all that pent up demand for video games has been channeled into PC games, and some of these companies, such as NetEase (NASDAQ:NTES) and Changyou (NASDAQ:CYOU), have experienced massive growth over the past five years as a result. Other companies, such as Shanda Games (NASDAQ: GAME) and Giant Interactive (NYSE:GA), haven't been as fortunate. 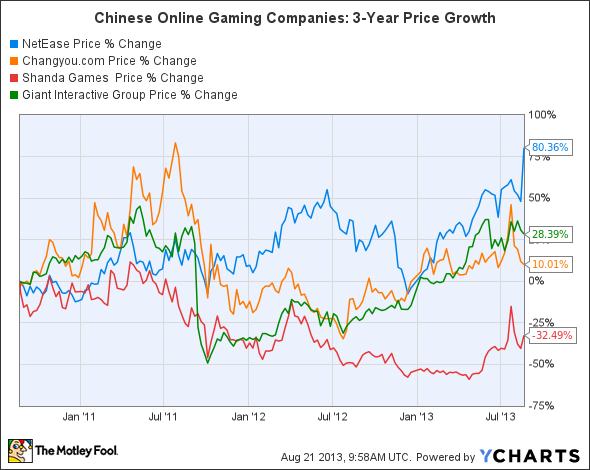 What separates the winners from the losers in this hotly contested market, and is there still room for the market leaders to grow?

Shares of NetEase surged more than 10% on August 20, after the company reported steady top and bottom line growth for its second quarter. NetEase's 15.4% gain in earnings and 25.1% jump in revenue outperformed its rival, Changyou, which reported an 8.8% increase in earnings on 23.8% top line growth.

NetEase attributed its strong bottom line growth to its advertising and online games businesses, which respectively grew 33% and 18% from the prior year. Online gaming continues to be NetEase's most important business, accounting for 87.5% of total revenue. By comparison, Changyou's advertising revenue grew 11% as its online game revenue increased 24%. Although Changyou's gaming revenue grew at a faster pace than NetEase, which is a substantially larger company, its paltry advertising revenue growth caused shares to plunge 21% after it reported earnings at the end of July.

NetEase credited higher demand from automakers, Internet services, and consumer goods for boosting its advertising revenue. It attributed its healthy online gaming gains to increased revenues from its flagship games, which include Fantasy Westward Journey, Kung Fu Master, Ghost II and Westward Journey Online III. However, revenue from World of Warcraft, which NetEase licenses from Activision Blizzard, declined and offset some of those gains -- which shouldn't come as much of a surprise considering the massive loss of World of Warcraft subscribers Activision reported last quarter.

However, NetEase's margins rose across the board, with gross profit margin in the advertising and online businesses respectively rising to 56% to 81% -- a whopping increase from the margins of 33% and 73% it reported a year earlier.

Shanda Games fared far worse than NetEase and Changyou, plunging more than 20% over the past month. Last quarter, Shanda's earnings and revenue declined 27% and 22%, respectively. It then followed up those bleak earnings with an announcement that it was spending $812 million to acquire two of its affiliates, Shanghai Shengzhan Networking Technology and Tianjin Shengjing Trade Company, which currently handle Shanda's billing, prepaid card, and online support services. These services are used by customers of Shanda's massive multiplayer online games.

Prior to the acquisition, Shanda paid service fees, amounting to 21% of its revenue, to the two affiliates. Although Shanda believes that acquiring the two companies will improve its cost structure, margins and earnings, investors have expressed concerns that the massive purchase could sink the company, which only has $454 million in cash but $202 million in debt.

Giant Interactive, another maker of online and mobile games, fared better than Shanda, reporting a 20% jump in earnings and 11% increase in revenue last quarter. However, a 5% increase in active paid accounts to 2.3 million users was utterly anemic by industry standards. Shanda, by comparison, has 100 million active paid accounts. Giant's unsure third quarter forecast for "flat to moderately" higher sales growth also disappointed investors, causing a 9% drop after it reported earnings on August 7.

Now that we have met some of the major players in China's online gaming industry, let's take a look at a fundamental comparison between these four companies.

Although NetEase appears to be trading at a premium compared to its peers, that premium valuation is well deserved, considering its more robust top and bottom line growth. Investors interested in Changyou should keep an eye on its advertising revenue growth, which has been considerably lagging NetEase's. Even though NetEase is the largest company, it also has a low debt-to-equity ratio and strong profit margins.

Shanda shareholders need to watch the company's cash balance after its two big acquisitions, which might exacerbate rather than solve the company's lack of top and bottom line growth. Giant Interactive's sluggish paid user base growth threatens to keep in in the little leagues, as its 2.3 million active accounts are a tiny drop in the pond of 538 million Chinese Internet users.

The world of Chinese online gaming is a fascinating, high growth one, but it can be a tough one to navigate without a full understanding of which games are popular, the payment methods behind them, and the government regulation of the industry. You can learn more about how this lucrative industry operates in my previous article on Changyou. In addition, the gaming console ban could end sometime this year, which could shift the balance between the console and PC gaming industries significantly.

With the Internet penetration rate currently at 53% in China, compared to 81% in the United States, Internet-based gaming, advertising, search and e-commerce companies still have a lot of room to grow. With some due diligence, investors can separate the winners from the losers in this high growth sector, and uncover some excellent long-term, high-growth investments.