The health care sector can be daunting for some investors, and there are some good reasons why many people won't go near health care stocks. First, the health care laws have been changing constantly (how many times has Obamacare been changed?), and it is hard to say with any degree of certainty how the changing laws will affect these companies' bottom lines. Also, when a lot of people think of health care they think of biotech companies, which more often than not make up the entire list of "top 10 most volatile" on any given day.

Having said all of that, there are ways to get exposure to the lucrative health care sector while maintaining a low risk level. My favorite way to do this is by investing in the companies that make the equipment that the industry needs, such as Medtronic (NYSE:MDT). While there are several great options in the industry -- and we'll talk about some of the others a little later -- let's look at why I believe Medtronic is a great option for your portfolio.

What it does
Medtronic is a leader in several categories of medical equipment, including pacemakers, defibrillators, and orthopedic devices. In fact, Medtronic is the world's largest medical technology company, with a market capitalization of around $56 billion. The company produces an extremely wide variety of products for many areas of the medical fields, and sales are almost $17 billion annually.

Consistent growth
One of the main reasons I love Medtronic as a long-term investment can be summed up in one word: consistency. The company has grown its sales (and earnings) very steadily, as can be seen by looking at a chart of the past decade's revenues: 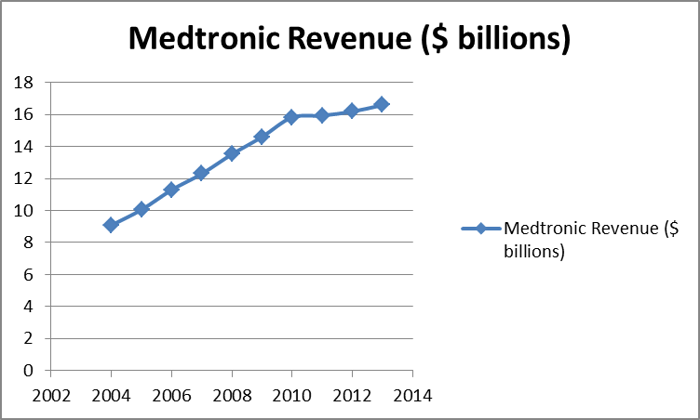 (Note: Growth has slowed down a bit since the recession, but since 2009 has resumed and continues to accelerate toward old growth rates.)

The company grows by a combination of growing the sales of its current products, as well as through strategic acquisitions, which add even more diversity to the company's product portfolio.

The future
The company plans to grow its market share and improve its operating efficiency over the next several years. In my opinion, the company's primary growth focus should be to grow its international business, which was the main reason the company beat estimates during its last quarter.

Medtronic has been actively expanding its business in emerging markets, particularly China and India. The company's total sales are currently rising around 4% annually, while sales to emerging nations are growing at a much faster 13% rate. However, emerging markets still only make up a small portion (12%) of Medtronic's total sales.  The company has stated that it plans to grow this to 20% over the next three years.

Financial strength
Aside from being one of the most consistently growing companies in the market, Medtronic is very financially strong. The company actually has a positive net cash position (cash minus debts) of about $1.3 billion and uses its cash flow very responsibly in terms of dividends and buybacks. The company pays a modest, but nice dividend of just over 2%, which represents a payout ratio of just 30%.  Back to our theme of consistency, the dividend has been raised every year and has more than quadrupled in the last decade.

Medtronic has also done a good (and consistent) job of creating value for its shareholders through buybacks. Since 2010, the number of outstanding shares has been reduced by about 3% every year, and I see this continuing for the foreseeable future.

A few competitors
There are several other choices in the sector, so let's take a quick look at a couple to see if Medtronic is really a better choice.

Becton, Dickinson (NYSE:BDX), another maker of a variety of medical supplies and equipment, is about 40% of the size of Medtronic. The company has done a better job of capitalizing on emerging markets, which make up 24% of its sales, but it lacks Medtronic's consistency and financial strength. When looking at such valuation parameters as dividends and buybacks, both companies are strikingly similar. The main reason I prefer Medtronic is that it trades at a cheaper valuation (trailing 12 months P/E of 16.0 compared with 17.5 for Becton) and is stronger financially (Becton has net debt of about $1.6 billion).

Baxter International (NYSE:BAX) is closer to Medtronic in terms of size, and there are some compelling reasons to consider investing in Baxter. The company produces medical equipment focused on blood and the circulatory system, and it is the leader in several of its target markets. Although the company is the most "expensive" of the three at 17.7 times trailing-12-months earnings, it does pay the best yield (2.76%) and has an excellent record of raising the payout, which is sure to appeal to income investors. Baxter also has an excellent record of consistent growth, and is very geographically diverse with just 43% of sales coming from the U.S. On the downside, the company carries a $2.3 billion net debt load, and has the highest payout ratio of the three, although it is not excessive by any definition.

Conclusion
In investing, steady and predictable growth wins over the long term. Although Medtronic's 7.6% average annual earnings growth isn't going to make you rich overnight, it is a very good return for what I view as one of the lower-risk long term investments there is. All three of the companies mentioned are worthy of consideration, but Medtronic wins in my book on a valuation basis, as well as for its excellent record of creating value for its shareholders.