Despite a recent string of bad economic news , vehicle sales remain strong, defying the overall downward trend. That has some investors asking whether we're seeing a small bubble develop in auto sales, and if that could stall what has so far been a great 2013 for General Motors (NYSE:GM), Ford (NYSE:F) and other automakers. Here's why I'm not worried.

The housing bubble due to speculation -- people buying excessive amounts of properties, or significantly overspending on a property. For automotive vehicles, the former reason isn't an issue, because the vast majority of people don't want to invest in multiple depreciating assets – unlike the false belief in 2006 that it was OK to own multiple houses, because prices would continue to rise for eternity.

As for overspending, we are seeing overall loan amounts rise. Average auto loan balances have risen 4.5% year over year, to $13,435 last quarter, according to the Detroit News. That's also a 1.3% sequential increase over the first quarter. Some consumers are taking advantage of low interest rates and longer loan terms to buy more expensive cars.

But for now, there doesn't seem to be a bubble or a problem--  because Americans are keeping up with the payments.

The rate of delinquencies -- auto-loan payments late by 60 days or more -- was flat between the months of April and June, barely rising from 0.79% to 0.80%. "It's encouraging to see consumers take on more auto debt while delinquencies remain low," Peter Turek, TransUnion's vice president of automotive, told the Detroit News. 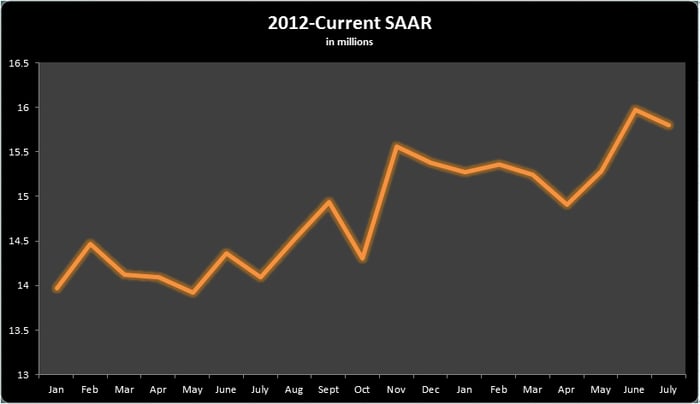 In addition to that, the gradual rise hasn't even put a dent in pent-up demand. The average age of vehicles continues to climb, and as of August, it sits at an all-time high of 11.4 years. That's up from 11.3 last year, and 9.7 years a decade ago, according to R.L. Polk & Co.

Investors' auto bubble fears seem a bit exaggerated. It will be important to watch whether delinquencies begin to rise sharply, but that doesn't appear to be the case right now. As sales continue to rise, especially in the most profitable segments such as full-size pickups, the rest of 2013 still looks profitable for automakers.