The Pending Home Sales Index dropped 1.3% to 109.5 for July, according to a National Association of Realtors (NAR) report released today.

After dropping 0.4% in June following May's six-year high, analysts had expected a slightly smaller 1% dip. Compared to July 2012, pending home sales are up 6.7% and the level is still near a 6.5-year high. 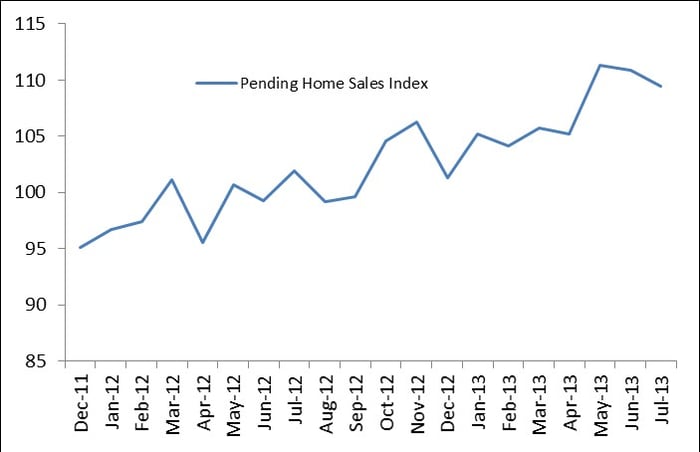 The index is based on contract signings (with sales usually finalized one or two months later) and is benchmarked to 2001 contract activity. (An index of 100 is equal to the average level of contract activity during 2001, which was the first year the association examined data).

NAR chief economist Lawrence Yun noted that more expensive areas are feeling a relatively larger squeeze from recent housing market pressures. "The modest decline in sales is not yet concerning, and contract activity remains elevated, with the South and Midwest showing no measurable slowdown," Yun said in a statement today. "However, higher mortgage interest rates and rising home prices are impacting monthly contract activity in the high-cost regions of the Northeast and the West. More homes clearly need to be built in the West to relieve price pressure, or the region could soon face pronounced affordability problems."

Looking ahead, the NAR expects the median existing-home price to jump 11% for 2013 overall, while existing-home sales are expected to increase 10% for the year.