With major industrial giants like Siemens, Germany is no small fry. As of 2012, it was the fourth-largest economy in the world. The German government's recent announcement that Windows 8 is unsafe due a backdoor called the Trusted Platform Module, is a dangerous omen for Microsoft (NASDAQ:MSFT).

The growth of open-source computing is causing major headaches for Microsoft, and this situation is no different. Linux is open source, and generally has fewer security vulnerabilities than Windows. Government and corporate IT departments are starting to realize that they can make their operations more secure and cut costs by switching from Windows to Linux. Using open-source alternatives to Microsoft Office is yet another way to lower costs. The City of Munich recently moved 14,000 desktop PCs to Linux and plans to save $13 million by using LibreOffice.

European Union austerity is making governments look for cost savings wherever possible. Microsoft is already feeling the pain in its bottom line. In 2013, operating income for the Windows division fell to $9.5 billion from $12.3 billion in 2011, and falling PC sales paint a grim future.

For now, Microsoft's division that sells Office looks better than its Windows division. In 2013, its business division operating income grew to $16.2 billion from $14.7 billion in 2011. The long run is not looking as positive. Microsoft is fighting to win market share in the mobile space, but the reality is that it is not the dominant player it is used to be. Falling Windows market share as a percentage of all computing devices will put a dent in the Windows ecosystem, hurting Microsoft's ability to sell add-on products, like Office.

Microsoft Is Not Alone

Hewlett-Packard (NYSE:HPQ) and Dell (NASDAQ:DELL.DL) have traditionally looked to corporate and government consumers to help ease losses from the public's love of tablets and smartphones. Europe's adoption of open-source software and Germany's recent warning about Windows 8 pose questions that both of these companies need to answer. While it would be relativity easy for both HP and Dell to start offering open-source productivity software, this would only decrease their revenues.

In the face of such profound software challenges, it is time for these firms to take a fresh perspective. Offering Linux on desktop PCs would not be technically difficult, as it is already a common choice for many servers. There are many different flavors of Linux available. But by helping IT departments choose the most appropriate version of Linux, Hewlett-Packard and Dell could become advisers and consultants, instead of just simple hardware providers.

Hewlett-Packard has already realized it needs to move away from the PC market. Its recent quarterly results confirm this, as its software segment was the only segment that grew. Continued competition from mobile caused HP's personal systems to see a decrease in net revenue of 11% year over year. With a profit margin of -2.8% and a return on investment of -30.9%, HP needs time to heal itself. Over the next five years, expect its enterprise and software divisions to grow enough to stabilize its earnings as the company markets itself as a trusted adviser.

Dell is in the middle of a takeover war between its founder and activist investors. A judge recently hurt Carl Icahn's attempt to derail the Sept. 12 shareholder vote on Michael Dell's takeover bid. Dell is profitable, with a profit margin 2.4%. It has an ROI of 12.6%, and a manageable total debt-to-equity ratio of 0.67. But for the majority of investors, it is best to sit on the sidelines. The company's stock price is being driven by news and rumor, not fundamentals. 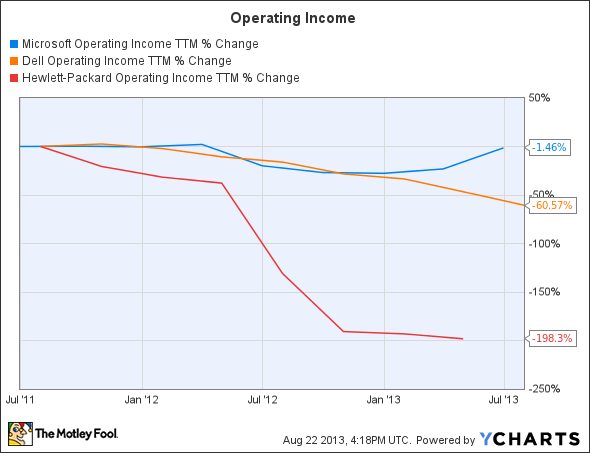 Between Microsoft, HP, and Dell, HP is one company to keep your eye on. Its operating income is stabilizing, and in the long run it may be able to benefit from Microsoft's difficulties. HP could offer consulting services and help customers choose which version of Linux is best for their needs, differentiating it from basic hardware resellers.

Microsoft's operating income is slowly coming back from its 2012 dip, but its future is looking grim. Germany's recent security announcement could scare away large customers from Windows altogether. Microsoft is a value play to keep your eye on, but it is best to wait and see how Germany's allegations will impact enterprise sales. Dell is too volatile and news-driven.