With the launch of Motorola Mobility's new Moto X, Google (NASDAQ:GOOGL) becomes the first tech company to be able to stamp "Made in the U.S.A." on a smartphone. While it's not the first tech product to have its manufacturing "onshored," it is the first smartphone and with that comes some benefits for consumers, such as being able to order and receive custom designs within days.

There was a lot of concern whether Google would be able to keep its manufacturing costs under control, since that was one of the reasons behind Apple (NASDAQ:AAPL), Dell, and Hewlett-Packard sending responsibility for assembling their products overseas. While it also made sense because of the network of components suppliers that were domiciled in Asia, it can't be denied that labor costs were a big factor, and China in particular had a large and willing workforce for the task.

Yet a new review by the market researchers at IHS found that the Moto X has a bill of materials that are comparably priced with foreign-sourced smartphones that could herald a return of tech manufacturing jobs to American shores.

In its report, IHS says that after tearing down the Moto X, the preliminary total BOM is just $214, which combined with $12 in manufacturing costs, gives the smartphone a total cost to produce of $226, smack in the middle between Apple's iPhone 5 at $207 and Samsung's Galaxy S4 at $237. 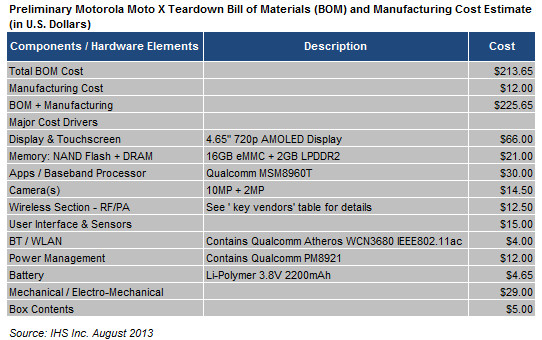 To keep its price low, Google apparently hasn't blazed many trails in design or hardware, but functionality remains comparable with foreign-sourced rivals and use of popular, readily available components like chipsets from Qualcomm, which are currently in high production, means costs are kept to a minimum.

IHS goes on to say that with a retail price between $540 and $580 and carrier subsidies around $300, the Moto X is on the prowl for grabbing attention with wireless carriers who typically subsidize Apple and Samsung to the tune of $400 per smartphone.

The news reflects something of a trend among tech companies to repatriate jobs to America. Apple announced last year that it would be producing some Macs in the U.S. and Google's own failed Nexus Q was made here. Even Chinese computer maker Lenovo has said it will begin producing ThinkPads in the Land of the Free.

While the "Made in the U.S.A." label gives manufacturers some marketing heft to their products, the real reason for this sudden shift in focus could be that China is no longer the attractive economy it once was. Based on its success in recent years -- it surpassed the U.S. in 2010 as the world's largest manufacturing muscleman -- wages are rapidly rising, up 14% in 2012 and another 10% so far this year. Apple's assembler in China, Foxconn, hiked wages anywhere from 16% to 25% in April.

Nor are these higher costs endemic just to the tech sector. As far back as 2010, handbag maker Coach began looking to Vietnam and India as home for its manufacturing to reduce costs, and others are combing Malaysia, Thailand, and elsewhere for cheap ports of call. Though its robust infrastructure that supports its larger labor pool has set China apart from its neighbors, in time that will level out and put its rivals on a  more equal footing.

Still manufacturing jobs are being relocated to the U.S. In recent years GE and Caterpillar have made such shifts, and French airplane maker Airbus opened a plant in Alabama last year. The depressed economy here and its sluggish recovery has made the U.S. more attractive to manufacturers as median household income has continued to fall since the recession supposedly ended.

In short, though, the success of the Moto X won't stand on whether it was made in Texas or China (as the Nexus Q attests), but whether the technology resonates with consumers. It's up to consumers now whether they'll respond to the smartphone's features, but at least Google can say it's got the cost side of the equation down. And that's something worth hanging the bunting for and waving the flag over.