Light-emitting diode manufacturer Cree (NASDAQ:CREE) cratered earlier this month after the company's first-quarter guidance came in below consensus estimates. The company has been on a stellar run so far this year, but lost 20% of its market capitalization in a single day, even though it witnessed terrific growth in its earnings and revenue.

However, Cree is a pure-play LED lighting company, and so, the recent drop looks like a good opportunity for investors to add to their positions. According to a McKinsey report, the worldwide LED lighting market will be worth $94 billion by 2020, making for 60% of the overall lighting market . And being a specialized player in this industry, Cree is in a good position to benefit from this opportunity and has done well so far. 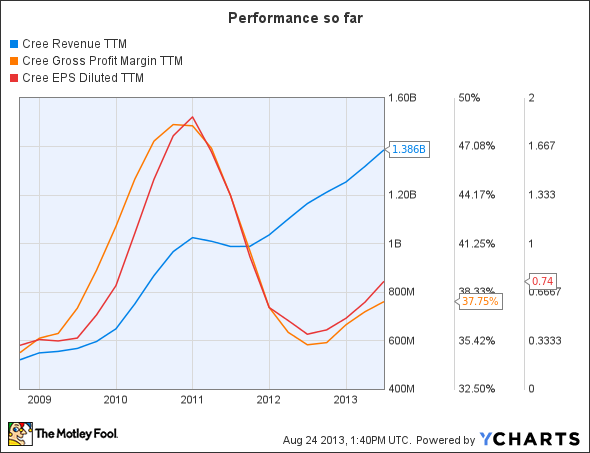 Since it is a fast-growing company, Cree is expected to have fluctuating margins as it invests in growth. The important point to consider right now is revenue growth, and the ascending revenue curve suggests that Cree's products are finding takers.

The recent revenue guidance of $380 million to $400 million -- against the consensus estimate of $398.4 million -- might have been a dampener on the stock price, but the long run still looks promising .

Cree's backlog for the ongoing quarter is better than the preceding one. Going forward, management sees the shift to LED lighting as a strong tailwind and is ramping up sales of its LED bulb. Sales of its lighting products had increased 48% in the previous fiscal year to $500 million as LED adoption improves and the company expects this trend to continue in the future .

Cutting-edge products
Cree has been undercutting bigger players such as General Electric (NYSE:GE) with its 40-watt replacement LED light bulb, which sells for under $10 . In comparison, GE's 40-watt replacement bulb sells at a much higher price point of around $25 on Amazon. Moreover, while GE's light delivers the same 450 lumens as Cree's offering, it consumes 50% more electricity.

Cree is a fraction of GE in terms of size, but its pure-play nature has helped it deliver a cutting-edge product at a lower price. Moreover, Cree recently released an upgrade kit that would enable consumers to move from fluorescent fixtures to LEDs for under $100.

Similarly, its recently released XSPR Series Street Light, which sells for $99, is aimed at replacing sodium street lights and is also 65% more energy efficient. Apart from these moves, Cree is also focused on reducing costs, driven by a mix of higher LED fixture revenue and production efficiencies in the manufacture of its low-cost LED bulb.

According to the forecast for the current quarter, revenue from LED fixtures and LED bulbs is expected to remain constant. But investors should be focused on the long-term prospects of the company and the industry. There will be margin issues as Cree looks to capture the market and prices its products aggressively.

Its trailing P/E of 77 might seem very high. But earnings grew 52% in the previous quarter, and there's a huge opportunity ahead in the LED lighting industry. So, a premium valuation shouldn't scare away investors.

Needs to stay ahead
But where there's opportunity, there are competitors. Cree needs to stay ahead of the likes of GE and Koninklijke Philips (NYSE:PHG) in the LED market. While GE's bulb might be selling at a higher cost, the sheer size of the company can help it attain economies of scale if it elects to produce LEDs on a large scale, thereby reducing costs.

Similarly, Philips recently took the wraps off a prototype LED light, which it says is the world's most energy-efficient light. Philips intends to launch this product in 2015 and expects the price to be competitive with current LEDs. The company also promises that the light will consume half the energy of the leading LEDs. By that time, Cree would need to up its game to fight these behemoths.

The bottom line
Even after the drop, Cree is up more than 70% this year. The recent crash looks like a good opportunity for investors as Cree's product developments advance and the opportunity ahead in the LED market remains enticing.