Facebook's impressive gains
Recent data from eMarketer suggests that, not only is Facebook making impressive progress in mobile advertising, but it's also making huge gains in market share in the mobile ad market. Compared to 2012, when the company first began monetizing mobile, the company's market share of total mobile Internet ad revenue worldwide is expected to triple in 2013, from 5.35%, to an estimated 15.8%, according to eMarketer's estimates. 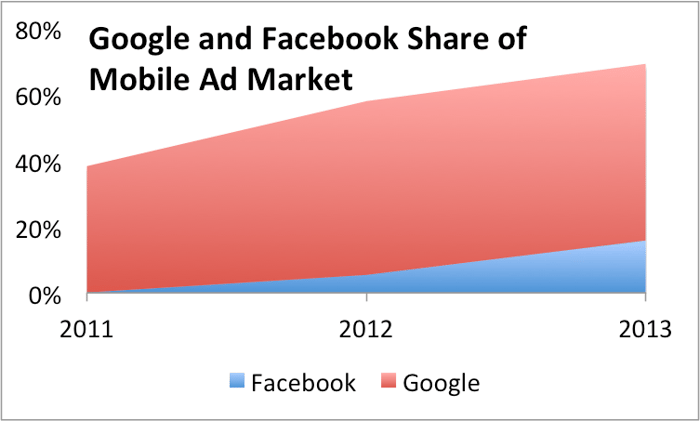 Source: Data retrieved from eMarketer. 2013 based on eMarketer forward-looking estimates.

eMarketer asserts that Facebook's growth in mobile ad share is due to the company's "continued emphasis on mobile monetization, along with its users' ongoing shift toward mobile devices."

Meanwhile, Google gained just under one percentage point in market share during this same period, from 52.36%, to 53.17%. If Facebook is gaining market share more quickly than Google, doesn't this imply that Facebook is eating into Google's opportunity? Nope.

Not at Google's expense
There are two key reasons why Google shouldn't be worried about Facebook. One, Facebook's gain came mostly from internal opportunities.

Most of Facebook's market share gain, therefore, came from figuring out how to effectively monetize its mobile users, combined with its fast-growing mobile user base. Its gains did not come at Google's expense.

Two, Google's in a different line of business.

Though Google isn't gaining much in terms of market share, it is in absolute dollar amounts. Google's mobile ad revenue between 2012 and eMarketer's 2013 estimate should increase by about $4.2 billion. eMarketer estimates Facebook's will only increase by about $2.1 billion.

As the overall mobile ad market nearly doubles between 2012 and 2013, the fact that Google actually gained market share on an already impressive lead shows just how strong of a hold the company has on its market. In fact, to make eMarketer's estimates true, the company will have to nearly double its 2012 mobile ad revenue.

eMarketer said that Google's gain is primarily a result of the company's success in mobile search and better monetization of YouTube -- two lines of business that Facebook has very little overlap with.

Google and Facebook are both looking solid
There's no reason (yet) for Google to be worried about Facebook. In fact, eMarketer's stats provide solid evidence that both companies are doing very well in the mobile market -- a solid reason to give both stocks a closer look for consideration in your portfolio.