Verizon (NYSE:VZ) built, and currently operates, Verizon Wireless in a partnership with British peer Vodafone (NASDAQ:VOD). The two companies have often sent signals that they'd like to shift the entire network into Verizon's hands, but foreign taxes make such a deal incredibly expensive.

Have the companies found a way around the tax problem?

This week, The Wall Street Journal and others have reported that Vodafone and Verizon are talking about a permanent solution again. Verizon upped its deal budget from $100 billion to $130 billion, according to anonymous sources, and a significant portion of the higher bid would go toward paying those burdensome international taxes.

$130 billion is a lot of money, even for a Dow Jones (DJINDICES:^DJI) component with decades of profitable operating history. Verizon would have to dip into cash reserves, borrow up to $50 billion in fresh loans, and also give Vodafone a generous amount of Verizon shares as compensation.

The share-based portion is important because it gives Vodafone more incentive to sign the deal. The Brits would essentially become Verizon's largest shareholder, far surpassing the 6% stake of Verizon's current largest owner, BlackRock. The BlackRock investment is worth about $8.3 billion; Vodafone's interest would be an order of magnitude higher.

This fits well with Vodafone's global growth strategy and would give the company a serious war chest to invest in further expansion elsewhere.

The smartphone era has been very good to Verizon, as well as its biggest competitor and fellow Dow telecom, AT&T. Both companies have absolutely crushed the overall Dow's returns since the smartphone market took off in 2008. We're past the era of feature phones and hardwired subscriptions, so this trend could continue well into the future. 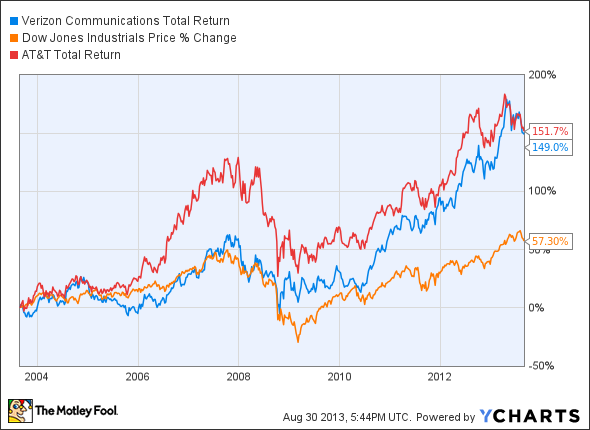 Investors don't love the rumored Vodafone deal, and Verizon shares are posting some of the Dow's largest losses today. The high up-front costs do look daunting, and there would likely be some more short-term pain for Verizon investors if the rumored deal is signed, sealed, and delivered. But when you put your long-term lenses on, it's a genius move that would benefit shareholders greatly for many years ahead.

The best move might be to wait for the inevitable plunge and then lock in a solid long-term position at rock-bottom prices. You could also simply add Verizon and Vodafone to your Foolish watchlist to keep a close eye on the situation.