A quick search on the Internet could lead us to several bullish articles on fabless semiconductor, Broadcom (NASDAQ: BRCM). Even after a disappointing earnings call, most analysts remain bullish on this company, and the fact that its stock may be very undervalued is popular opinion on the Street. The average target price of the sell-side is $34 dollars per share, representing a 35% upside. But, if Broadcom is really undervalued, why has negative sentiment persisted for so long ? 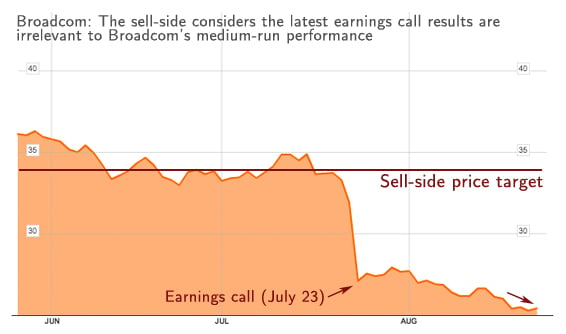 The rise of Qualcomm

Nearly half of Broadcom's revenue comes from its mobile and wireless segment, where the firm has to compete against giants like Qualcomm (NASDAQ:QCOM), a strong player in the mobile arena and an early mover in the 4G LTE connectivity field. Unlike Qualcomm, Broadcom doesn't currently offer a 4G LTE solution. The company has promised one by mid-2014. But in the meantime, this promising market belongs to Qualcomm.

Broadcom's main cash cow, 3G solutions, will be replaced in the next few years by 4G LTE solutions. Intel (NASDAQ:INTC) also has strong exposure to 3G solutions, and reported weak sales in this business.

Additionally, Broadcom competes with Qualcomm in almost every one of its business segments. It already lost a good number of low-cost smartphone sockets to Qualcomm. Instead of Broadcom's products, Qualcomm's connectivity chips were chosen for the Motorola Moto X and the Samsung Galaxy S IV Mini.

The important handsets to watch next are the iPhone 5S and 5C. Broadcom's negative market sentiment could increase if Apple decides to use Qualcomm's connectivity chips for both the iPhone 5S high-end and 5C low-end models. After all, the new Qualcomm RF360 Front End Solution chip could allow the iPhone to run on all 2G, 3G and 4G LTE networks. That could save time and money for Apple, as it won't have to design a cell phone for each network, like it did with the iPhone 5.

Losing some models does not mean Broadcom is losing the market. However, losing the iPhone business could add meaningful damage to the company's revenue base. Broadcom can't afford losing big clients, especially after it lost its business with Nokia when the Finnish company shut down the Symbian platform and moved to Windows-based handsets.

In this way, increasing competition from Qualcomm and a weaker demand for 3G connectivity semiconductors could keep hurting Broadcom's business. Notice that Broadcom's sales in this segment contracted almost 3% last quarter. That may be just the beginning.

Bulls have faith in Broadcom's army of engineers and massive R&D budget. They believe the company will manage to keep itself as a leader in the mobile connectivity arena.

Even if that's true, they shouldn't expect to find great margins here. Fierce competition against Qualcomm is unavoidable, and a Price war could be in the making. Furthermore, to keep themselves in the game, both Qualcomm and Broadcom must continue investing in technology. In my opinion, these are reasons strong enough to assume margins of 20%, at the most. 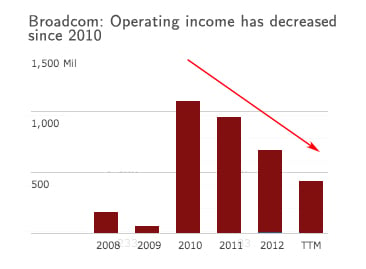 Notice also that in the short-term, Broadcom's operating margins will also be affected by its traditionally high stock compensation expenses, the costs associated with the acquisition of NetLogic, and associated impairment charges.

If you are interested in the semiconductors industry, there may be better risk/reward asymmetries. Trading at 35 times earnings, Broadcom doesn't look particularly attractive.

Trading at 17 times earnings, Qualcomm, whose chip business was up 8% sequentially, offers better risk/reward. Downside risk is reduced by the fact that handset makers must pay royalties to Qualcomm for having their mobile phones functioning on a CDMA-based network. And unlike Broadcom, Qualcomm gave strong guidance for the upcoming quarter. It is expecting chip unit shipments of $171 million-$181 million.

Intel, on the other hand, may be too exposed to the PC processor business, which is experiencing a massive contraction caused by a consumer shift toward tablets and smartphones. Furthermore, Intel's 3G connectivity solutions business will suffer from the shift toward 4G. Because of a declining PC industry, the increasing popularity of ARM chips and difficult macroeconomic conditions, revenue decreased 1% in 2012 and, in the best of cases, will remain flat this year.The latest earnings call showed the chipmaker's revenue was down 5% from the year-ago quarter.

Intel's management is trying to renew the business as fast as possible. To take advantage of the 4G market, which is expected to grow at 47% over between 2012-2016, Intel began shipping single-mode 4G chips in early 2013.The problem is that, unlike Qualcomm's latest chip, single-mode chips can not support old 2G and 3G networks.

Therefore, while Intel is making steady progress in penetrating more attractive markets (like the smartphone and tablet processor segment with its Atom line), a meaningful impact on sales is unlikely to happen during the next two quarters.

Even if Broadcom manages to keep most of its current market share, margins are bound to remain low. In the absence of short-term catalysts, negative market sentiment won't disappear, probably causing Broadcom's share price to remain depressed. The company offers value in the very long run, but for those with a shorter time horizon, Qualcomm may be a better investment choice.