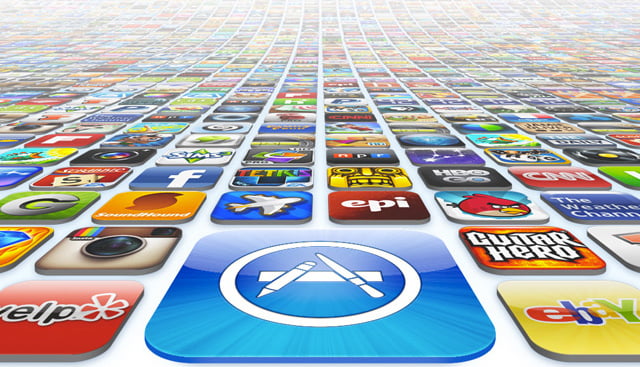 Apple's (NASDAQ:AAPL) iPhone unit sales were up 142% from the year-ago quarter. iPad sales were up 183%. It was the company's third quarter of 2011 and Apple was the hottest stock on the Street.

Those were the days of the smartphone revolution. Investors who held Apple stock between 2005 and 2011 watched shares soar 1,100%. Or, in Peter Lynch lingo -- that's a 12-bagger.

But with the end of one revolution, a new one begins. In fact, it's already upon us. I'll call it the app revolution. It refers to the services benefiting from a massive (and still growing) installed base of constantly improving smartphone technology. Sure, this revolution began its ascent soon after smartphones hit the market -- but this baby is still in its prime.

4 numbers that prove the app revolution is kickin'

Which companies will benefit?
There is a whole array of companies benefiting from the app revolution. Really, any company providing services that are enhanced through mobile has the opportunity to cash in and ride the wave, including social networks, search, and location-aware services, to name a few.

But where the growth is, competition will surely intensify. That's why the best practice is to find services in the mobile space that are already the best at what they do. Even more, look for signs of a competitive advantage. Efforts like this may leave fewer choices, but the few left will be potential investments, not risky bets. Then, of course, you have to consider price.

Yelp (NYSE:YELP)
Cumulative reviews are up 41% from the year-ago quarter. Active local business accounts have soared 62%. Yelp is the typical example of a company benefiting from the app revolution: A location-aware service that connects people with great local businesses, 59% of searches came from mobile.

But at 19 times sales, is the lofty valuation worth the opportunity? That's a tough one. With management guiding for about 220 million in revenue in 2013, Yelp is still a small player with too many uncertainties to merit its price.

Facebook
Bam! That's the sound of the sudden monetization of a half of a billion monthly active users in one year's time. In the second quarter of 2012, Facebook's 543 million mobile monthly active users were nothing but a giant untapped opportunity. Swiftly, and almost suddenly, Facebook changed all that. Today, 41% of Facebook's ad revenue comes from mobile.

Going forward, Facebook likely still has enormous room for improvement in monetizing mobile. With 41% of ad revenue coming from mobile and 71% of the company's monthly active users on mobile, Facebook is still making far more revenue per user on desktop than it is on mobile. Though this could be viewed as a weakness, it could also be viewed as a huge opportunity. Given Facebook's performance so far, I'd go with the latter.

Most importantly, the company looks poised to endure for decades. Facebook is wildly profitable with a 74% gross profit margin and its powerful network effect should keep users glued to the service.

Unfortunately, the stock isn't undervalued -- but that doesn't mean you can't nibble on a few shares to hold for the long haul.

Keep your eyes peeled
Yelp and Facebook are just two stocks benefiting from the app revolution. A few other examples worth looking into might be LinkedIn, Google, Baidu, and Zillow. There won't be any dirt-cheap bargains, but investors shouldn't let their initial thoughts on valuation prevent them from digging deeper.

This year, 52.2% of all mobile phones shipped worldwide will be smartphones, according to IDC. Already, Apple and Google have an installed base of 600 million iOS devices and 900 million Android devices, respectively. The foundation has been laid, and now it's time for mobile services to reap the rewards.

There's still time to profit from the app revolution.

What companies benefiting from the app revolution have made it into your portfolio?

It's Not Too Late to Profit From the App Revolution @themotleyfool #stocks $FB $YELP $AAPL $GOOGL $ZG $LNKD.DL $BIDU Next Article
Current