Katie Spence
(TMFKSpence)
Author Bio
Katie Spence has been a financial journalist for The Fool since 2011. She specializes in defense companies, “green" technology, autos, and robots. Follow me on Twitter for breaking news in the defense, auto, and robot industry. Follow @tmfkspence

Last year, Geely Automobile Holdings' Volvo launched its first-ever V60 diesel plug-in hybrid, and this year, its popularity has skyrocketed. So far, it's sold out across Europe, was one of three finalists for the 2013 Green Car of the Year award, and was Volvo's most popular new car launch, ever. What's more, this success may pave the way for an American launch of a Volvo plug-in. Here's what else you need to know.

The battery that powers the V60 PHEV is an 11.2 kWh lithium-ion battery, but it uses only 8 kWh. Further, Volvo states that under Europe's New European Driving Cycle, the official fuel economy figure is 155.2 mpg. The car also has AWD, a five-star crash rating, a full SE Lux specification, and the ability to drive in three different modes: Pure (all electric), Hybrid, and, Power (all diesel). And it can seat five and with plenty of room left for storage.

Volvo had been slow to release a "green car," citing lack of demand, and the V60 isn't available in the United States. However, the success of the V60 PHEV may be enough to change Volvo's mind. And even if Volvo doesn't bring this car to America, there are a number of concept models, such as the XC60 PHEV SUV, that Volvo sees as marketable in the U.S. and China. Considering the U.S. and China are the two biggest names when it comes to automotive sales, a hot-selling PHEV would be great for Volvo.

Volvo's future
Volvo has already shown that its V60 PHEV is a powerful force in the sales department, so if the company decides to release it in the U.S., or introduce a different PHEV, it will be something to watch.

Electric vehicles have been slowly gaining in popularity -- whether it's a PHEV, a BEV, or any other variation. But sales for EVs are still low and make up only a limited market share. Consequently, any new EV release will probably affect other EV sales. Here's an example: At the beginning of 2012, there were really only three comparable EVs available -- General Motors' (NYSE:GM) Chevy Volt, Toyota's (NYSE:TM) Prius Plug-In Hybrid, and Nissan's (OTC:NSANY) Leaf. 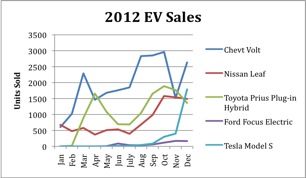 Overall, the Prius Plug-In sold relatively well -- in fact, it was the second best-selling plug-in. But in May, Ford saw its first sales of the Focus Electric, and that was followed by more EV releases. By 2013 there were a number of EVs available -- and Toyota saw a steady decline in sales. 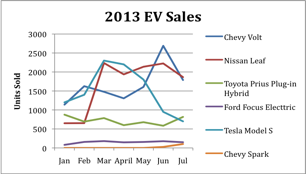 As 2013 has progressed, more EVs -- such as the Chevy Spark -- have become available, and the Volt and Leaf have struggled, while sales of other EVs have climbed. Thanks to the limited market, having more EVs come to market dilutes other EV sales.

What to watch
Right now, sales for the V60 PHEV are incredibly strong and seem to be getting stronger. That makes it a game-changer for Volvo. However, Volvo's production of the V60 PHEV is limited, and it's a diesel, so It may not make it to the U.S anytime soon -- although there are rumors to the contrary. If the V60 PHEV does come to the U.S., this is a vehicle to watch -- not only for what it can do for Volvo's profits, but also for how it could affect other EVs', and in particular Tesla's, sales.