Today's release of the Beige Book garnered more attention than usual, and automotive sales came in stronger than expected. Here are the details.

Today the Federal Reserve published its monthly Beige Book, and market watchers were paying more attention than normal. This time around, investors were looking at how the Fed was interpreting the economic data from around the nation. In summary, the Fed suggests that national economic activity continued to expand at a modest to moderate pace from early July through late August. Consumer spending rose in most districts, reflecting strength in automobile sales and housing-related goods.

That has kept the market trading steady as long-term investors become more comfortable with the economy but short-term traders worry that the Fed will begin to wind down its bond-buying program. The Dow Jones Industrial Average (^DJI 0.06%) is up 108 points as of 2:45 P.M. EDT. Here are the details on the movers and shakers in the market today.

Starting outside the Dow, General Motors (GM 0.83%) and Ford (F 0.75%) are up 4.8% and 3.9%, respectively, after reporting stronger-than-expected sales in August. GM's sales figures were the most impressive, with each brand under its company umbrella reporting double-digit sales gains in August. Cadillac was up 38%, Buick was up 37%, GMC was up 14%, and Chevrolet grew 10%. Altogether, that led to a companywide increase of nearly 15% to more than 275,000 units sold -- the most units sold in the U.S. by any automaker.

Ford also had an impressive month -- its best in seven years, in fact. That said, the biggest takeaway from America's two largest automakers was the continued sales performance in the full-size pickup segment, which is the most profitable segment by a long shot. Ford's F-Series remains the best-selling truck for the 36th straight year, and its sales topped 70,000 for the second time this year -- a huge accomplishment, considering Ford has said anything above 50,000 is a great month. 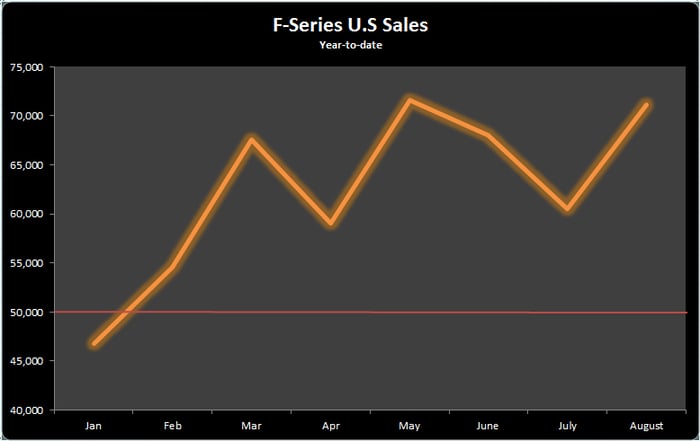 Sales of GM's Silverado and Sierra cooled off from a hot July and posted respective increases of 13.9% and 24.3% increase in August versus last year. This segment drives the majority of profits for GM and Ford and looks to contribute to a strong third-quarter earnings report. Management also said they believed sales at this level could be sustainable in current economic conditions, which is great news for automotive investors.

Inside the Dow, the biggest gainer is tech giant Intel (INTC 1.17%), up 2.7%. Intel unveiled new chips that are aimed at data centers and the cloud-computing market. Its low-power Atom C2000 chip will enable Intel to expand into new growth markets such as cold storage and entry-level networking. Intel is currently the largest semiconductor company in the world, and it continues to pour a lot of resources into research and development to maintain its already strong competitive advantage. That has some investors optimistic that it can remain a viable investment even amid the drastic decline in the PC market.

Boeing (BA 0.89%) is another strong performer in the Dow today, up 1.5%. Today Boeing delivered the first 767-300 Freighter to FedEx, which is upgrading its fleet with more fuel-efficient aircraft. Fuel efficiency has become increasingly important to airlines and companies alike. According to James R. Parker, executive vice president of air operations, FedEx Express: "The 767 is approximately 30 percent more fuel efficient and has unit operating costs that are more than 20 percent lower than the aircraft they will replace. The net effect is an aircraft that is more affordable to operate and has lower carbon emissions because of better fuel efficiency." Boeing looks well-positioned to take advantage of companies that are replacing their fleets with modern airplanes, as fuel costs have doubled as a percentage of overall costs over the last decade.