The race picture just got simpler.

September isn't living up to its grim historical reputation so far as U.S. stocks racked up their second day of gains on Wednesday, with the S&P 500 (^GSPC -0.72%) up .8%, while the narrower, price-weighted Dow Jones Industrial Average (^DJI -0.50%) managed a 0.7% advance.

Those gains are consistent with the action in the CBOE Volatility Index (^VIX 1.07%), which fell 4.4% to close below 16. (The VIX, Wall Street's "fear index," is calculated from S&P 500 option prices and reflects investor expectations for stock market volatility over the coming 30 days.) However, I'm surprised to see that a "Syria premium" -- the Obama administration appears to moving down the road toward a military strike against the Assad regime -- no longer seems to be embedded in the index.

Mobile wars: The race picture just got simpler
This week may prove to be a critical juncture in the "mobile wars." First, on Tuesday, Microsoft (MSFT -0.26%) announced that it will acquire Nokia's handset unit and license its patents and mapping services in a $7 billion deal. Nokia had committed itself to Microsoft by choosing to run its phones under Windows Mobile rather than Google's Android operating system, so this deal may well be the best possible outcome for Nokia (indeed, the shares spruced up to the tune of a 31% gain on the day).

For Microsoft, however, there is no guarantee it won't end up taking its new bride over Lover's Leap -- the track record of the Redmond, Wash., software concern in consumer devices is hardly encouraging (with the possible exception of the Xbox).

That was yesterday. Today, The Wall Street Journal reported (sign-up may be required) that Canada's BlackBerry (BB -3.56%), once the market leader in email- and web-enabled phones, is seeking to run an accelerated auction process that could see the company acquired by November. Why the hurry? A look at the company's five-year stock graph should provide a clue: 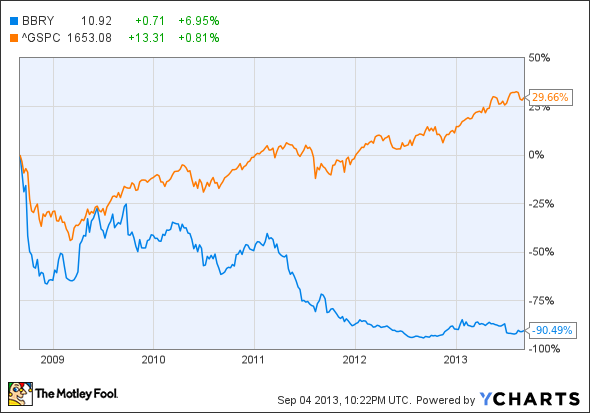 BlackBerry has been destroying shareholder wealth at a furious pace: The stock has lost nine-tenths of its value during this period. At that rate, no wonder the company is eager to sell itself. Barring a sale, there is little reason not to extrapolate the trend in that graph until shareholders are left with nothing. The sooner BlackBerry is sold, the more value shareholders will be able to salvage.

That said, just because BlackBerry wants to do a deal doesn't mean anyone else wants to do it with them. The recent deal record in this sector is mixed, at best. In April 2010, Hewlett-Packard agreed to buy handset maker Palm; less than 18 months later, HP announced it was shuttering its mobile devices unit, which included virtually all of Palm's legacy assets.

Fool contributor Alex Dumortier, CFA has no position in any stocks mentioned; you can follow him on LinkedIn. The Motley Fool owns shares of Microsoft. Try any of our Foolish newsletter services free for 30 days. We Fools may not all hold the same opinions, but we all believe that considering a diverse range of insights makes us better investors. The Motley Fool has a disclosure policy.