Another Bakken driller is bulking up on the play.

Acquisition activity in North Dakota's Bakken oil play continues to be strong this year. Earlier this year Kodiak Oil & Gas (NYSE: KOG) bulked up on its Bakken position via a $660 million deal, while just last month Whiting Petroleum (WLL) spent $260 million to add acreage. Now Oasis Petroleum (OAS) is getting in on the action with a major $1.52 billion Bakken buy.

The Oasis deal is large on a number of fronts. It actually is four separate and unrelated purchase agreements. In total, these deals add 161,000 net acres to the 331,000 net acres the company already holds bolstering its position by almost 50%. In addition to this, the deals add 9,300 barrels of oil equivalent production, which will boost that by nearly a third. Finally, the deals add proved reserves of 45.7 million barrels of oil equivalent as well as 618 net future drilling locations, which represents boosts of 27% and 40% respectively. Any way you slice it, this is a really big buy.

Most of the acreage that Oasis is acquiring are in the oil rich counties of Williams and McKenzie and adjacent to much of its current acreage. That's important to take note of for two reasons. First, similar to investing in real estate, location is critical to oil and gas companies. What Oasis is doing is buying into the best locations in the Bakken. Williams and McKenzie counties have been particularly hot this year with both Kodiak and Whiting in adding acreage in these counties. In addition to that, the acres Oasis is adding is located in close proximity to it's current position. That's really critical in improving its scale and returns, especially when it comes to utilizing its infrastructure and keeping its costs down.

As the following slide details, the acquired acreage really does fit like a glove in terms of both extending Oasis' core position and in relation to its already developed infrastructure: 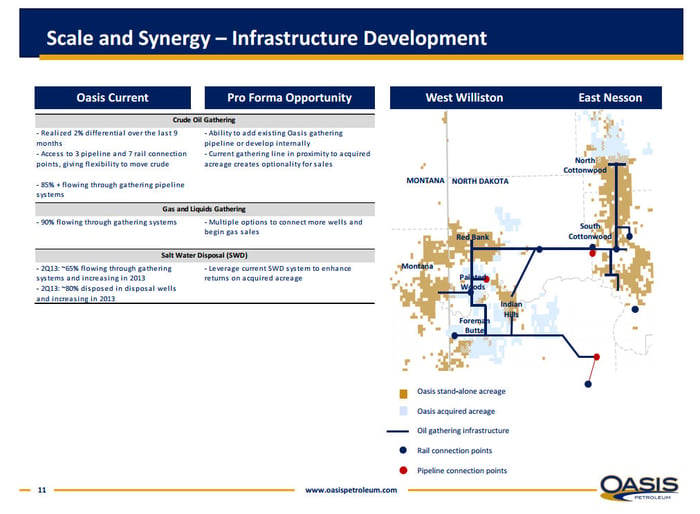 If there is one concern about the deal, it is the fact that Oasis might be biting off more than it can chew if oil prices were to take a dive. The $1.52 billion deal is sopping up nearly every drop of its current liquidity of $1.66 billion. While it's not in any danger right now, especially with the price of oil as high as it has been, it is an area to keep an eye on.

Overall though, Oasis is picking up what appears to be very solid acreage in the oil rich areas of the Bakken. As long as the price of oil stays over $100, Oasis' big bet should really pay off over the long-term. That makes this deal a pretty solid one for its investors.

Fool contributor Matt DiLallo has no position in any stocks mentioned. The Motley Fool has no position in any of the stocks mentioned. Try any of our Foolish newsletter services free for 30 days. We Fools may not all hold the same opinions, but we all believe that considering a diverse range of insights makes us better investors. The Motley Fool has a disclosure policy.