Last quarter ExxonMobil (XOM 0.87%) made $6.9 billion. That's more money than most of us can even fathom. What's really incredible is that its profits actually plunged 57% from $15.9 billion a year ago. While last year's number was inflated by a massive $7.5 billion gain on a sale, ExxonMobil flat out makes an incredible amount of money.

What's even more incredible, even with its massive size, the company actually enjoys higher returns than any of its big oil peers. Last year the company earned an astounding 25.4% return on the capital it employed, which is the ratio that represents how efficiently and profitably ExxonMobil spends its money. That number easily bested fellow big oil brethren Chevron (CVX 0.14%), BP (BP 0.80%) and Shell (RDS.A). ExxonMobil actually embarrassed its big oil peers as the only peer to come close was Chevron, which still only delivered about a 20% return on capital employed.

This wasn't just a one off occurrence either. ExxonMobil has dominated these peers for the past five years. Take a look at the following chart and notice that ExxonMobil's five-year average return on capital employed is running around 25% while the average of its peers are running well below that number. Clearly, the key to ExxonMobil's long-term performance are the returns it enjoys on the capital it invests. 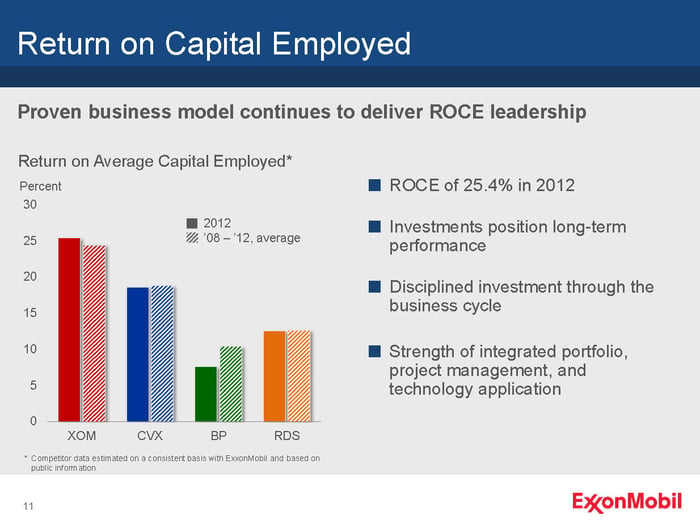 Despite those returns, ExxonMobil catches a lot of flak because it's not growing its oil production. Just this past quarter its overall production actually slipped by 1.9%. Unlike so many energy companies today ExxonMobil isn't focused on growth at any cost, instead it's focused on pursing growth that will deliver the highest economic returns.

For example, a look at the company's production last quarter shows that its U.S. natural gas business declined by 8.1%. Because natural gas prices in the U.S. are still low, ExxonMobil has made the decision to focus its investment dollars elsewhere. One of the places ExxonMobil has chosen to invest in is Canada, which just happens to hold the world's third largest oil reserves thanks to its oil sands.

This past April ExxonMobil was able to begin production at its massive Kearl oil sands project, which is producing about 110,000 barrels of oil per day. Its needle moving investments like Kearl that will drive ExxonMobil's earnings in years to come. It's one reason why the company is already working on a project at Kearl to double production there by 2015.

Even with projects like Kearl, the knock against ExxonMobil continues to be that the company is putting profits over production at a time when the world needs more oil. This is a company that spent $162 billion over the past five years, and yet it wasn't able to grow its production. Instead, it used its leftover cash flow to pay its investors $44 billion through dividends and buybacks, money that could have been invested to grow production.

That is a trend that's not likely to end. Looking ahead, ExxonMobil is only expected to grow its production from 4.2 million barrels of oil equivalent per day, or Boe/d to 4.8 million Boe/d. This is about 14% by 2017, which is around 2-3% each year. For ExxonMobil, that growth is focused on projects that will drive economic returns. This is evidenced by the fact that oil and other liquids production is expected to grow by about 4% annually, while less profitable natural gas will just grow about 1% each year.

The reason why ExxonMobil makes so much money is because it has disciplined itself to only invest in high return projects. That philosophy might not sit well with some investors or consumers, but it is a strategy that has enabled it to double the return of the S&P 500 over the past decade, while crushing the returns of rivals BP and Shell. Only Chevron has done better over the past decade.

Fool contributor Matt DiLallo has no position in any stocks mentioned. The Motley Fool recommends Chevron. Try any of our Foolish newsletter services free for 30 days. We Fools may not all hold the same opinions, but we all believe that considering a diverse range of insights makes us better investors. The Motley Fool has a disclosure policy.