Rupert Hargreaves
(RupertHargreav)
Author Bio
Rupert has been writing for the Motley Fool since December 2012. He primarily covers tobacco and resource companies with a passion for value-oriented investments. Follow @ruperthargreav1 .

Rising capital expenditures, write-downs, and falling profits are all factors that are now affecting gold miners, pushing stock prices and valuations to lows not seen since, well in some cases, ever.

However, despite these well publicized factors, one of the bigger issues affecting the companies is the creeping price of gold production, which has been rising much faster than inflation and the price of gold over the past three years.

Indeed, the all-in sustaining cash cost of producing one troy ounce of gold for Barrick Gold (NYSE:GOLD), Goldcorp (NYSE:GG), and Newmont Mining (NYSE:NEM) has expanded at a compounded annual rate of 19.3%, 5.7% and 21.3% respectively over the past four years (that is including the estimated all-in sustaining cash production cost for this year).

In comparison, the price of gold production has grown at a much faster rate, rising rapidly at all three producers in the four year period.

Unfortunately, this cost inflation is not set to slow down anytime soon. 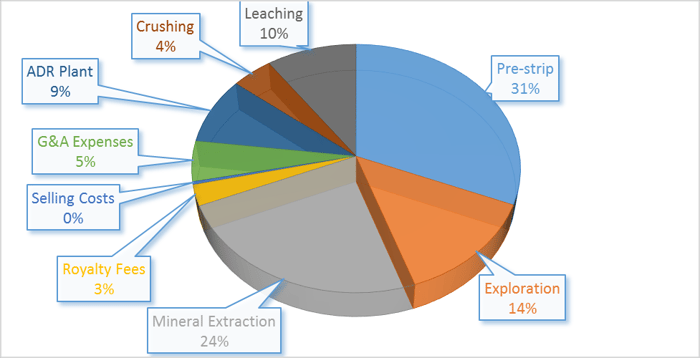 Obviously, the majority of gold's production cost comes from the cost of employment, which is shown on the right side of the chart.

Wages for workers are placed into three sections, exploration, mineral extraction and pre-strip. All three of these costs are set to rise over the short, medium and long term as gold becomes harder to find and extract. Longer mining times will lead to more expenditure on mining equipment and wages. Additionally, exploration, which is being driven to even more extreme environments, will require more compensation for the risks workers take on.

69% of the price of producing an ounce of gold is related to labor, and these costs are set to continue rising indefinitely, at least in line with inflation if not more.

So, what are these companies doing to offset costs?
As the world's largest gold producer by output, Barrick is leading by example. The company has shelved or cut $4 billion of previously allocated capital expenditures over a four year period. In addition, the company has plans to suspend, close or divest high-cost production mines in an attempt to improve cash flow. So far this year, Barrick has reduced capital costs by $2 billion, offsetting the majority of declines in metals prices. Barrick has also slashed its corporate staff headcount by 30%.

Newmont has been forced to cut costs after the company was thrown into a second quarter loss, taking a multi-billion dollar writedown on the value of its mines. The company retaliated by slashing its most expensive part of production, the work force. Newmont has been rapidly cutting jobs related to its Australian operations, historically a region where wages are rising rapidly. The company has cut nearly 100 jobs in Australia so far this year and is firing a third of its workforce in Colorado. Moreover, the company has cut its year-on-year capex spending by 29%.

Goldcorp has implemented a companywide spending review and intends to cut 7% of its $2.8 billion capital expenditure budget for 2013. The company is also cutting 10% of its admin expenses, and exploration spending is taking a haircut of 11%. Bear in mind that Goldcorp's management stated earlier this year, "we're not going to take knee-jerk reactions to a short term price move," indicating that the company has become more cautious about the industry's outlook.

So, is Wall Street positive about these numbers?

Wall Street is not positive about these numbers; the majority of the time, EPS estimates have been downgraded since the cuts were announced, and estimates for the next few years have been depressed further, so the outlook is not pretty.

Foolish summary
Mining for gold is no longer the cash cow it was. Rising costs and the falling price of gold are crushing profits, and these three miners are having to act drastically to remain profitable and competitive.

Unfortunately, it does not look as if costs will start to fall any time soon, so cutting expensive capex programs and high-cost mines appears to be the only way forward.