Please ensure Javascript is enabled for purposes of website accessibility
Log In Help Join The Motley Fool
Free Article Join Over 1 Million Premium Members And Get More In-Depth Stock Guidance and Research
By Rich Smith - Updated May 24, 2019 at 1:57PM

The kamikaze Switchblade drone could be a game-changer for AeroVironment.

Some people call AeroVironment's (AVAV 3.52%) Switchblade drone a "Lethal Miniature Aerial Munitions System," or LMAMS. Others call Switchblade an "agile munitions system" or even "the first smart loitering weapon." But whatever you want to call it, the U.S. military sure does like the Switchblade -- a lot.

Contracts galore
AeroVironment describes Switchblade as a "back-packable, non-line-of-sight precision strike solution with minimal collateral effects." Two feet long and six pounds light, battery-powered, GPS-guided, and remotely piloted, Switchblade can be launched by a soldier in the field, used to identify targets through video streamed by its onboard camera -- and then dive-bomb those targets kamikaze-style, detonating its small onboard warhead. 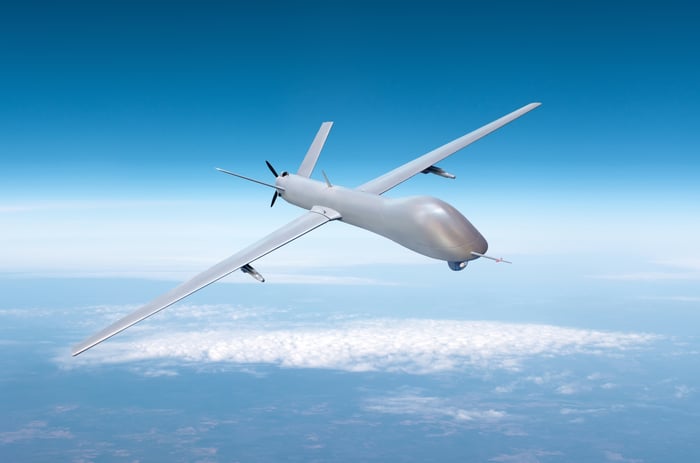 When AeroVironment announced that it had just received a $15.8 million order for its groundbreaking kamikaze drone last month, the military contractor implied that this contract -- sizable as it was for a company of AV's size -- might be only the beginning.

AV wasn't whistling Dixie. Col. Pete Newell, director of the U.S. Army's Rapid Equipping Force was quoted earlier this year saying that soldiers on the ground in Afghanistan "need dramatically more" Switchblades. And just one week after AV announced its $15.8 million Switchblade contract, the Pentagon confirmed that it had already placed a second order for $6.6 million more -- then, a day later, placed another order that was bigger than the first two contracts combined: $29 million.

There's more where that came from
If you're keeping track at home, that makes $51.4 million in Switchblade orders announced in just the past nine days -- nearly 23% of the revenues that AeroVironment collects in a year. All of this is from a new product that AV has barely begun building -- and that's only the beginning of the good news.

"Consumable" ordnance like Switchblade is hardly a new concept among military contractors -- but it is a profitable one. Every time ATK (NYSE: ATK) sells the Army a bullet, and the Army fires that bullet, ATK can expect the Army will be ordering a replacement bullet at some time in the future. (Incidentally, ATK also makes the warhead for the Switchblade.)

Similarly, and on a much grander revenue scale, every time Raytheon (RTN) sells the Air Force a rocket, and that rocket gets launched from a Lockheed Martin (LMT 1.17%) F-35 fighter jet -- same story. The military contractor gets to lather, rinse, repeat -- and cash another check to pay for the replacement weapon.

That's a very nice business model compared with, say, that run by Lockheed Martin itself, which, once it sells the Air Force an F-35, may have to wait decades for the thing to wear out or become obsolete, so LockMart can sell the Air Force a new one.

Foolish takeaway
Historically, military contractor AeroVironment has more resembled Lockheed Martin than it has Raytheon -- selling the Pentagon drones that, although they may occasionally break down, become obsolete, or crash, generally are intended to be reusable. The Switchblade, in contrast, is a "kamikaze" drone. Its purpose in life is to find a target upon which to blow itself up.

At which point ... lather, rinse, repeat -- and AeroVironment gets to cash another paycheck.