We at The Motley Fool are long-term, fundamental investors. Unfortunately, this appears to be a minority view in the capital markets. As such, when I come across a professional investor who has something clever to say along these lines, I thinks it's worth highlighting. This week's Barron's interview with Daniel Peris of Federated Investors, titled "Time to Wake Up and Start Paying Dividends," falls in that category (a sign-up may be required).

Peris, who co-manages the Federated Strategic Value Dividend fund and has written two books on dividend investing, came to money management via a detour in academia -- he holds a Ph.D. in Soviet history. However, the lack of a finance degree hasn't stopped him from securing a proper understanding of stocks and investing (OK, he is a CFA charterholder):

We view our task as investing in businesses, not stocks. ... Our fundamental premise is that these are businesses, and we are taking a stake in them. And, oh, by the way, they just happen to be publicly traded. And, yes, it's fine that these businesses reprice every day in the stock market. But the fact that our holdings are publicly traded is, for us, a matter of convenience. It is not the goal, fundamentally, to buy low, sell high, and repeat frequently. For us, the goal is to be a business owner.

A kindred spirit! Billionaire investor Warren Buffett wouldn't have put it any differently. So how do dividends fit into that picture?

If you are going to be a minority owner of a publicly traded business, your compensation for putting up that capital, and for becoming a business owner, is in the form of the dividend. So we look at the dividend and the dividend's growth.

In fact, dividends are a vital component of value and, consequently, stock returns:

In its most simplified form, only a few key numbers are important, and it turns out that the dividend yield is really what drives the overall equation. Also part of that equation: What is the growth of the cash stream, and what is the discount rate? This could be in regard to an apartment building, an oil well, a chain of dry cleaners, or a publicly traded company. What's the cash stream versus the purchase price and/or the yield? So we try to quantify that.

The trouble is, when Peris applies that logic to the broad market, the numbers don't add up:

The problem with the S&P 500 (SNPINDEX:^GSPC)  -- that is, the major part of the U.S. stock market, large publicly traded corporations -- is that if you are going to be honest and put in a 5% or 6% dividend-growth rate, but you have only a 2% yield, you have to use an abnormally low discount rate in order to have a present value that is positive. Or you can use a normal discount rate. But then you have to use an abnormally high growth rate. The Gordon Growth Model [which values a stock based on a series of future cash flows that are discounted] is a gross simplification with flaws. But it's a good rule of thumb. And it makes you think about being realistic and whether you are understating risk or whether you are overstating your expectations for what these large corporations are going to be doing.

In other words, at a 2% dividend yield, the broad market is overvalued and the prospects for long-term stock returns are, thus, uninspiring. One way in which U.S. companies could alter the dynamics of that equation is to reduce share buybacks in favor of higher dividend payouts. Indeed, the following graph shows that the S&P 500's trailing-12-month dividend payout ratio, which tracks the proportion of earnings paid out to shareholders via dividends, is very low by historical standards: 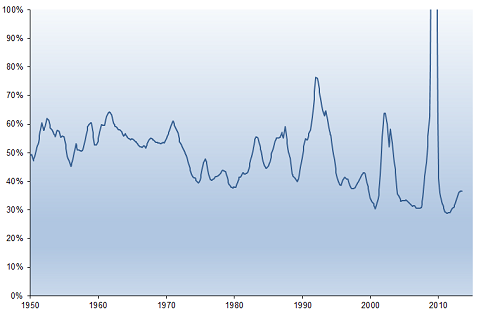 Source: Author's calculations based on data from Robert Shiller.

With a higher dividend yield, the numbers stack up a lot more favorably -- or, as Peris puts it: "[O]ur portfolios have a gross yield of 4.5% to 5%. With that kind of a yield, I can make that present-value calculation work a lot more easily than I can when the starting yield is 2%."

According to Barron's, Peris is reluctant to discuss individual stocks, but the top three holdings in his fund, as of July 31, were Dow Jones (DJINDICES:^DJI) component AT&T, ConocoPhillips, and Kraft Foods.