Like other income producing investments, MLPs exhibit strong sensitivity to interest rates. Over time, interest rate variations have exhibited influences on MLPs. Fortunately for MLP investors, the interest rate environment for most of the last decade and a half provided a tailwind for units. A progressively falling rate environment helped drive prices up on these securities in a yield-starved environment. Those times are changing and reassessing your MLP's growth potential becomes even more important in that context.

There are a set of elite midstream MLPs that clearly outperformed peers over the years. These are partnerships that have succeeded in avoiding operational issues over time. Their steady execution gives them bond-like performance.

These Steady-Eddies include names like Kinder Morgan Energy Partners (NYSE: KMP), Plains All American Pipeline (NYSE: PAA), Enterprise Products Partners (NYSE: EPD) and Magellan Midstream Partners (NYSE: MMP). Over the years, they've performed admirably, but they haven't been immune to contractions. In fact, the group as a whole tracked the 10-yr Treasury notes at a 2% spread for much of their history; both up and down. Part of their remarkable success is attributable to the fact that they haven't had to cope with an upward rate trajectory for any sustained period of time. With rates at historic lows, that will likely change for the worse.

It's all about risk.
The reason is simple when viewed in the extreme. If the 10-yr were to push through 6%, would investors in Jimmy's Used Car Park be willing to accept 6% when Uncle Sam's offering 6%? No. His bonds require higher yields to attract investors. Jimmy's junk would trade down in the secondary market until its yield was sufficiently high to warrant its higher risk. Existing bondholders would be left holding the bag.

It's not really any different in intermediate cases. As Treasury rates rise, income producing securities of all types fall, repositioning yields in relation to Treasuries.

It's not just corrections that can erode your MLP returns.
Once the market warmed to the new MLP products, the top MLPs moved in step with Treasuries. You can see below that the yield of each of the four correlates pretty well to Treasury yields over the years. Spreads sat around 2% for most of the period after the dot.com bubble. Only the serious corrections of 2002 and 2009 broke the pattern. 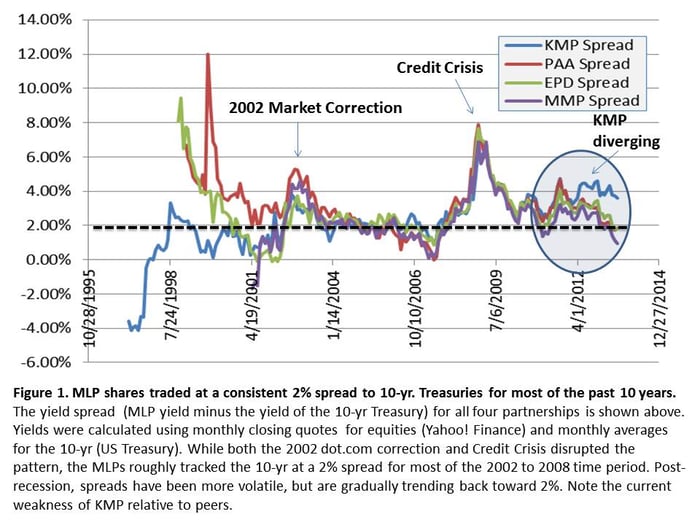 Naturally, all bets are off when panic arises. The flight to safety during the dot.com crash rallied Treasuries, dropping interest rates as economic uncertainty rose. Stock prices waned and the yield on Kinder Morgan's units rose as they lost 25% of their value. Losses were worse in the 2008-2009 Credit Crisis as Kinder Morgan Partners units shed 31%of their value. As with any equity, corrections can be costly.

While losses during corrections are understandable, losses during good times are harder to swallow. Twice between 2002 and 2008, Kinder Morgan Partners units came under pressure even as the wider market rallied. Both periods corresponded to relatively brief periods of rising interest rates.

To be fair, all of this occurred during a decade of otherwise excellent performance. Holders through the 'Naughts' were well rewarded for their patience. Unfortunately, MLPs have never been tested by a sustained period of rising rates. Their performance in that scenario is uncertain.

Some pain is already evident. The last year hasn't been particularly unkind and despite their track record, both Kinder Morgan Partners and Enterprise Products Partners have recovered less well from the recession than their smaller and more nimble peers (see Figure 2). Sharp-eyed readers will have already noted that Kinder Morgan Partners' spread hasn't recovered to its 2% norm post-recession (see Figure 1). That's worrisome as rates rise. 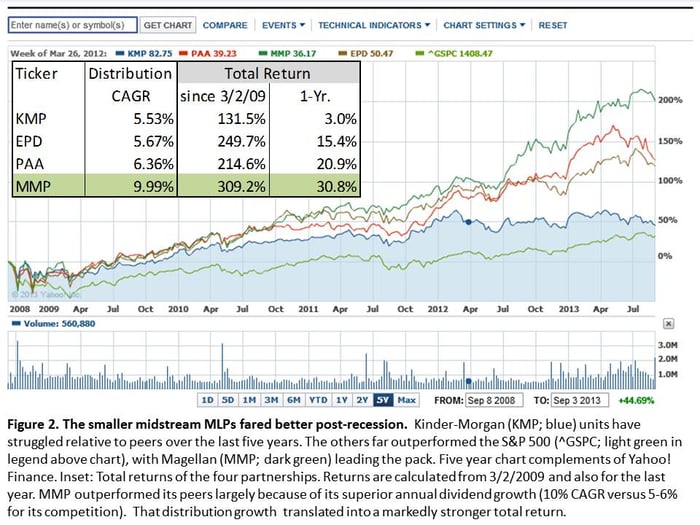 Everyone put money to work during the Credit Crisis, taking advantage of cheap capital. Plains raised close to $2 billion in fresh capital. Magellan rounded up a little over $1 billion. Enterprise Products swallowed TEPPCO and Duncan Energy, and Kinder Morgan put billions to work.

It's not just the size of the meal, though. It's the size of the dog. While Kinder Morgan put far more capital to work than comparatively tiny
Magellan, Magellan's infusion was almost half its 2008 asset base . By contrast, the $3 billion raised by Kinder Morgan Partners was a drop in an $18 billion bucket. Coming off its smaller base, Magellan boosted capacity 50% from 2009 to 2012. Those timely investments are what drove Magellan's segment leading growth, amplifying total returns.

Find growth to protect your capital.
MLPs have never faced a period of sustained rising interest rates. They simply haven't existed long enough to see one. With rates as low as they've been, they'll eventually face that headwind. These are uncharted waters, and the few short rate-rising storms they've encountered suggest that a big storm will not be without consequences. Look to the MLPs with strong growth potential to protect your hard-earned capital from rate-driven losses.

Peter Horn has no position in any stocks mentioned. The Motley Fool recommends Enterprise Products Partners L.P. and Magellan Midstream Partners, L.P.. Try any of our Foolish newsletter services free for 30 days. We Fools may not all hold the same opinions, but we all believe that considering a diverse range of insights makes us better investors. The Motley Fool has a disclosure policy.