After Microsoft (NASDAQ:MSFT) inked a partnership with Nokia (NYSE:NOK) in February 2011 many began to speculate that Microsoft would eventually acquire Nokia. On September 2 news broke that this had essentially taken place, with Microsoft paying about $7 billion for both Nokia's devices and services business and a license to use the company's trove of patents.

This is a big development for Microsoft, which is in the middle of a transition into a devices and services company. Microsoft launched its own tablets, the Surface and Surface RT, earlier this year, and with the acquisition of Nokia's phone business Microsoft is taking a huge step forward toward its goal.

What the acquisition means for Microsoft
Windows Phone has become the number three smartphone OS in the world, recently surpassing BlackBerry, and in certain regions they growing market share fast. In the UK market share more than doubled from 4.2% in 2012 to 9.2% today. In France market share has risen even faster, from 3.6% to 11%. In Latin America Windows Phone is now the second most popular mobile platform behind Android.

In the U.S., however, market share remains low. Rising from 3% last year to 3.5% today, Windows Phone has yet to make serious penetration into the domestic market.

Nokia makes up about 80% of the Windows Phone market, with other OEMs largely focused on Android. Nokia has been growing its quarterly phone shipments at a rapid pace, and in the most recent quarter Nokia shipped over 7 million Windows Phone devices. 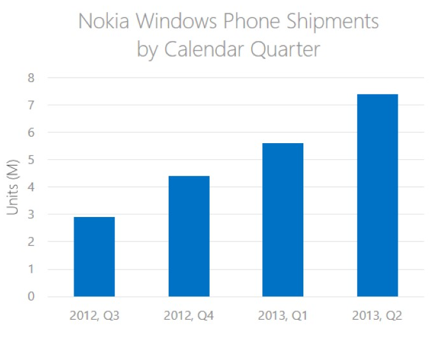 Since Nokia's phone unit is currently unprofitable Microsoft will absorb those losses. The company expects GAAP EPS to be reduced by $0.12 in the current fiscal year, but by fiscal 2016 growth combined with an expected $600 million in cost synergies should lead to the transaction being accretive to the EPS.

This is the sort of acquisition which is part of a long-term plan, and with the market more often focused on the short-term shares of Microsoft fell by as much as much as 6% on the day following the announcement. Microsoft's market capitalization was reduced by about twice the amount of cash Microsoft spent on Nokia, with the market apparently assigning a negative value to Nokia's phone operations.

This deal will allow Microsoft to react more quickly to the changing mobile market, with software, hardware, and marketing all under one roof. In the announcement slide show Microsoft lays out two long-term scenarios: 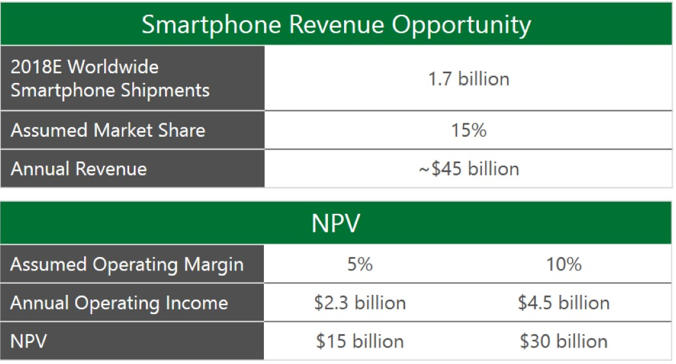 Compared to the size of Microsoft a few billion dollars per year in operating income means little, but compared to the price paid for Nokia it's clear that if even the low-end scenario plays out Microsoft got a real bargain. It all comes down to execution on Microsoft's part, and with a history of failed acquisitions there's certainly no guarantee of success.

One of the most compelling positives regarding the acquisition is better unit economics. Under the previous partnership Microsoft was realizing a gross profit of less than $10 per unit. With the acquisition this number is expected to rise above $40 per unit, greatly increasing profitability per unit sold. Microsoft estimates that operating income will break even with costs when units exceed about 50 million annually, and with a current annual run-rate of nearly 30 million this point could be only 1-2 years away.

Microsoft needs as many Windows devices in peoples' hands as possible, and the Nokia deal is a step forward for the company. If Microsoft can continue to grow unit volume and take market share then Windows Phone will eventually become the number two phone OS worldwide.

What the acquisition means for Nokia
Without the same resources as Microsoft, Nokia would have had trouble absorbing continued losses from the phone division. The feature phone business, also going to Microsoft, has been declining for years, and Windows Phone volume hasn't made up for the declines.

It's becoming more difficult to be an independent phone maker, with the playing field largely leveled by common operating systems. Makers of Android phones face a constantly shifting market, with Motorola, HTC, and now Samsung all enjoying periods of success. Windows differentiated Nokia from the rest, but there was no real reason to believe that Nokia had any long term advantages.

After the sale is completed Nokia can focus on its three other businesses: wireless infrastructure, a location cloud platform, and technology and patents. The company will also have plenty of cash, allowing it to invest in its businesses.

Both the wireless infrastructure business and the location platform have positive operating margins, and the removal of the phone business should lead to a profitable Nokia after years of losses.

The bottom line
I think that this deal is not a bad one for Microsoft. The company gets to use a small part of its overseas cash hoard to seriously push Windows Phones, and the short-term hit on earnings isn't very significant. If Microsoft can pull this off and make Windows Phones popular in the U.S. then $7 billion will look like a steal.

For Nokia, shedding an unprofitable division which was dragging down the company is a good idea. Prospering as an independent phone maker would have been difficult, and Nokia shareholders should be thrilled with the deal.