If you’re looking to play consumer trends, then this is the investment for you. However, this company’s kryptonite presents one significant danger.

You can play the health-conscious consumer in many different ways, one of them being Whole Foods Market (WFM). Whole Foods primarily sells natural and organic foods, which are in high demand. But one factor that makes Whole Foods so appealing to investors is also its biggest weakness.

Quality results and high expectations
Sales popped 12.1% to $3.1 billion in the third quarter. You might be wondering how many new stores were opened to assist that number, but it was only four. And comps screamed higher by 7.5%. Comps are one of the most important numbers for any company selling goods in a retail space since the calculation eliminates results from new store openings thereby distinguishing between sales growth from the additional stores and growth from improved operations at existing locations. Basically, new store results can make top-line growth misleading.

Whole Foods is seeing impressive numbers because consumers want to eat and feel healthier. Whole Foods defines natural foods as minimally processed and with limited-to-no artificial ingredients or unnecessary chemicals. It defines organic foods as being grown via renewable resources and aiding the conservation of water and soil.

So, Whole Foods accomplishes two goals here. One, if you shop at its stores, you're going to eat food that's better for you, and you might feel better and live longer. Two, the company's practices are "green," or good for the environment.

Currently, Whole Foods has 351 stores throughout the United States, Canada, and the U.K. Whole Foods wants to accelerate its store openings, which would increase its market share. Currently, the company produces enough cash flow for 94 new store openings, and it ultimately desires 1,000 stores. Considering Whole Foods' expectations for the next two years, these goals seem reasonable. Take a look at FY 2013 and FY 2014 estimates.

Whole Foods will increase its value offerings and promotional activity to help accomplish its current goals.

Greatest strength and biggest weakness
Thanks to its strong brand and locations in high-income areas, Whole Foods is able to charge premium prices for its products. This, of course, helps the top line. But this also presents a danger.

If the economy isn't as strong as advertised and the consumer weakens, then Whole Foods isn't likely to perform as well. I know what you might be thinking, which is that the high-end consumer is doing well and isn't as susceptible to a weak economy. However, this is a misconception based on the current economic environment.

High-end consumers actually have the most downside risk at the moment simply because in many cases, a large portion of their net worth is tied to the stock market and real estate market. If and when interest rates increase, stocks and real estate markets aren't likely to perform as well as they have recently. Actually, based on all of the liquidity being pumped into the system since 2009, the downside risk could be high.

The point here is that high-end consumers will either react in one of two ways. One, they will shop somewhere else. Two, and a more likely scenario, is that they will continue to shop at Whole Foods, but they will reduce their spending. Either way, it's a negative for Whole Foods.

All that said, the stock market has a mind of its own, which is sometimes overcome by greed and fear. Therefore, there is no telling how the market will act in the near term to medium term. What we do know is that Whole Foods didn't react well when the market faltered in 2008/2009. Notice its performance at that time compared to peers. 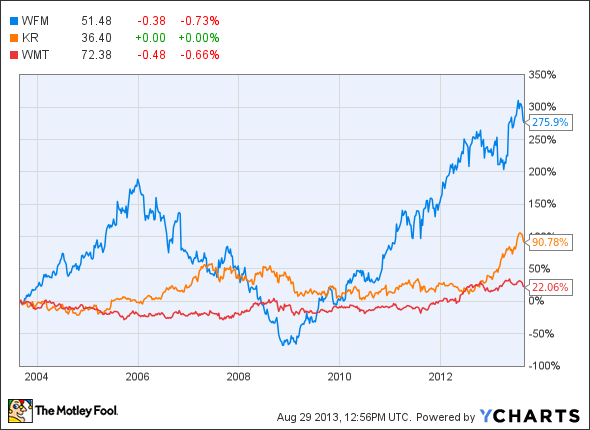 While Whole Foods has greatly outperformed its peers recently, that 2008/2009 time frame is downright scary. Let's see if one of the company's peers might present a safer long-term investment opportunity.

Kroger recently acquired Harris Teeter to accomplish the latter, as the majority of these supermarkets are located in high-end areas. Not only that, but these are areas where Kroger doesn't yet have exposure. Kroger is currently trading at 12 times earnings, making it cheap compared to peers.

Then there's Wal-Mart Stores (WMT 1.97%). Wal-Mart might be the most hated company in existence on Main Street, but if you polled investors, they probably wouldn't hate it so much. Wal-Mart is a much larger company, with a market cap of $238.5 billion. It's also much different than Whole Foods in regards to pricing, with a focus on the value-conscious consumer.

Conclusion
Based on the chart above and valuations, Kroger and Wal-Mart are much safer investments. However, this is a tricky situation. At the moment, the fact that Whole Foods is trading at 36 times earnings is justifiable. Strong upside potential exists since the company's investments are still paying off and the high-end consumer remains healthy. But given my inclination towards capital preservation, I have to pass on investing in Whole Foods at this point. In my eyes, external economic circumstances present too many downside risks.