Investors love stocks that consistently beat the Street without getting ahead of their fundamentals and risking a meltdown. The best stocks offer sustainable market-beating gains, with robust and improving financial metrics that support strong price growth. Does Dow Chemical (NYSE:DOW) fit the bill? Let's take a look at what its recent results tell us about its potential for future gains.

What we're looking for
The graphs you're about to see tell Dow Chemical's story, and we'll be grading the quality of that story in several ways:

What the numbers tell you
Now, let's take a look at Dow Chemical's key statistics: 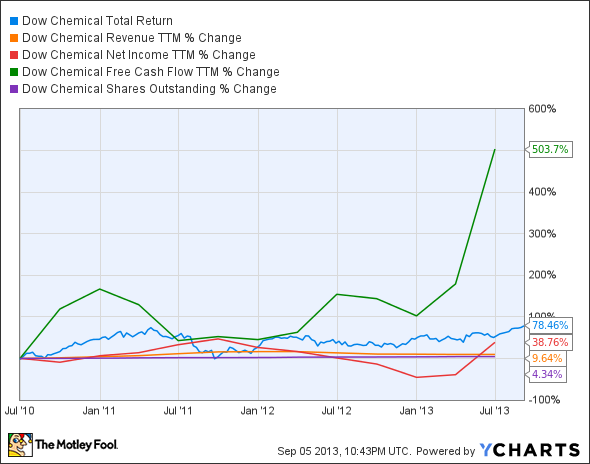 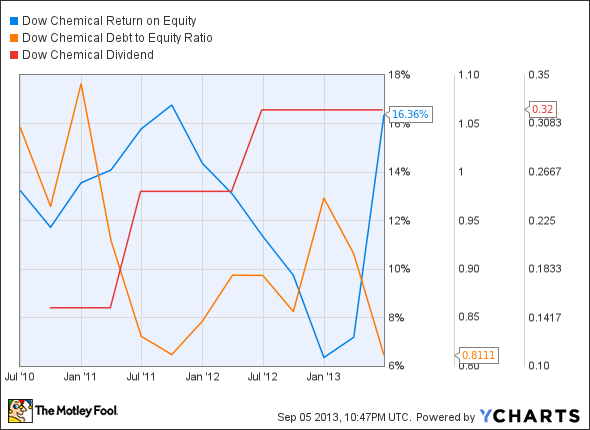 How we got here and where we're going
Dow Chemical put together a really strong performance, earning seven out of nine passing grades, but missing an eighth due to sluggish revenue growth over the past three years. Dow's shareholders have enjoyed solid growth over the past few years, but its share price has outpaced the growth of its bottom line lately. All in all, Dow looks quite solid, but can the company keep up its progress? Let's dig a little deeper to find out.

Fool contributor John Miller notes that Dow produces about 20% of the world's ethylene oxide, and over the past few years, demand for ethylene oxide has grown 5% to 6% every year, and that could increase further if and when emerging markets shake off their doldrums. Dow has also been looking to generate more revenue from its agricultural segment -- in the first quarter, Dow's Agricultural Sciences division reported a 14% growth in revenues. The company is shifting away from several legacy chemicals businesses in the meanwhile, and has divested weaker lines for a total of $8 billion over the past few quarters. My fellow Fool Dan Caplinger notes that Dow has been trying to keep the recent flood of natural gas produced in the United States in the United States, as this input is much lower-priced domestically than it is in much of the rest of the world. If this edge evaporates, Dow may wind up trimming down its product lines even further.

Dow's rival DuPont (NYSE:DD) also has plans to move away from the chemicals industry, and now intends to divest its Performance Chemicals division to realign its focus on more profitable businesses, particularly Agriculture and Nutrition. DuPont's Agricultural segment grew 7% in its most recent quarter, and now contributes 37% of the company's total revenues.

Dow's electronics and communication business, which develops materials for smart devices, saw a rather underwhelming year-over-year growth of just 2%, but DuPont's equivalent division reported a 9% drop in sales in the latest quarter. Fool contributor Neha Chamaria points out that 95% of smart devices in the market employ Dow's innovations, which should help the company maintain its grip on what appears to be a business approaching or at a near-term cyclical peak. On the other hand, Dow and Corning's (NYSE:GLW) joint venture Dow Corning has been weighed down by oversupply, which is likely to crimp any near-term profit distributions to both companies.

Putting the pieces together
Today, Dow Chemical has many of the qualities that make up a great stock, but no stock is truly perfect. Digging deeper can help you uncover the answers you need to make a great buy -- or to stay away from a stock that's going nowhere.