Please ensure Javascript is enabled for purposes of website accessibility
Log In Help Join The Motley Fool
Free Article Join Over 1 Million Premium Members And Get More In-Depth Stock Guidance and Research
By John Miller – Aug 24, 2013 at 12:00AM

Commodity demand of silver is increasingly important to its price.

Science describes light as both a wave and a particle. A similar, somewhat contradictory duality exists with silver; it behaves as both a precious metal currency and a commodity. As a precious metal silver provides a hedge against inflation and economic stress. Silver price also correlates to gold, the money supply, and consumer prices, and it is inversely correlated to the dollar and U.S. Treasuries. However, as the industrial uses of silver expand, the commodity demand of silver becomes increasingly important in understanding its pricing.

Industrial Applications
As noted in the chart below, silver's use in industrial applications is both the largest fabrication segment and has the highest absolute growth. These applications include silver use in electronics, photovoltaics, and ethylene oxide production. Silver is desirable in electronic applications because it has a high conductivity, both thermal and electrical. Silver is also growing in solder applications albeit more slowly than in electronics. As with electronics, base metals are replacing silver as a percentage in solder materials, but economic expansion in China and India again outweighs the substitution effect.

Photovoltaics and the ethylene oxide segments are growing rapidly and challenging solder applications for second among the industrial application segments. While the silver in each photovoltaic application will decrease as solar cell technology improves, total silver usage will rise as alternative energy sees broader adoption. However, in the short term silver demand from solar energy companies may decrease due to their current high solar cell inventories.

Ethylene oxide is used to produce detergents, plastics and polyester. Union Carbide, now a division of Dow Chemical Company, developed the use of silver as a catalyst in the oxidation of ethylene. Using their proprietary method Dow now produces 20% of the world's ethylene oxide. The ethylene oxide market is growing 5-6% per year with Asian demand leading growth. 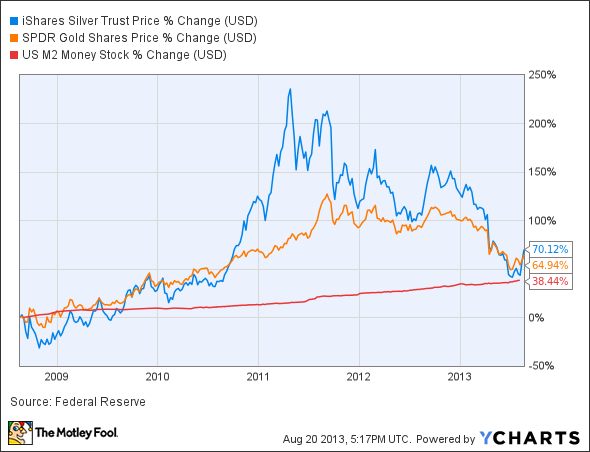 Summary
The price of silver is increasingly driven by both its precious metal and commodity properties. As a commodity it is valued for uses in electronics and soldering. It is used more and more in the solar energy industry and as a chemical catalyst. The most popular way to directly and inexpensively capture silver prices without becoming a silver stacker is through the iShares Silver Trust (SLV 0.26%). The iShares Silver Trust also offers an interesting alternative to gold ETFs like the fashionable SPDR Gold Shares (GLD -0.11%). Silver's duality fills the need for precious metals as a hedge against uncertainty and inflation but also provides exposure to increasing world economic prosperity through its industrial uses.

John Miller has no position in any stocks mentioned. The Motley Fool has no position in any of the stocks mentioned. Try any of our Foolish newsletter services free for 30 days. We Fools may not all hold the same opinions, but we all believe that considering a diverse range of insights makes us better investors. The Motley Fool has a disclosure policy.