The price of crude oil has spiked on the back of growing geopolitical tensions in the Middle East. As a result oil stocks are bouncing back into favor with investors. One of the hottest potential plays for investors is ConocoPhillips (COP 3.44%), which in 2010 embarked on an aggressive strategy to divest itself of non-core and high-risk assets, in order to focus on higher-margin, lower-risk operations. This has transformed it from a lumbering integrated oil major to a lean independent oil explorer and producer.

Instability in the Middle East drives crude prices higher
It was only six months ago that the outlook for crude oil was pessimistic on fears of oversupply and diminishing global demand for energy. But by late August, the price of crude had jumped to an 18-month high as a result of supply disruption, growing geopolitical instability in the Middle East, and fears of U.S. intervention in the region.

Barclays' oil analysts recently released a note to clients where they spoke of growing concerns about the stability of the world's key oil-producing region. This was on the back of the increasing likelihood of U.S. intervention in Syria, which has the capability to further destabilize the Middle East.

Any threat of U.S. military intervention and growing geopolitical instability will exert upward pressure on oil prices. Already the price of light sweet crude futures for delivery in October are over $107 per barrel, and it appears that the price of crude will continue to climb over the short-term.

ConocoPhillips outperforms its larger peers
Despite softer crude prices and declining margins affecting the financial performance of the majority of oil majors, ConocoPhillips delivered some strong second-quarter 2013 results. The company's bottom line grew by 17% year over year with adjusted earnings of $1.8 billion. This can primarily be attributed to cost reductions and production volumes exceeding expectations.

With growing violence and political tensions in the Middle East, an impressive result of Conoco Phillip's transformation strategy has been its ability to increase production in lower-risk and stable jurisdictions such as North America. This is particularly important, because with an increasing share of its production being located in politically stable countries, ConocoPhillips (unlike its peers that have operations in unstable jurisdictions) is less susceptible to production outages.

While ConocoPhillips second quarter results were impressive, the same can't be said for its larger peers Chevron (CVX 1.64%) and ExxonMobil (XOM 1.98%). Both reported that their bottom lines had declined, down by 26% and 57%, respectively.  Both companies attributed this decline to softer crude prices and lower margins . This decline for both companies can be attributed to declining production and shrinking downstream margins.

But Anadarko Petroleum (APC) – one of the world's largest independent oil explorers and producers – like ConocoPhillips bucked the trend. It reported nine-fold year-over-year growth in its net earnings. This was on the back of a significant increase in production and lower-than-expected costs.

Unlocking shareholder value
The key catalyst that will continue to unlock shareholder value for investors in ConocoPhillips is its strategy to divest itself of non-core, high-risk and lower-margin assets. The company is seeking to pocket between $8 billion and $10 billion through these asset sales. Already ConocoPhillips has sold its Clyden oil sands project in Alberta, Canada to Exxon as well as selling assets in the higher risk locations of Nigeria, Kazakhstan and the Caribbean.

The proceeds of these sales will provide critical low-cost capital to fund ConocoPhillips' exploration program and the development of core, high-margin projects illustrated in the maps below. 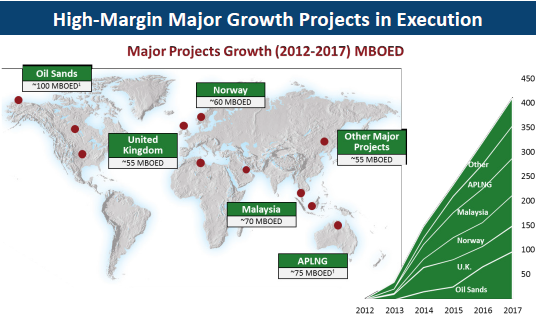 As these projects come online ConocoPhillips will see a significant boost to both its oil reserves and production, creating additional value for shareholders.

They are also well below what is considered fair value for similar size oil explorers and producers. ConocoPhillips also pays one of the best dividend yields among its peers with a quarterly dividend of $0.69 per share, giving it a yield of 4%.

Foolish final thoughts
ConocoPhillips appears undervalued by the market. With its non-core asset divestment strategy in full swing along with a renewed focus on high-margin development, it is set to unlock further value for shareholders. Furthermore, with a solid dividend yield, patient long-term investors will continue to be rewarded for their patience as this strategy gains traction.