Please ensure Javascript is enabled for purposes of website accessibility
Log In Help Join The Motley Fool
Free Article Join Over 1 Million Premium Members And Get More In-Depth Stock Guidance and Research
By Leo Sun - Sep 11, 2013 at 9:25AM

What exciting new innovations in healthcare will the new incubator and idea lab, Glassomics, yield for the healthcare industry?

At the end of July, Palomar Health announced a partnership with Qualcomm Life (a subsidiary of Qualcomm (QCOM 1.45%)) to launch Glassomics, an incubator and innovation lab aimed at exploring the applications of wearable technology in health care.

Let's take a look at how these technologies could revolutionize health care in the future and which companies are fueling their growth.

Wearable devices and augmented reality
Google Glass is the obvious centerpiece of Glassomics. So far, Glass has been used to stream live operations for educational and record-keeping purposes. However, there are several companies, such as Augmedix, which are developing a new generation of augmented reality Google Glass apps that promise to turn the device into a full-fledged next generation medical tool.

Augmented reality is an extra layer of cloud-based data that is projected over a real-time image. For example, Google Glass users can view information regarding traffic, weather, and business information, which "augment" a user's view of reality.

I explored the idea of Google getting back into health care with Glass in a previous article, and it remains a lucrative business for many app developers.

Medical device connectivity
The connectivity between medical devices and cloud-based software over wireless connections is a major area Glassomics is concentrating on. Qualcomm -- one of the world's largest manufacturers of 3G, 4G, and next-generation wireless chips -- considers this area a high growth one as an increasing number of wireless devices connect remotely with apps.

Medtronic (MDT -0.04%), for example, connects its cardiac devices to its remote care network, CareLink. The collected data can be transferred to electronic health records, or EHRs, or used for health alerts in case potential issues are detected. Medtronic expanded its telehealth and remote care portfolio with its acquisition of Cardiocom last month, indicating that it realizes that the future of medical devices will depend heavily on remote monitoring services. 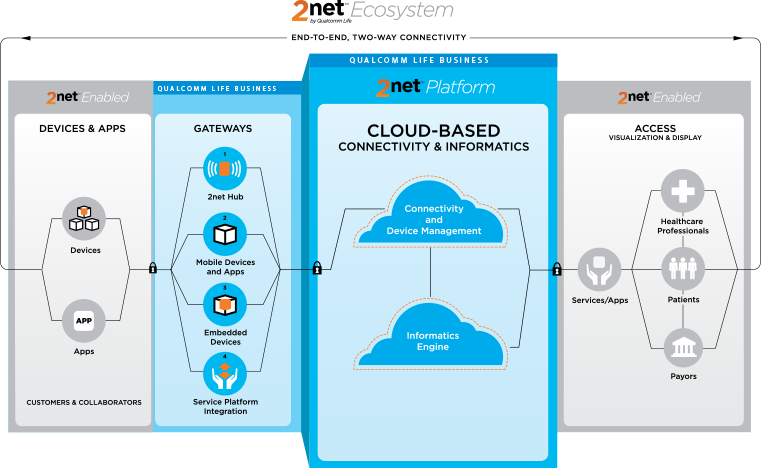 The 2net Platform is designed to capture biometric data from mobile devices, apps, and embedded devices; send them to be stored in the cloud; and be retrieved by other services used by consumers and health care professionals.

Instead of merely inputting symptoms on the website, a health monitoring device could send the readings over the cloud directly to WebMD, which could intelligently analyze the data. This would increase the accuracy and usefulness of WebMD's site, the largest health portal in the United States, making it a much more reliable research tool for patients and physicians.

The Internet of everything needs a universal language
To promote better connectivity between devices and software, Glassomics is promoting the use of AllJoyn, an open source peer-to-peer networking project aimed at creating a universal software framework that will allow "smart" products to operate together across different hardware and software platforms.

In addition to universal connectivity, SparseWare's Sage, also featured at Glassomics, is an evolution of the "write once run anywhere" mantra championed by Java software developers in the past. Sage allows programmers to create cross-platform web-enabled desktop applications and applets, rendered in real time.

Together, new technologies like 2net, AllJoyn, and Sage are aiming to create a universal language that will make it much easier for the health care tech industry to develop more efficient, cross-compatible apps.

While most investors are focused on the near-term growth of these companies by looking at the consumer market for smartphones and tablets, the real future could be far more significant for mankind -- a future where not only our mobile devices, but our bodies, are connected to the Internet and monitored in real time.

Leo Sun has no position in any stocks mentioned. The Motley Fool recommends Google. The Motley Fool owns shares of Google, Medtronic, and Qualcomm. Try any of our Foolish newsletter services free for 30 days. We Fools may not all hold the same opinions, but we all believe that considering a diverse range of insights makes us better investors. The Motley Fool has a disclosure policy.