Retail sales in July grew by just 0.2%. That's a little bit slower than the 0.5% economists had expected, and the 0.4% growth we saw in June.

Slow income growth, a tough job market, and the expiration of stimulus measures like the payroll tax cut have been biting into customers' spending power. Consumer confidence also declined in September.

But it's important to keep individual monthly reports in perspective. The monthly retail sales report has a margin of error of 0.5%, an amount almost double the surprise.

What's more, retail sales growth does tend to flop around at least once a year, so some variability in the rate of growth is nothing new, even if it does eventually represent the start of another short-term hiccup along the longer-term recovery: 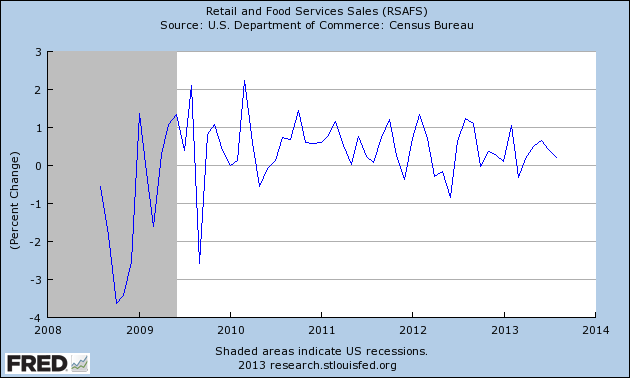 Unless we start to really see several months of poor reports, the bigger picture is that retail sales have been growing at a pretty healthy clip, despite the fact that it's not making up the lost ground from the financial crisis as fast as we might like: 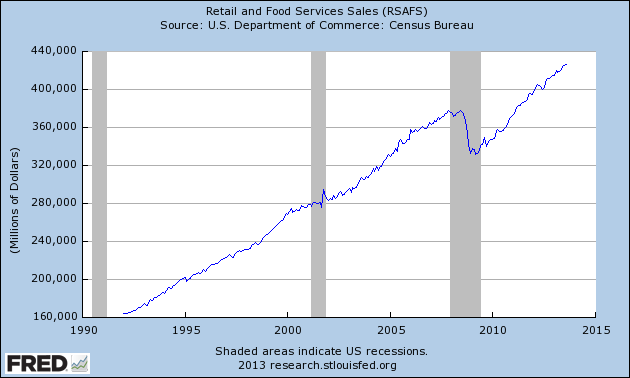 About half of the growth this month came from auto sales, which have been one of the brighter spots in the recovery, and rose 13.3% over last July. In August, Ford (NYSE:F) reported its best sales month in seven years, and plans to boost fourth-quarter production, while General Motors (NYSE:GM) also saw excellent sales growth. Cars on the road are at a record high age, and there's still a lot of pent-up demand left for customers to fill.

Department stores have been faring the worst of any category, showing a nearly 5% sales decline so far in 2013.