Please ensure Javascript is enabled for purposes of website accessibility
Log In Help Join The Motley Fool
Free Article Join Over 1 Million Premium Members And Get More In-Depth Stock Guidance and Research
By Morgan Housel - Sep 13, 2013 at 10:11AM

Big and getting bigger.

The financial crisis forced Americans to act more responsibly. Less debt. More saving. According to Bloomberg, "Consumers in the U.S. are spending more closely in line with their incomes than in any expansion in the past 48 years."

But something interesting happened. McMansions bounced back with a vengeance. The median square footage of a new home is now at an all-time high: 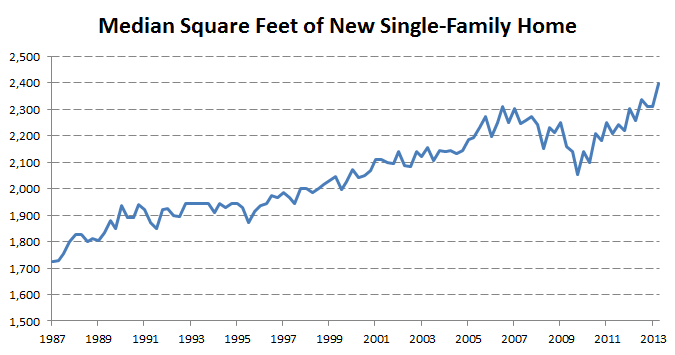 The first-time buyer now has to come up with 20% down payment and a pristine credit score, and that's harder to do. If the [remaining] buyers are trade-up buyers, you're going to end up with larger, more expensive homes.

So, new homes are getting bigger because more new homes are going to older, richer buyers. This is why luxury builders like, say, Toll Brothers (TOL 0.91%) have done reasonably well in the last few years.

But there's more to it than that. Average American homes have been getting bigger and stuffed with more amenities for decades. The rise in average square feet is a continuation of a trend that started long ago.

Take a look. (All of these charts are made with data from the Census Bureau's annual Characteristics of New Housing report). 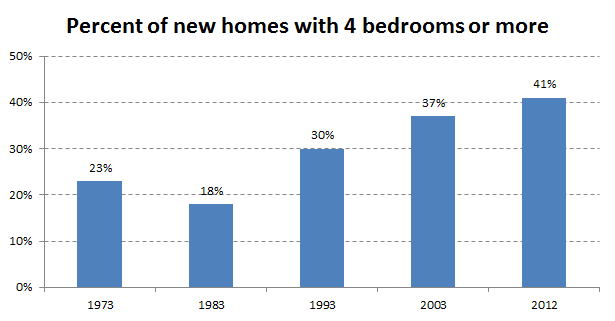 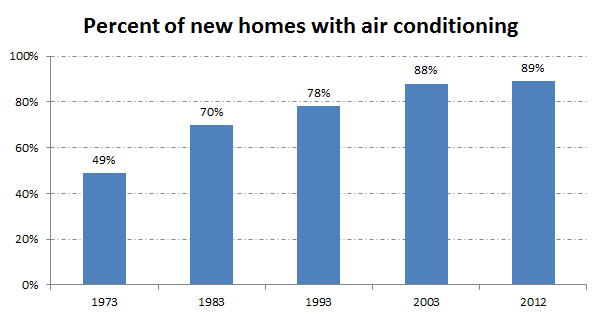 This shouldn't be surprising. In terms of real GDP per capita, the country is 84% richer today than it was in 1973. And homes have been the single biggest show of American wealth for centuries. People get richer and they want a bigger house. It's been like this for centuries, and it won't likely end.

What's interesting is that even though we're living in larger homes, the size of an average household is shrinking. In 1975 the average American household had 2.94 persons. By 2004 that was down to 2.57. Oddly, as recently as 1986, just 12% of new homes had three or more bathrooms. Last year, nearly a third did. Indeed, the average new home now has more bathrooms than occupants. Look how far we've come, grandma!

Yale economist Robert Shiller once explained another thing about evolving homes: They keep a lid on prices:

It's just a manufactured good, and progress is always happening. And on top of that progress, there's the outmoding, the out-of-style factor. So what kind of houses will they be building in 20 years? They may have lots of new amenities. They will be computerized or something in some way that we can't anticipate now. So people won't want these old homes.

How much home do you need to live comfortably? Sound off in the comments section below.