Most of us probably have no idea where Malaysia is located. Even fewer probably know of its natural resource riches. That needs to change because Malaysia should prove to be an important location for oil companies looking for growth. Not to mention its importance to investors looking to profit from that growth.

For those needing a quick geography lesson, Malaysia is located in Southeast Asia and it's actually two separate land masses separated by the South China Sea. Its that geographic location that's important because of its close proximity to oil thirsty China.

Oil producers are enticed by the compelling combination of an excellent resource base that's in close proximity to China. It's a recipe for high margin oil growth, which is the reason why ConocoPhillips (COP 0.06%) is especially drawn to the country. Conoco has a two-fold strategy to deliver returns to its investors. First, it's planning to grow its production by 3%-5% annually through 2017. At the same time its plan is to grow its profit margins by the same 3%-5% annual rate. Investing in Malaysia accomplishes both of those goals, which is detailed on the slide below. 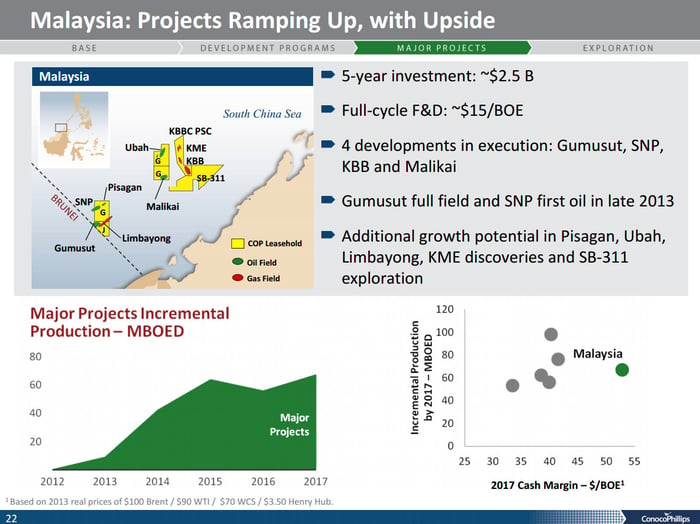 Note the graph in the lower right hand corner. Malaysia's margins are by far the best in Conoco's portfolio of major projects. So, not only does Conoco expect meaningful production growth from its developments in Malaysia, but these will really impact its bottom line.

Conoco is not alone in its pursuit of profits from Malaysia. It has actually partnered with Shell (RDS.A) and Murphy Oil (MUR 0.17%) on a number of the projects it will be bringing online over the next few years. One of the projects, Gumusut, is actually operated by Shell and should really start flowing production by the end of this year as a permanent, semisubmersible floating production and storage vessel is placed into service. What's incredible about this project was that it was first drilled in 2003 and is just now coming online a decade later. It shows just how long it can take to bring an offshore project online.

Another major project, the Siakap North-Petai, or SNP which is operated by Murphy is also scheduled to begin delivering its first production this year. Oil was first discovered here in 2007, so its lead time wasn't quite as long as Gumusut. Investors should keep an eye on these two projects which will be delivering the initial production and margin boost that ConocoPhillips is counting on so that it can deliver on its strategic growth plan.

Malaysia should also prove to be needle moving for Murphy Oil. One reason why the company is investing in the country is because it gets some of the highest prices for crude oil in South East Asia. That will do wonders for the returns on the capital it's spending to grow its production, so its no surprise to see it spending an out-sized chunk of its capital on its Malaysian assets. In fact, Murphy is spending 42% of its $3.6 billion development budget this year is being spent in Malaysia.

Bottom line, investors need to keep Malaysia on their radar. It's providing needle-moving production and margin growth for companies like ConocoPhillips and Murphy Oil. Even better, as world oil prices stay over $100 per barrel thanks to increased demand from China these Malaysian investments should yield an even better return than current projections.

Fool contributor Matt DiLallo owns shares of ConocoPhillips. The Motley Fool has no position in any of the stocks mentioned. We Fools may not all hold the same opinions, but we all believe that considering a diverse range of insights makes us better investors. The Motley Fool has a disclosure policy.