Sanofi recently announced that it was nearly doubling its stake in Regeneron. Should investors follow Sanofi’s example?

More than anything, biotech companies need investors who are true believers in their products. In a sector more governed by future prospects than past fundamental growth, investments from the largest pharmaceutical companies can provide a huge boost of confidence for investors in smaller ones.

One recent example is the story of Regeneron Pharmaceuticals (REGN -0.90%) and its major backer, pharma giant Sanofi (SNY -3.10%). At a health care investor conference in London, Sanofi CEO Chris Viehbacher recently stated that his company could increase its stake in Regeneron from 16% to 30%, since the relationship has been "extremely productive." Those soothing words boosted shares of Regeneron 6% to close at an all-time high on Sept. 13. Should investors follow Sanofi's lead and pick up some shares as well? 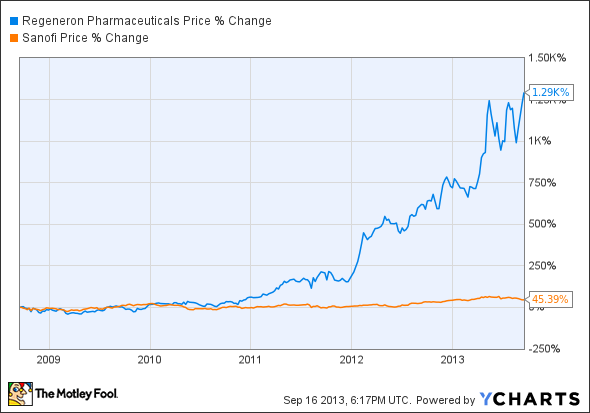 The relationship between Regeneron and Sanofi
Regeneron's primary collaboration with Sanofi is Zaltrap, a metastatic colorectal cancer treatment. However, Zaltrap's future is murky at best. Last year, Memorial Sloan-Kettering Center in New York rejected Zaltrap on grounds that it cost twice as much as a similar treatment, Roche's Avastin, without any noticeable benefits. Both Zaltrap and Avastin improved the median survival rate by 1.4 months. Sanofi responded by halving Zaltrap's lofty price of $11,000 per month -- which merely made it an alternative choice to Roche's widely accepted treatment. In June, Zaltrap was also rejected in the U.K. for pricing reasons.

Under the current expanded agreement, which started in 2009, Sanofi will pay Regeneron $160 million in annual research funding up to 2017. Five antibodies have entered clinical trials already, and the companies have a long-term goal of introducing 20 to 30 more.

Regeneron's own business model
Most of Regeneron's revenue comes from Eylea, its treatment for wet age-related macular degeneration, or AMD, which is co-marketed with Bayer (BAYR.Y -1.47%). Bayer holds the rights to market Eylea outside the United States, where profits from future sales will be split in half. Japan is an exception, where Regeneron receives a royalty on net sales instead.

Wet AMD causes the abnormal growth of blood vessels into the macula, and is currently the leading cause of blindness in the elderly. Although Eylea is approved to treat wet AMD as well as macular edema following central retinal vein occlusion, or CRVO, it is still in phase 3 trials for the treatment of diabetic macular edema, or DME, which causes vision loss and blindness in diabetics.

Last quarter, Regeneron's revenue surged 50.7% year-on-year to $458 million, thanks to strong demand for Eylea. Eylea comprised 99% of total product sales at $330 million, while most of the remaining revenue came from its collaborations with Sanofi and Bayer. Regeneron expects sales of Eylea to hit $1.30 billion to $1.35 billion in fiscal 2013.

Eylea needs to address some major challenges
However, Eylea must be approved to treat both AMD and DME to remain competitive against its primary competitor, Lucentis, which is marketed in the United States by Roche's (RHHBY -1.72%) subsidiary Genentech and sold by Novartis (NVS -2.41%) internationally. Lucentis has been approved by the FDA to treat both AMD and DME, but it carries a fatality warning (6.4% death rate in patients treated with 0.5 mg doses, 4.4% rate in those treated with 0.3 mg doses) whereas Eylea does not.

However, the real problem for treatments like Eylea and Lucentis is Roche's Avastin. Not only is Avastin good for treating cancer, as mentioned earlier, but it is also remarkably effective at treating AMD and DME for $50 per dose. By comparison, Eylea and Lucentis, respectively, cost $1,850 and $2,000 per dose.

Avastin is so versatile because it is an angiogenesis inhibitor, which slows the growth of new blood vessels. Avastin prevents a cancer from spreading by halting new blood vessels, and prevents blindness by stopping blood vessels from growing into the macula.

Lastly, a long-term problem for Eylea, Lucentis, and Avastin is the fact that they are all administered via injections. Other companies are developing non-invasive treatments that are much more appealing than sticking a needle in the eye. These include eye drops, pills, sustained-release delivery systems, and radiation treatments -- all of which could eventually render this current generation of injected treatments obsolete.

Foolish final thoughts
Regeneron is a tough stock to recommend on the basis of Eylea sales alone. Eylea has sold well over the past year, but there are concerns that its growth is topping out. The major threats posed by Roche and Novartis also make Eylea an unstable choice for permanent top and bottom line growth.

On the other hand, Regeneron's collaboration with Sanofi to produce fully human monoclonal antibodies is very promising. Sanofi certainly has faith in Regeneron's technology, and positive test results could lead to other major collaborations with other pharmaceutical companies. This could lead to other sources of revenue which would lessen the company's dependence on Eylea sales.

If Regeneron can keep the Eylea engine running and gain approval for DME while churning out experimental human monoclonal antibodies with Sanofi, the company could be a good growth stock. Yet if the company loses its grasp on Eylea before securing other sources of revenue growth, investors will be badly burned.