Unhealthy for our citizens and our surroundings, the anomaly of such cheap food has serious ramifications.

In a different article  this week, I did my level best to capture all of the positive economic benefits that come along with cheap food. Chief among them is how the cash that would have been spent on food is freed up and put to use elsewhere—creating jobs and spurring innovation.

This cheap food is the product of the combination of new farming technology, increased usage of fertilizers, and genetically modified crops (GMOs).  But is it possible that with such huge food surpluses, we've got too much of a good thing going on here?

When Bad Food is Cheap

Aniruddh Chaturvedi was a student from Mumbai, India who attended Carnegie Mellon. Upon leaving the United States, he shared some of the most surprising things about our country with Business Insider. Among them: "Rich people are thin/ well maintained, poor people are fat. This stems from the fact that cheap food is fatty, rich people don't eat cheap food — they tend to eat either home-cooked food which is expensive or eat at expensive / healthy places."

Though I would argue that home-cooked meals can be very affordable—you just need the time to make them—Chaturvedi points out an important aspect of our agribusiness model: food that is really bad for you is also very cheap. One look at McDonald's dollar menu will tell you that.

This wasn't always the case. But a combination of subsidies to overproduce corn following World War II, and cheap meat being processed in overcrowded farms—and fed some of this very corn—has created the perfect storm  for bad health. Right now, processed corn is present in at least one-quarter of all food products in a supermarket .

As fellow Fool Alex Planes wrote last year, though the cost of feeding America's youth has declined by 19% since 1960, the cost to keep them healthy has risen by almost 150%!

Of all the stats, two simple pictures tell the story the best. 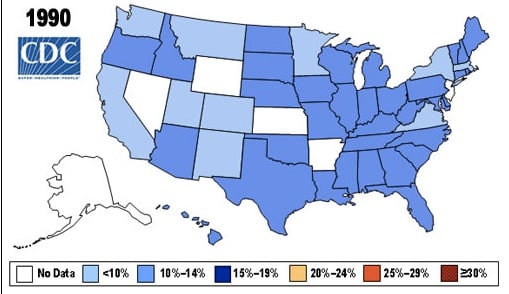 In 1990, it was difficult to find a state with a population of obese residents making up over 14% of the citizenry.  But just 20 years later, there wasn't a single state in the union with obesity rates that low! 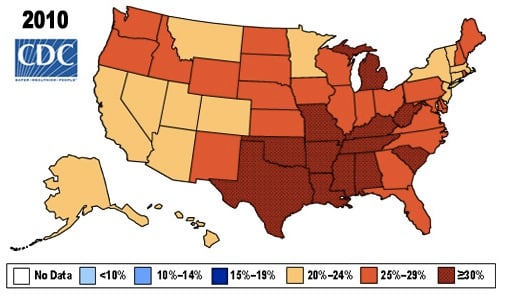 Monospeciation and Mutations
The overabundance of corn alone isn't to blame for Americans' poor health. But because all of that land in middle America is being used for corn or soybeans only, there isn't enough left over to produce non-processed fruits and vegetables—what Americans need more of.

Farmers can't shoulder all of the blame; they are incentivized by subsidies to produce corn. And though local farmers' markets are growing , unless there are enough hungry people nearby, most produce doesn't have anywhere near the shelf life of corn.

And the increasing monospeciation of the American farmland -- which is dominated by corn and soy, and helps keep food cheap -- presents some unique and scary possibilities when it comes to food security.

Monsanto (MON) was the first company to have a GMO seed on the market for U.S. public consumption, but DuPont (DD) and Dow Chemical (DOW) quickly followed in Monsanto's footsteps. Together, these three companies control enormous market share for corn seeds and processing.

In Monsanto's case, the idea is that by buying GMO corn seeds that are resistant to the company's Round-Up herbicide, farmers can plant corn, then use the herbicide, knowing that once-harmful weeds will be killed.

In theory, that sounds great. In practice, nature has always favored adaptations, and weeds are no different. In 2010, Popsci noted  that genetic mutations had led to superweeds that were Round-Up resistant. Because Round-Up Ready GMO crops accounted for 90% of soybeans and 70% of corn and cotton in the United States, these superweeds posed a significant threat to our supply of soy, corn and cotton.

Obviously, three years later, we're still here; no doomsday scenario played out. But we're clearly following the same tortuous pathway: inviting superweeds (or pests) to develop while simultaneously planting more crops that we can't defend when they hit. It's a recipe for disaster.

Booming population
In his 1992 best-seller Ishmael, author Daniel Quinn controversially argued that increased food production isn't a necessity of increased population -- but that the other way around.

Globally, Quinn argued, we humans will always grow our population to meet that of the food supply. We are, after all, simply made up of food in the first place. The more food we cheaply produce, the more our (global) population will grow—even if that food is grown in America and shipped off to other continents.

A hypothetical case from nature provides an easy-to-grasp example. Let's say wolves eat rabbits. As the number of rabbits grows, so will the wolf population. That is, until the wolves eat too many of the rabbits, then the wolf population will slowly dwindle. At some point, it will dwindle enough so that the rabbit population spikes again—and the cycle starts all over. Both populations are kept in check.

In essence, as our resources dwindle, we become less likely to reproduce. 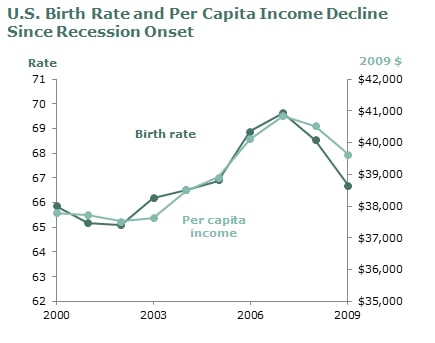 I'll show my cards and tell you that, in reality, I think there's a whole lot of damage done when food becomes as cheap as it is in America.  Not only is our particular system of agribusiness producing unhealthy food, but it's also damaging the environment and a key factor in unsustainable global population growth.

In the end, I'm not saying that we should artificially make food costs higher, or that a growing population is an inherently bad thing. Instead, I would argue that food as cheap as it is now is a historical anomaly, and that for better or worse, there are consequences for deviating so far from our evolutionary norm. Eventually (over hundreds of years) I wouldn't at all be surprised to see us revert back a more-normal mean.