Please ensure Javascript is enabled for purposes of website accessibility
Log In Help Join The Motley Fool
Free Article Join Over 1 Million Premium Members And Get More In-Depth Stock Guidance and Research
By Dan Moskowitz - Sep 19, 2013 at 9:00AM

If you’re looking to invest in a home-improvement store, then this company should present a quality opportunity. You might want to hurry.

Home Depot (HD 1.35%) is often looked at as a better investment option than Lowe's (LOW 2.12%). This often relates to Home Depot being a larger company and having more exposure to consumers. However, Lowe's has outperformed Home Depot over the past year, appreciating 62% versus 30%, and Lowe's is looking to steal some market share with one of its recent moves. Let's take a look at the recent performance for Lowe's as well as how it plans on stealing some market share.

Strong performance across the board
Lowe's impressed in a big way in the second quarter. Consider the numbers below (all year-over-year):

Additionally, comps grew 8% for each month in the quarter.

Lowe's attributes the overall impressive performance to strength in lawn-maintenance products, kitchen and appliances (new LG line seeing strong momentum), hardware, paint, and electrical. In other words, Lowe's is seeing strength in most of its store. To make this story even more appealing, Lowe's saw mid single-digit comps growth in all regions.

The most important trend
We have established where Lowe's is seeing improvement, but we haven't determined why. The biggest reason is housing turnover. With the 30-year mortgage rate slowly creeping higher, now averaging 4.5% vs. 3.5% in April, potential homeowners have been forced into action, wanting to capitalize on historically low rates before those rates climb too high.

Lowe's admits the importance of this trend, and indicated that the company's future performance will strongly hinge on the direction of mortgage rates.

Most realtors state that demand will remain high until the 30-year fixed reaches 6%. If that's the case, then there's still plenty of time for demand to remain high. However, despite the methodical pace, rates are certainly heading north, not south.

The good news is that Lowe's is well aware of this trend, and yet it's still offering strong guidance for the year, expecting FY 2013 total sales and comps to improve 5% and 4.5%, respectively (year-over-year). Lowe's also expects FY 2013 earnings per share of $2.10, considerably higher than the $1.69 it delivered last year. Part of the improved performance on the bottom line will come from approximately $1.6 billion in share repurchases in the second half of the year.

Growth potential
Lowe's has lagged Home Depot in California, which is part of the reason Lowe's decided to purchase Orchard Supply Hardware Stores. This acquisition will give Lowe's 72 new stores in California (still operating under Orchard Supply Hardware Stores) and target under-served markets. If Lowe's successfully grows its presence in California, then it might look to add to this growth throughout the state in the future. Even without future growth, Lowe's will have an opportunity to steal some market share from Home Depot via this acquisition.

Speaking of growth
The revenue chart below displays the past five years. In addition to Lowe's and Home Depot, the chart includes Lumber Liquidators (LL 6.70%), which has been an investor favorite over the past year, appreciating 104% over that time frame. 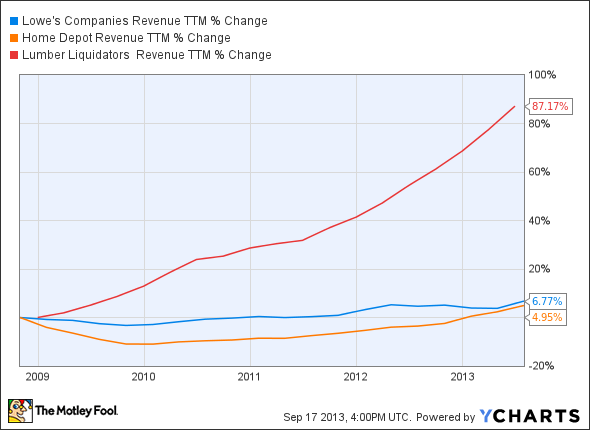 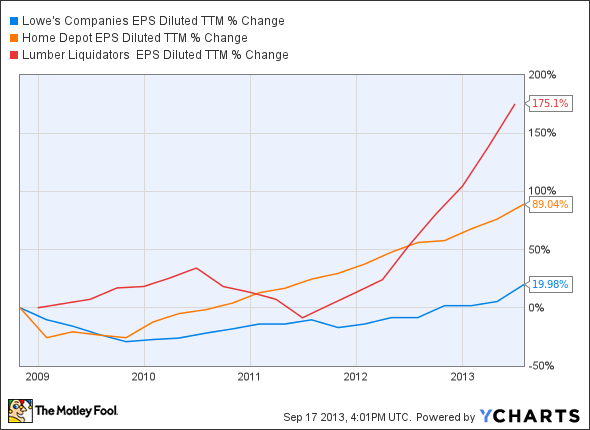 This lofty valuation has led to a 26.6% short position on Lumber Liquidator's stock. Whenever you see a short position this high, you're playing with fire. Traders don't short a stock this aggressively unless they're highly confident that downside risks outweigh upside potential.

The Foolish bottom line
The Lowe's versus Home Depot argument has been running for a long time, and this trend should continue. But just like Coca-Cola versus PepsiCo, it's like splitting hairs. The truth is that they both rely heavily on the housing market.

Considering strong guidance, Lowe's should continue to perform well in the near future. However, keep a sharp eye on the 30-year fixed. If it climbs higher than 5%, investors in all three aforementioned stocks might begin to get nervous and back out of their positions, which will lead to stock depreciation. If you're looking for a long-term investment and you're not paying attention to external events, then Lowe's and Home Depot are both winners.