According to the Medical Market Forecasts, the global medical device, technology and equipment market is expected to rise over $440.5 billion by 2018.

According to the Medical Market Forecasts issued by Espicom, the global medical device, technology, and equipment market is expected to rise more than $440.5 billion by 2018. Similarly, the pharmaceutical industry is also expected to grow at a CAGR of 5.1% per annum for the next few years.

The major portion of this growth is expected to come from emerging markets. BRIC nations will be the leading demand driver for the industry, and these emerging economies will lead to future growth and development of this industry.

In this scenario, we need to look for a company that can capitalize on the growth of medical devices and pharmaceuticals. Hence, I selected Johnson & Johnson (JNJ -0.53%) for my analysis, which is a company well positioned in the industry. J&J has the necessary resources in terms of skills and finance to capitalize on this growth opportunity. Let us conduct a thorough analysis to find out whether the company is a potential investment.

Emerging markets: Your gateway to future growth
BRIC nations continue to increase their sales contribution to the company's total revenue base. In its most-recent quarter, J&J reported that the sales contribution had increased to 21%, 19%, 15%, and 11% from Brazil, Russia, India, and China, respectively. Overall, international sales had increased 12% while domestic revenue had gone up 8%. Since these economies are expected to continue registering future demand, similar growth will be translated into the company's financials.

Why prefer J&J to its competitors
Pfizer (PFE 0.61%) is also operating in the same industry, but is not as geographically diversified. Pfizer is not yet focusing on capturing the growth that exists in the emerging markets. Although the company has been operating in these markets, it has a very low market share compared with Johnson & Johnson. Moreover, the company is generating ROE of 17.84%. Its financial leverage ratio is almost 2.29 times and continues to increase.

Pfizer is over leveraged, which makes its return on equity more vulnerable to fluctuations in the interest rates. Moreover, the company has had a volatile history of making dividend payments. Dividends have declined to $0.92 per share in 2012 from $1.28 per share in 2008.

Conversely, Merck (MRK 1.24%), which is a pure pharmaceutical company, is also operating in the emerging markets but its market share is a lot lower than Pfizer and J&J. It is generating a return on equity of 11.47%. The financial leverage ratio of the company is 2 times and is following an upward trend. Merck also does not have a very promising history of paying dividends. The company did not increase its dividends until 2011. Although it has a higher dividend of 3.58% as compared to the Pfizer's 3.28%, it is expected to remain constant.

Recent developments in the health care industry
The Affordable Care Act is expected to increase U.S. health spending, which will ultimately benefit Johnson & Johnson. In a recently published report by IHS, revenue expansion of the consumer medical device industry is projected to grow at a rate of 5% to 9% for the next few years.

DuPont analysis
Let's examine the company's profitability by conducting a DuPont analysis. The company seems to derive its return on equity primarily from its net margins. The increase in net margins was mainly due to the growth in the company's top line. Besides that, a decreasing financial position also contributed to the increasing return. 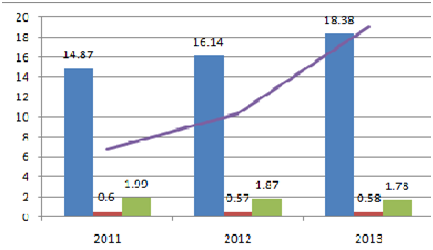 The above chart breaks down the company's return of equity into three main ratios: net margins, asset turnover, and financial leverage. A major portion of Johnson and Johnson's ROE was contributed by the net margins, which is a positive signal as it indicates increasing stability of the company. Moreover, the company has managed to decrease its financial leverage from 1.99 in 2011 to 1.78 in 2013.

The health care industry is all set to experience rapid growth after the full enforcement of the ACA in 2014. Health care is a capital intensive business. With its strong brand image and financial position, Johnson & Johnson is set to capitalize on this growth opportunity. Moreover, its increasing presence in the emerging markets will continue to bring higher profits.

Johnson & Johnson has a bright future. The lower debt profile and increasing dividends make it attractive for investors who are looking for a regular and stable income stream.