Confused by the wide world of utility stocks? This sector ETF can get you started.

Utility stocks tend to offer slow but stable growth and decent dividends. But the wide range of companies can overwhelm new investors while wavering Treasury rates and impending Environmental Protection Agency actions further complicate matters. If you're interested in a utility investment but don't know where to start, consider a sector exchange-traded fund.

Sector ETFs can help you pick up a broad basket of utilities at a relatively low cost. So you can start enjoying the benefits of utility investments without having to worry as much about the future of each specific company.

Several utility ETFs exist but Vanguard has one of the best of the bunch. Here's why you should consider a buy.

Top of the class
Vanguard Utilities ETF (VPU -0.47%) doesn't have the highest liquidity or the lowest price; those titles both go to the SPDR Utilities Select Sector Fund. And Vanguard's net asset value, or NAV, returns come in behind the iShares U.S. Utilities ETF. All three ETFs have nearly identical companies in their top 10 holdings with slightly differing weights.

SPDR's small number of holdings and high asset value makes that portfolio more volatile to the movements of its top companies. The difference between iShares and Vanguard isn't huge but the latter also sells for about $10 cheaper. And Vanguard has a higher dividend yield and more stable NAV returns.

Why is it important to manage volatility in a utility ETF? The sector's heading for some dampening news from the EPA.

EPA crackdown
The EPA is finalizing carbon emissions limits that will likely hind the creation new coal plants. But the Agency's also expected next year to issue new carbon emissions standards for existing coal plants. In other words, it's a good time to provide a non-coal energy source such as wind or natural gas.

So Dominion's the least likely to suffer from an EPA crackdown. And the 5-year returns show that the company has recently pulled ahead after running nearly even with the other two: 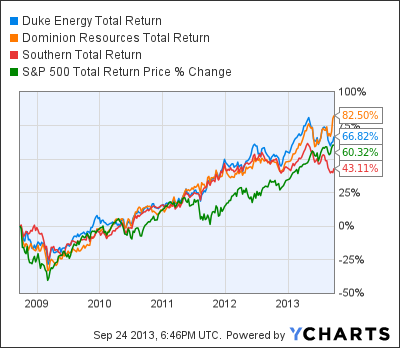 All of the companies have mostly outperformed the S&P 500 in the past five years. Southern isn't dipping this year because of the coal issue. That mostly comes down to investor sentiment -- natural gas is more popular than nuclear energy right now. And Southern's more on the wrong side of that equation.

Vanguard's ETF portfolio had Duke weighted at 7.9%, Southern Company at 6.2%, and Dominion at 5.8% at the end of August. But as I said above the asset spread means that no one company will have a major impact on the ETFs. And that's a good thing as the sector faces off with the EPA.

Foolish final thoughts
Utilities remain a stable investment particularly now that the Treasury rate pullback is waning. The EPA coal standards could throw some bumps in the road for certain companies starting next year. But Vanguard's broad asset spread offers a cushion against that potential volatility.

Brandy Betz has no position in any stocks mentioned. The Motley Fool recommends Dominion Resources and Southern Company. Try any of our Foolish newsletter services free for 30 days. We Fools may not all hold the same opinions, but we all believe that considering a diverse range of insights makes us better investors. The Motley Fool has a disclosure policy.

How to Invest in Utility Stocks

How to Invest in Utilities