Last Friday, BlackBerry (NYSE:BB) pre-announced terrible Q2 earnings results just before the market closed. This news quickly sent the stock down by more than 20%. After this revelation, just about everybody knew that the game was up for BlackBerry -- at least as a public company. 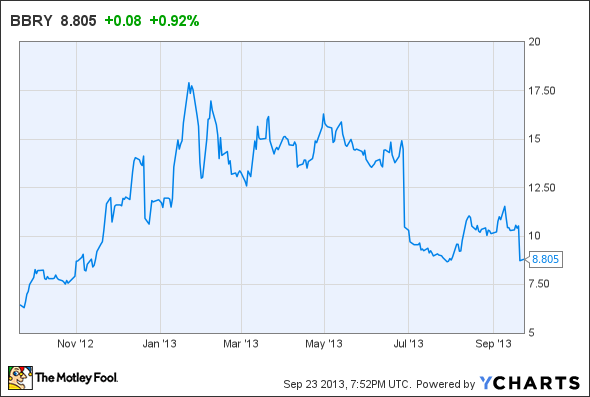 On Monday, Fairfax Financial Holdings -- BlackBerry's largest shareholder -- came riding to the rescue with a $4.7 billion buyout plan. Fairfax and BlackBerry's Special Committee agreed on a letter of intent for Fairfax to take BlackBerry private for $9 per share. While this price is below the level where BlackBerry shares traded as recently as last week, getting out is the best option for BlackBerry shareholders now.

Dreadful results
The results BlackBerry pre-announced last week were nothing short of disastrous. BlackBerry expects to post a GAAP loss of nearly $1 billion, driven primarily by a massive inventory writedown. Revenue plunged to around $1.6 billion last quarter, roughly half of what most analysts expected. BlackBerry is also slimming down its smartphone portfolio to four devices (compared to prior plans for six), and laying off 40% of its workforce.

The root cause of the dreadful results was weak demand for BlackBerry's new BB10 smartphones. While I had expected the release of the company's new Q10 QWERTY smartphone to drive a solid upgrade cycle from longtime fans, even the BlackBerry faithful have been unenthusiastic about the company's new phones. Some longtime BlackBerry users who did upgrade found that the touchscreen aspect of the phone did not work well, leading to high return rates.

BlackBerry Z10 phones are piling up in inventory. Photo: BlackBerry.

With BB10 demand dropping off rapidly, BlackBerry has been forced to stop recognizing revenue on phones as it ships them, because too many phones have been piling up in the channel. Instead, BlackBerry will recognize revenue only when phones are sold through to end users.

Furthermore, now that BlackBerry has introduced a new high-end phone -- the 5-inch Z30 touchscreen model -- it is dropping the Z10 down to "entry-level" status. This change in the pricing scheme for the Z10, BlackBerry's first BB10 device, directly drove the big writedown, as Z10 inventory is now less valuable.

End game
In light of the buyout agreement announced on Monday, it seems likely that BlackBerry pre-announced its earnings in order to help set a price for its negotiations with Fairfax. Fairfax already owns about 10% of BlackBerry, and Prem Watsa -- who heads Fairfax -- was on the BlackBerry board until he stepped down in August due to a "conflict of interest." That conflict of interest was widely known to be his interest in taking BlackBerry private.

While $4.7 billion is a paltry sum for a former technology titan with tens of millions of ongoing subscribers and plenty of intellectual property, a bidding war is unlikely to break out. The most logical strategic buyer would have been Microsoft (NASDAQ:MSFT).

Microsoft's ongoing push to grow in the smartphone market and its big enterprise presence could have made BlackBerry a sensible acquisition target at one point. However, Microsoft just agreed earlier this month to buy Nokia's handset business for more than $7 billion.

While some reports suggested that Microsoft was still interested in BlackBerry even after signing the Nokia deal, it would be very surprising if the company tries to buy two struggling handset makers in the space of a month or two. The integration risks -- already high -- would become enormous if Microsoft tried to buy both simultaneously.

Sad story
As a private company, BlackBerry will likely try to reinvent itself as a firm focused on software and services like mobile device management. The demise of the company's hardware efforts are proof that you need to innovate rapidly to keep up in the fast-moving mobile device industry.

BlackBerry originally planned to launch phones based on the QNX operating system (which later became BB10) in Q1 of 2012. Due to a variety of hardware and software issues, the company delayed the launch repeatedly, so that BB10 phones did not arrive until 2013. Today, it looks like that delay may have undermined BlackBerry's last hope of recovery.