Zynga has suffered a rapid fall from grace. Why? And is there any hope?

With Halloween approaching, ghosts, goblins, and vampires will soon fill the streets. This might frighten some people, but it's nothing compared to what investors in Zynga (ZNGA) must contend with.

Running for the hills
Check out the user trends being seen at Zynga:

You won't find any positive trends in that chart, regardless of how hard you look. The decline in users was primarily due to declining demand for Draw Something. And none of the new games launched in 2012 and 2013 have attracted great interest.

Zynga's strategy is to launch new games, enhance current games, expand into new markets, and offer more distribution platforms. This, in turn, is expected to drive revenue growth via advertising, the sale of virtual goods, and mobile download fees.

Zynga believes there's a lot of growth potential in social gaming. And Zynga might be correct, but due to a low barrier to entry and current competition, Zynga must offer highly appealing games in order to attract new audiences and retain its current audience. Investing in such ventures is expensive, and even if a high-quality game is developed, acquisition costs (advertising to attract traffic to the game) are high.

Zynga launched six new games in the second quarter, including Hidden Shadows, War of the Fallen, Draw Something 2, BattleStone, Solstice Arena, and Running with Friends. It's too early to determine if these games will increase traffic or not, but it at least shows that Zynga is consistently launching new games.

Bleeding hearts
Much of the excitement surrounding Zynga earlier in the year related to its potential in the real-money gaming market. When Zynga acquired Spooky Cool Labs, investors reveled in the anticipation of what could be. Then, Zynga broke a lot of hearts by withdrawing its application to the Nevada Gaming Control Board, announcing that it wanted to focus on social-gaming and social-casino offerings.

This quickly became big news, and investors turned sour on Zynga. But not many investors read the fine print. In Zynga's latest 10-Q filing, it stated that it will continue to test its real-money gaming performance in the United Kingdom (ZyngaPlusPoker and ZyngaPlusCasino via bwin.party). The word "test" indicates that the possibility of real-money gaming in the United States isn't completely off the table.

Don't wake up in tears
Facebook (META -1.76%) remains the primary distribution platform for Zynga. In the second quarter, 68% of Zynga's bookings, and 76% of its revenue came through Facebook. To better understand the agreement between Zynga and Facebook, Zynga writes it as such:

"Contractually, Facebook remits to us an amount equal to 70% of the price stated to our players for use in our games. We recognize revenue net of amounts retained by Facebook. Players can purchase Facebook Credits from Facebook directly through our games or through game cards purchased from retailers and distributors."

They will both switch from Facebook Credits to local currency in the third quarter. Regardless of the form of currency, if there was ever a change or termination to this agreement, it would be devastating to Zynga, and its investors.

Like Zynga, Electronic Arts now has a new CEO -- Andrew Wilson. He intends to focus on digital gaming and profitable growth. It's difficult to determine Don A. Mattrick's strategy at Zynga, other than to offer more games.

But one aspect of Zynga that's often overlooked is its impressive balance sheet -- $1.1 billion cash and cash equivalents vs. no long-term debt. And there's the twist. The title of this article hinted at spooky, but not dead. This strong cash position will allow Zynga to acquire smaller companies and grow inorganically, which might be its best chance at sustainable success.

That said, if you're considering an investment in either Electronic Arts or Zynga, then consider some key metric comparisons:

Neither stock looks attractive on a valuation basis, but at least Electronic Arts offers a positive net margin and return on equity.

Also consider top-line performance over the past year: 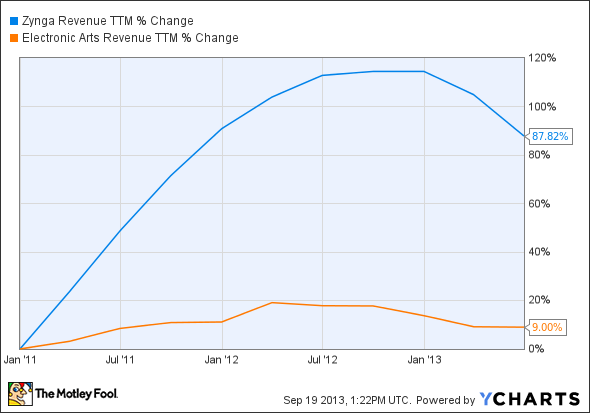 As well as the bottom line: 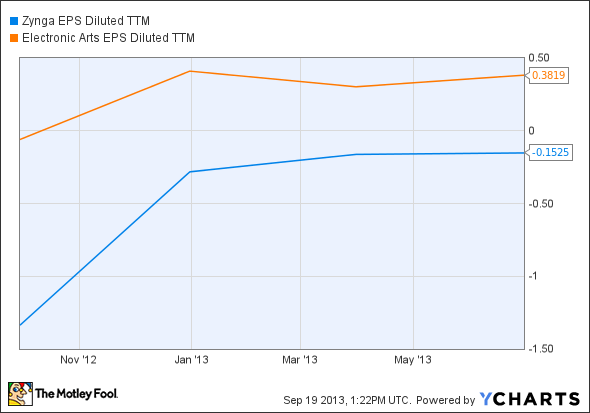 The Foolish bottom line
Zynga isn't dead; it's just spooky. On the negative side, demand for Zynga games has been in decline, and a lot of the company's success will hinge on its relationship with Facebook. On the positive side, Zynga's impressive cash position will allow it to acquire smaller companies to fuel growth.

Dan Moskowitz has no position in any stocks mentioned. The Motley Fool recommends Facebook. The Motley Fool owns shares of Facebook. Try any of our Foolish newsletter services free for 30 days. We Fools may not all hold the same opinions, but we all believe that considering a diverse range of insights makes us better investors. The Motley Fool has a disclosure policy.