The value of optionality.

I had breakfast with a financial advisor the other day. He's been an advisor for almost 30 years, watching people make decisions with their money during everything from the 1980s inflation spike to the dot-com bubble to the 2008 financial crisis.

I asked him what he thought was the biggest mistake people make with their money.

"Not saving enough." He said.

"Not having enough cash. When chaos hits, nobody has enough cash," he said.

"Interest rates have been low for 10 years. So no one wanted to hold cash last decade," he said. "But think about 2008. There were two types of people: those with secure jobs and those without. Then the economy crashed. Those with secure jobs didn't have enough cash to take advantage of once-in-a-lifetime investing opportunities. Those without secure jobs didn't have enough cash to keep their heads above water."

We left it at that. But later it reminded me of something Nassim Taleb wrote in his book Antifragile:

If you "have optionality," you don't' have much need for what is commonly called intelligence, knowledge, insight, skills, and these complicated things that take place in our brain cells. For you don't have to be right that often.

Optionality. That's the key. Cash gives you options other assets don't. It lets you take advantage of some situations and protects you from others. And you don't have to forecast what those situations might be. It's the closest thing to finance's get-out-of-jail-free card.

There's real value to that. How much? I don't know, but it's way more than the 0.001% I currently earn on my cash. The real "return" you earn on cash is its interest rate plus the value of its optionality.

Most people don't think like that. They look at cash yielding 0%, subtract inflation, and assume they're getting a negative real return.

But when you think about the optionality cash provides, you get a completely different outlook.

Well, stocks, of course. But a far better choice was holding cash until the world fell apart in 2009, and then cashing in your "optionality" to use that cash to buy cheap stocks. 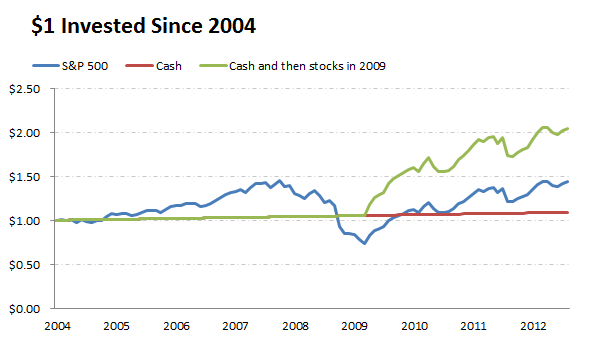 This is a grossly cherry-picked example and created with the benefit of hindsight. But It shows the power of optionality. Cash held in the bank in 2004 only yielding next to nothing if you kept it there for good. If you deployed its optionality when the economy fell apart, its real yield, in terms of the value it provided you, was far higher than the advertised 1%.

So, why shouldn't you keep all of your money in cash awaiting the next crash? The longer you hold cash, the lower its likely optionality value is because it loses value measured against the market's long-term growth. If stocks fall 50% tomorrow, the optionality value on cash today is huge. If stocks triple over the next decade and then fall 50%, it's substantially less. (For more on how I manage cash in my portfolio, see here.)

But whenever I get frustrated at how little interest my cash earns, I remind myself that interest isn't what makes cash valuable. Optionality is. And the value of that option can be enormous.

Fool contributor Morgan Housel has no position in any stocks mentioned, and neither does The Motley Fool. Try any of our Foolish newsletter services free for 30 days. We Fools may not all hold the same opinions, but we all believe that considering a diverse range of insights makes us better investors. The Motley Fool has a disclosure policy.

Want to Buy the Dip? This Real Estate Stock Is a Smart Buy

Why PayPal, Upstart, and SoFi Stocks Are All Falling Today