Retailer's latest effort to find something -- anything! -- to turn around flagging sales is doomed to fail.

Oh, yeah, this is just what's needed: yet another video streaming service offering the same movies you can get everywhere else, with little to differentiate it from others. 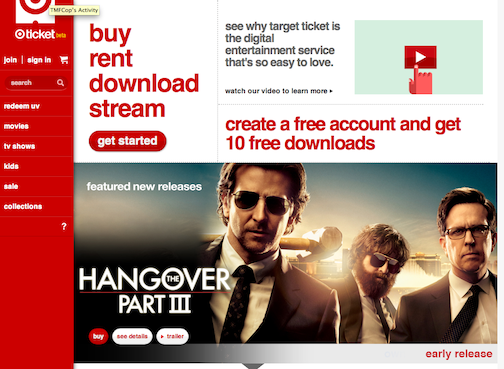 Target (TGT -2.18%) has decided it needs to emulate the modest success Wal-Mart has enjoyed with Vudu by jumping into the arena itself with "Target Ticket," a video streaming service featuring 30,000 movie and TV titles to download or stream at home or on a mobile device. The one twist? It's partnered with Common Sense Media, giving viewers access to thousands of reviews and the ability to filter for age-appropriateness, level of violence, profanity, MPAA rating, and TV Parental guidelines.

This is just a bit too much of the me-too game, and, like a lot of the other ideas Target's thrown at the wall recently -- in-store RadioShack mobile phone kiosks, availability of Best Buy's Geek Squad for electronics purchases -- Target will find this one won't stick either.

As my Foolish colleague Anders Bylund explains, Target Ticket is using the turnkey Rovi Entertainment Store to instantly get a video streaming service up and running within the so-called "10-foot experience," the space in front of the TV or game console that's recently been garnering greater amounts of viewing time.

According to the market researchers at TDG, Netflix (NFLX -0.89%) will see total domestic streaming hours reach 13 billion this year, and top 26 billion hours by 2018. At the same time, Digital TV Research Report says the number of TVs connected to the Internet will reach nearly 600 million by 2017, with the U.S. contributing 147 million connections, more than one-third, by 2017.

In all fairness, Target Ticket isn't necessarily competing with Netflix or other subscription video services like Outerwall's Redbox Instant, because with Target you'll be paying per download or stream, making it more a rival of Vudu, Hulu, and Amazon.com's (AMZN -1.22%) Instant Video.

But that's why Target's effort will likely go the way of its other recent forays away from retailing. There are already so many providers out there; Ticket will be so lost in the crowd that I can't even see it being marginally incremental to revenues. I subscribe to both Netflix and Redbox Instant, and I'm considering canceling the latter even if I continue renting DVDs from its kiosks because it's virtually identical to its bigger rival. That's the fate that awaits Target.

I'm confronted with a plethora of video options on my Roku, which offers dozens of choices, including Netflix, Redbox, Amazon, Hulu, and Vudu -- in addition to dozens and dozens of small, niche channels catering to individualized tastes, like one of my favorites, Zom-Bee TV, offering Web-based horror, haunting, and Halloween content.

Parental ratings and controls aren't such a break-through option that Target's consumers will sign up in droves. Last year Toys R Us came out with a family-friendly tablet called the Tabeo meant to challenge the LeapPad, offering parents the option of a controlled Internet experience. I can hear you asking now: "The what?" Exactly. While it reportedly sold out last year, and a second generation will actually be launched next month, it's not exactly a household name and isn't likely to dent LeapPad sales in the least, let alone those of iPad. And overall sales at the toy seller continue to drop nonetheless.

While you can appreciate Target's willingness to try new things -- and perhaps Target Ticket is a relatively low-cost endeavor, since Rovi's service is a white-label facade on which anyone can slap their logo -- with same-store sales failing to reach estimates and profits plunging 13% in the second quarter, it might be better off spending its limited resources on things that will directly improve its bottom line rather than playing around the periphery on ventures that will distract management's attention.