Please ensure Javascript is enabled for purposes of website accessibility
Log In Help Join The Motley Fool
Free Article Join Over 1 Million Premium Members And Get More In-Depth Stock Guidance and Research
By Ayush Singh - Sep 27, 2013 at 10:43AM

Why Casey’s strong performance should continue.

Casey's General Stores (CASY 0.39%) has performed well despite the uncertainties and inconsistencies surrounding economic growth, underlined by a drop in consumer confidence in September.

Casey's is a convenience store that has performed well over the past five years, as shown below. It has appreciated 33.5% this year, as compared to an increase of approximately 19.5% in the S&P 500. 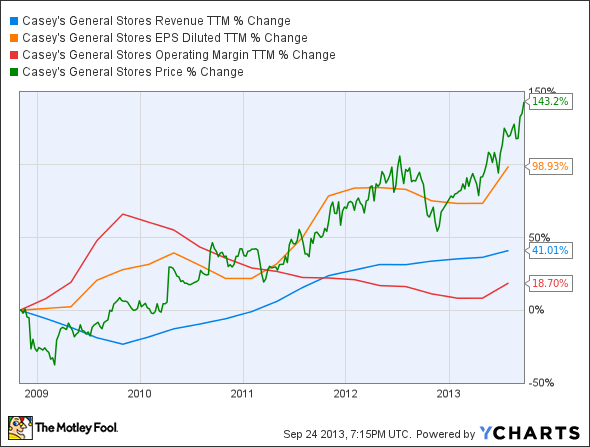 Estimated market size
Despite an uncertain economic environment and job outlook, convenience stores have managed to maintain their growth rate and profitability by offering convenience, value, and a mix of fresh and healthy products. There is great potential for convenience stores in the US.

According to a survey from RNCOS, the overall sales of the convenience store industry were around $575.6 billion in 2010.  This industry is expected to grow at a compound annual growth rate of 11% from 2011-2014 to reach a market size of $856 billion by 2014. Total convenience store sales include fuel as well as in-store sales.

In addition, as consumers become more pressured for time, the speed of convenience stores is proving valuable. As a result, other retailers have also begun to compete with the likes of Casey's for the convenience-driven customer.

Looking around
Casey's has developed a niche market for itself in the retail sector, and has kept itself insulated from pricing pressure from big-box retailers like Wal-Mart (WMT -0.62%) and Kroger (KR 0.32%). It has a very profitable business model: the majority of Casey's stores are in regions with populations of 5,000 or less, and these regions might not be very profitable for big box retailers with huge store sizes.

For instance, Kroger is looking to build larger stores and renovate its existing ones so that it can compete with Wal-Mart and Target. The grocer intends to hire 2,000 people in the next 18 months for its updated and expanded supermarkets.

Kroger's focus on bigger store formats means that Casey's is insulated to some extent from the price wars that these big retailers engage in. As a result, Casey has been able to maintain its strong financial performance, and this is reflected in the latest first-quarter results.

In the previous quarter, gasoline made up 72% of total sales. Revenue increased by 13.2% as compared to the same quarter a year ago, to $2.11 billion. Net earnings jumped an impressive 42.7% and came in at $55.7 million. This worked out to earnings of $1.43 per diluted share.

Looking ahead
Going forward, Casey's aims to increase comps for gasoline by 1.5% with a margin of $0.11 per gallon. The fuel saver program that the company implemented has enabled it to increase its gasoline gross profit by 60% in the first quarter.

In the groceries segment, it aims to increase comps by 5% in the current fiscal year, and also attain a margin of 32.3%. Same-store sales rose by 6.1%, driven by the addition of tobacco products to shelves.

It also aims to increase comps by 9%, with an average margin of 62%, in the prepared food and fountain segment. This will be through 24 hour operations and the continued roll out of pizza delivery.

Expansion is also in the cards. The company aims to build or acquire 70 to 105 stores and replace 20 existing locations. As of the end of the quarter, Casey's opened four new stores and acquired three stores.

However, the company will need to keep a close eye on Wal-Mart, which offers low prices and is also moving into residential areas. According to Bloomberg Industries senior analyst Poonam Goyal, Wal-Mart is opening more stores in residential areas. The retailer is also looking to make groceries more affordable by spending $6 billion to cut prices.

In addition, Wal-Mart's Great Gas Rollback program, which enables customers to save 10-15 cents per gallon on their fuel purchases, will be another point of concern for Casey's as the retail giant expands into neighborhoods.

Conclusion
Casey's has done well in the shadow of bigger peers so far. The company's same-store sales are growing at a good pace and it is expanding its footprint as well by rolling out more stores. Its focus on low-population areas has helped it perform well, and the company could continue doing well going forward on the back of its expansion and its focus on niche areas.

Ayush Singh has no position in any stocks mentioned. The Motley Fool has no position in any of the stocks mentioned. Try any of our Foolish newsletter services free for 30 days. We Fools may not all hold the same opinions, but we all believe that considering a diverse range of insights makes us better investors. The Motley Fool has a disclosure policy.

Will Microsoft Beat Sony in the Console War?

The Smartest Investors Are Buying These 2 Stocks Hand Over Fist