Please ensure Javascript is enabled for purposes of website accessibility
Log In Help Join The Motley Fool
Free Article Join Over 1 Million Premium Members And Get More In-Depth Stock Guidance and Research
By Travis Hoium - Sep 28, 2013 at 2:00AM

The looming debt-ceiling debate could have a terrible impact on the economy.

It may not seem like it, but the U.S. economy has grown steadily since bottoming out in 2009. Unemployment has improved, confidence has risen, and even incomes are finally starting to pick up again.

The only blip on the steady growth curve (seen below) happened in the lead-up to the last budget/debt-ceiling showdown when businesses didn't know if Washington would pay its bills, cut spending, increase taxes, or all of the above. As we approach another showdown, there's fear that the government could have the same impact -- or worse. 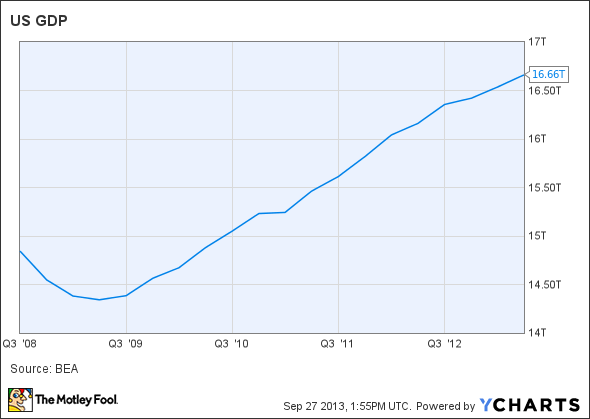 What stock markets and businesses hate more than anything is uncertainty, and there's nothing certain coming out of Washington these days. As it stands today, the two major political parties have backed themselves into a corner, willing to shut down the government to prove a point. A brief shutdown wouldn't hurt too badly, but Treasury Secretary Jack Lew has said we will run out of money to pay bills by Oct. 17, potentially leading to a default on our debt.

There are no good outcomes from default, but that's not the only concern investors should worry about. While it appears businesses are brushing off brinksmanship for now, there are serious potential consequences of the debates going on in Washington. Here are three to keep an eye on.

Government is the biggest demand source in the U.S.
The economy is a fragile entity, especially emerging from the Great Recession. What could make the fragile economy crack is a big cut in economic activity.

That's easy enough to see, but you may not realize that the government is the single-biggest driver of economic growth, or contraction, in the country, accounting for about 19% of GDP. With budget cuts from the last debt-ceiling debate and sequestration hitting, along with the end of stimulus spending, government spending has actually been a drag on the economy since 2011. 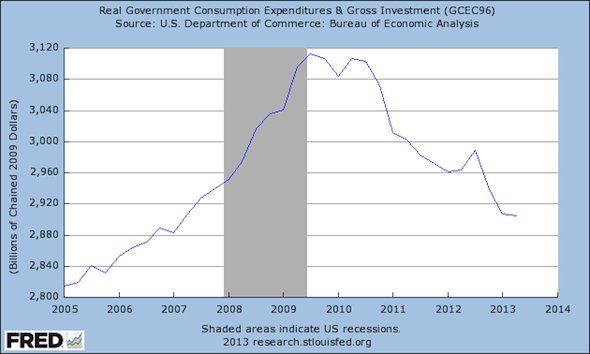 Cuts to spending will likely continue, given the large budget deficit, but a sharp drop-off in spending could kill any economic growth that's taking place. It would also negatively impact employment, which almost all lawmakers say is their No. 1 priority.

Keep an eye on what is cut, how fast it's cut, and how it will impact employment as Washington tries to find a solution to the budget and debt ceiling debate.

It was this uncertainty that likely led to a quarter of negative growth in 2011 and the worst quarter of growth in 2012 -- Q4, which just happened to coincide with the election. The faster this debate ends, the faster businesses can focus on growing, which is what creates growth in the jobs market.

Default is no way out
Make no mistake about it: A U.S. government default on its debt is the worst possible outcome. Stocks would fall, bonds would plunge, mortgage costs would jump, companies wouldn't be able to afford debt, and more. There would be a myriad of consequences that would happen almost overnight, all of which would be bad for the economy.

The biggest reason a U.S. default would be worse than, say, Italy or the city of Detroit is that U.S. debt is viewed as the safest financial instrument in the world. Therefore it's what everything else is benchmarked by. The value of everything from stocks to bonds to oil is affected by the rate on U.S. Treasuries.

That's why many senior people in Congress say default isn't an option. It's almost unthinkable how bad the fallout would be if default did occur. It's simply no way out.

Washington's actions trickle down to Main Street
Don't be surprised if the Dow Jones Industrial Average (^DJI -0.89%) and S&P 500 (^GSPC -1.35%) are unusually volatile over the next few weeks as this debate takes place. Traders can react quickly to changes in Washington, both good and bad.

Next week there's the potential for a government shutdown to worry about and by mid-month the debt ceiling will have to be addressed. In the past, traders have gotten nervous about the debt ceiling as it approaches, and I wouldn't be surprised to see the same take place this time. The Dow and S&P 500 have actually rallied nicely as Washington has headed to this deadline, but there's only so much time left.

Washington has proven it has little ability to get things done ahead of time so we're resigned to another down-to-the-wire negotiation in Washington. Just hope that there isn't too much fallout for stock markets or businesses across the country.

Fool contributor Travis Hoium has no position in any stocks mentioned. The Motley Fool has no position in any of the stocks mentioned. Try any of our Foolish newsletter services free for 30 days. We Fools may not all hold the same opinions, but we all believe that considering a diverse range of insights makes us better investors. The Motley Fool has a disclosure policy.