Please ensure Javascript is enabled for purposes of website accessibility
Log In Help Join The Motley Fool
Free Article Join Over 1 Million Premium Members And Get More In-Depth Stock Guidance and Research
By Brian Shaw - Sep 28, 2013 at 9:00AM

Apple's release of iOS 7 has brought a powerful competitor into Pandora's market.

Three months ago, I posed the question of whether Apple's (AAPL -0.24%) iTunes Radio would be the "beginning of the end" for Pandora (P). While the -60 score on my underperform CAPScall is a clear indication that the market disagrees with my concern, the actual release of iTunes Radio last week warrants a second look at this analysis.

A better customer experience
Thus far, the reviews for iTunes Radio have been quite positive. For example, CNET recently published a review that clearly declares iTunes Radio the superior choice over Pandora, and users of both services can quickly see why. While many initially dismissed iTunes Radio as an imitator, there are a number of reasons both subtle and obvious why it is a compelling option. Here are a few highlights:

As a longtime user of both iTunes and Pandora, I am hard pressed to find any aspect of the streaming music experience that is superior on Pandora. Even Pandora's long-touted recommendation engine doesn't provide it with an advantage; in an anecdotal test, I found myself pressing the thumbs down button in Pandora far more often than than the "never play this song" button in iTunes Radio.

How big is the threat
To be clear, Pandora is far more ubiquitous than iTunes Radio. While there are hundreds of millions of Macs, PCs, iPhones, iPads, iPods, and Apple TVs in use that have support for iTunes Radio, Pandora goes above and beyond this population with Android-based mobile devices, smart televisions, blu ray players, Roku boxes, and any number of other platforms. So, there are plenty of devices where Pandora remains the best streaming option around. However, it is worth taking a look at just how many Pandora users might be migrating to iTunes Radio.

This should be an enormous reg flag for Pandora investors. A staggering 40% of the existing subscriber base has any number of good reasons to abandon or reduce usage of Pandora in favor of iTunes Radio; these reasons vary from already subscribing to iTunes Match (which makes the commercial-free version of iTunes Radio essentially free), a better user interface, or sophisticated interaction with a user's existing music library.

While there is a real threat to Pandora's existing user base, there is even more risk to Pandora's ongoing growth. Apple recently announced that iOS 7 was downloaded to over 200 million devices in the first weekend after release; this staggering adoption rate has already resulted in iTunes Radio being installed on multiple times the number of users of Pandora in just a few days. When iOS users first look to experiment with streaming music, there's a good bet that iTunes Radio will be the starting point.

What does this mean for Pandora?
I am not saying that all users will abandon Pandora in favor of iTunes Radio. Not even all iOS users will make the switch. However, a large number will make that switch, and I expect that to be a significant drag on Pandora's previously strong revenue growth.

It is also important to revisit the profitability of Pandora's business model. This chart tells the story: 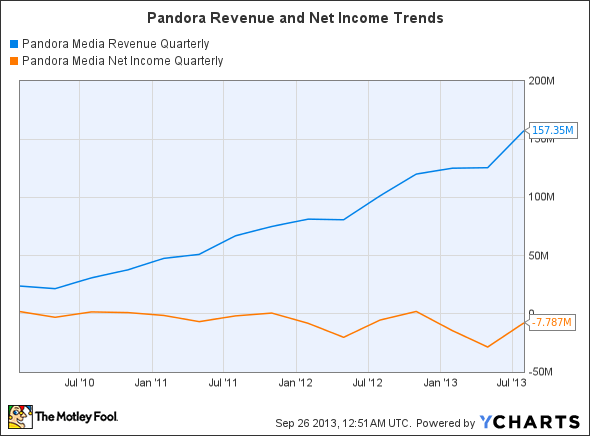 Pandora's revenue has exploded in the past couple of years, but the company continues to generate losses as its business model continues to fail to overcome steep content acquisition costs. At some point, Pandora needs to start generating income in order to stay alive.

In contrast, Apple does not need to profit from iTunes Radio. The company has the luxury of making the service a gateway to further iTunes revenues, an enhancement to it iOS ecosystem, or even just a pet project for management. Regardless, the success of Apple doesn't hinge on the profitability of this service; this is a significantly more enviable position to be in than Pandora's life and death struggle to make streaming music profitable.

There's competition everywhere
To make matters worse, Apple is only one of many competitors fighting for user attention. While Pandora boasts that it captured a 7% share of domestic radio listening in August (prior to iTunes Radio's release), that means that 93% of radio listeners use another service. Listeners seeking free, advertiser-supported radio options listen to traditional over-the-air AM and FM radio stations, HD radio, free streaming services such as iHeart Radio, and competing mobile apps such as Spotify.

When you combine the entrance of Apple's iTunes Radio as a direct competitor with existing competition and Pandora's struggles to become profitable, it becomes quite difficult to justify Pandora's market capitalization of $4.5 billion. As a result, shareholders should beware of the incredible amount of risk associated with owning shares of Pandora at today's prices.