A return to normalcy could be a troubling development for automakers.

Although hedge fund manager John Paulson is perhaps most famous for his contrarian bet against the housing market just prior to its collapse, that feat was presaged by an even more wily investor, billionaire Sam Zell, whose Equity Residential real estate investment trust has become the biggest REIT in the business, valued at almost $20 billion.

Zell, who's made more than a few dollars investing in the damaged goods others have discarded by buying undervalued, distressed assets that still have some intrinsic value left in them -- making him in the process "the poor man's Warren Buffett," as a recent Forbes article called him -- sees the current stock market raised to unsustainable heights led by a "tsunami of liquidity," driven by the Fed's insatiable quantitative easing programs. He says today's market is like the housing market just before the crash.

Like all points that head off to the extreme, they tend to revert to the mean. Housing prices had to correct some 40% before they arguably reached equilibrium, gold seems to be marching toward a more historically appropriate level, and coming from the other direction, auto sales are back to pre-recession levels with over 16 million vehicles sold on a seasonally adjusted basis.

The average car on the road is now more than 11 years old because car buyers went on hiatus during the recession; some analysts argue that this situation represents a still powerful upward bias for car sales. August numbers seem to underscore that sentiment with auto sales up 17%. Toyota (TM 0.85%) recorded 23% more sales in the month, ahead of Nissan (NSANY 0.38%), which was up 22%, which in turn was well ahead of U.S. automakers General Motors (GM -1.51%) and Ford (F -2.44%), who sold 15% and 12% more cars, respectively.

And their stocks are soaring, too. Toyota is 40% higher in 2013, Ford is up 35%, and GM trades at a valuation 26% greater than where it started the year. Specially notable is Ford, which a few years ago was priced like some of the best penny stocks, but has since mounted an amazing comeback after refusing government handouts, quadrupling in value over the last five years. 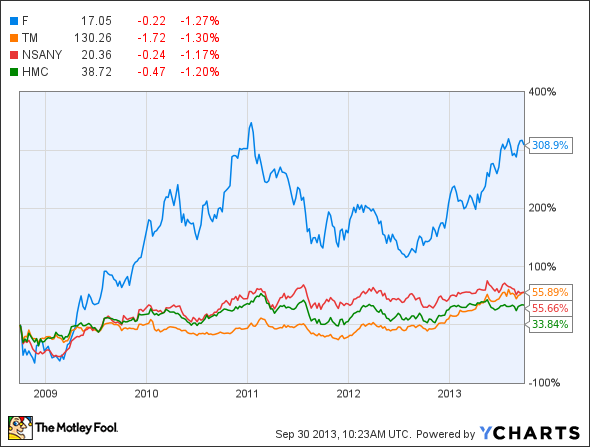 And therein lies the problem: Not that Ford has come so far -- stock prices are a relative thing -- but that the market for new cars may be peaking, perhaps not this month, or even this year, but the engine of growth for car manufacturers is about to stall.

No one with more knowledge of the industry than Toyota says that come next year, demand from all those people who had been hanging onto their used cars will be sapped. In an interview with the Associated Press, Toyota's North America CEO says the economy needs to create more jobs faster or the drive forward will hit the brakes.

Also working against the industry is the fact that the number of used cars that were only one to five years old had been at levels not seen in almost three decades. The number of junkers had disappeared which drove up used car prices, making new cars just as attractive an option -- thanks to Cash for Clunkers, which required the old cars that were turned in to be scrapped. But with all those trade-ins, supply is up again and we can expect used car prices to fall.

Ford, as the industry leader that has made such great progress, may then be at greatest risk of falling furthest if Toyota's prognostication comes to pass. The industry as a whole has been a bright spot in an otherwise lackluster economy, but even that bulb may go out and automakers' stocks may be ready to run off the road.

Fool contributor Rich Duprey has no position in any stocks mentioned. The Motley Fool recommends Ford and General Motors. The Motley Fool owns shares of Ford. Try any of our Foolish newsletter services free for 30 days. We Fools may not all hold the same opinions, but we all believe that considering a diverse range of insights makes us better investors. The Motley Fool has a disclosure policy.