Please ensure Javascript is enabled for purposes of website accessibility
Log In Help Join The Motley Fool
Free Article Join Over 1 Million Premium Members And Get More In-Depth Stock Guidance and Research
By Robert Zimmerman – Sep 30, 2013 at 9:40AM

These three Canadian oil and natural gas companies have languished since 2011. Do any of them have what it takes to turn themselves around?

April 2011 marked a high point for three Canadian energy companies. All three were big on natural gas production and exports to the United States. Then the price of natural gas dropped like a stone, US natural gas production obviated imports, some natural disasters hit, and the prices of these companies got whacked. As the chart below shows, Canadian oil production climbed and continues to climb through all of this. I regard these three energy companies as "stooges" since they should have made money for their investors and didn't.

Below we'll look at these companies and evaluate their turnaround prospects.

Betting big on Western Canada
Penn West Exploration's (NYSE: PWE) stock did well from 2009 until April 2011 when it began a two-year decline. Of particular note, oil revenues suffered due to limited pipeline and other "take away" capacity. Throw in the lost natural gas revenues and currency exchange issues, and it's no wonder the stock took a hit.

Penn West has other liabilities. As newly appointed CEO David Roberts pointed out during the company's most recent earnings conference call, Penn West spends $3-$5 a barrel more in production costs than its competitors. That hurts. The company recorded negative cash flow for the past two years and currently has no virtually no cash. That is thin financial ice. During its recent presentation at the Peters and Company 2013 Energy Conference, the company highlighted inefficiencies with its logistics and basic exploration and production activities. That is a fundamental weakness.

Can Penn West pull off a turnaround? The company is certainly trying. Penn West took steps to streamline its operations and laid off roughly 30% of its workforce. It cut its dividend. The company also focused its exploration and production efforts on the Cardium and Viking oil plays while reducing production well costs from $1.35 million to $1.1 million.

Strength in the Gulf and the bank
In some respects, Encana (OVV 1.05%) resembles Penn West. Encana stock took a drubbing at the same time as Penn West. Encana also recently named a new CEO to lead it back to profitability. The new CEO declared that Encana needs to focus its efforts and is particularly optimistic about its Duvernay assets near Penn West's Cardium fields. Dividend cuts also came to Encana with the prospect of more cuts on the way.

Encana is primarily a natural gas producer at a time when there's a lot of gas being produced in Canada and the US. In 2012, Encana was forced to write down the value of its natural gas assets secondary to falling gas prices. Now it is playing catch up in the sense that it is expanding into oil and natural gas liquids to build its cash flow. Encana also spun off its oil assets as Cenovus Energy back in 2009. In 20/20 hindsight, this hurt the company.

Three differences distinguish Encana from Penn West: First, Encana has oil assets in the Gulf of Mexico. Unlike Canadian oil assets, the Gulf has no significant takeaway bottlenecks. Even better, Gulf oil commands a higher price than Canadian oil. Second, Encana has cash in the bank, over $3 billion in cash and short term equivalents at the end of 2012. Lastly, Encana shares its risk with others through joint ventures while Penn West largely goes it alone.

Running risks abroad
Rounding out the stooges trifecta is Talisman Energy (NYSE: TLM). It has a familiar story: A Canadian company that relied too much on natural gas and got smacked in April 2011. It needs to reduce debt, to focus on core oil or liquids rich plays, to reduce administrative expenses, and to improve efficiencies in its drilling operations. Talisman acknowledges all this and has worked to achieve these goals.

The latest Investor's Day presentation reveals a corporate strategy to focus on American and Asian oil plays. In the Americas, instead of developing Western Canadian assets, Talisman wants to sell some of them. It will focus instead on the Eagle Ford and Columbia. The Eagle Ford play is understandable, but Columbia seems risky. Similarly, the Asian plays include Malaysia, Vietnam/South China Sea, and Kurdistan, Iraq. The last two countries seem even riskier given their governments or political climates.

Reducing operating costs came through layoffs and improved efficiencies in the field. Talisman reduced its cost per well in the Eagle Ford play from $11 million in 2011 to $9.2 million by the end of 2012. More cost reductions in drilling operations are planned. The company also reigned in capital expenses and plans to keep capital spending in line with cash flow.

Final Foolish thoughts
For perspective, the chart below compares the stock prices of my three Canadian stooges to oil producer Continental Resources, an American company producing oil from the Bakken. Look on the bright side: the stooges seem to have hit bottom. 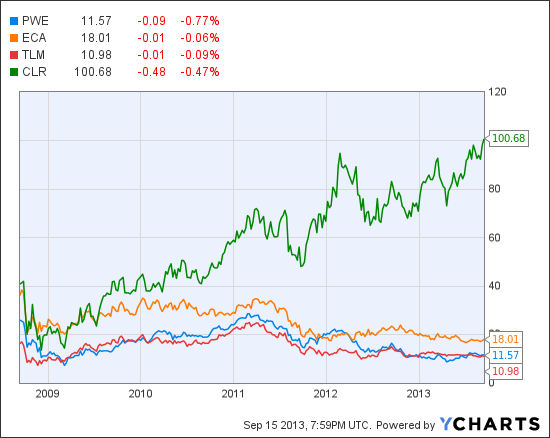 Of the three, Encana looks most promising. It produces oil in the Gulf of Mexico while improving its operations in Canada. Penn West looks almost completely dependent on its Cardium and Viking assets. If these don't work out quickly, Penn West's poor cash position may cause trouble. Talisman has producing assets in Eagle Ford, but its intention to invest heavily in high-risk countries makes me nervous. I'd put my limited funds to work in safer plays.

Robert Zimmerman has no position in any stocks mentioned. The Motley Fool has no position in any of the stocks mentioned. Try any of our Foolish newsletter services free for 30 days. We Fools may not all hold the same opinions, but we all believe that considering a diverse range of insights makes us better investors. The Motley Fool has a disclosure policy.