Every collection has a top, a middle, and a bottom -- even the elite Dow Jones Industrial Average.

The Dow Jones Industrial Average (^DJI -0.50%) has scored a 49% return to investors over the last three years, on a dividend-adjusted basis. But that doesn't mean that all 30 of the current members toed the line with similar returns. The gains range from 13% to 164%, even after cutting loose some of the index's worst performers.

Let's take a look at the catalysts behind these widely separated Dow returns. 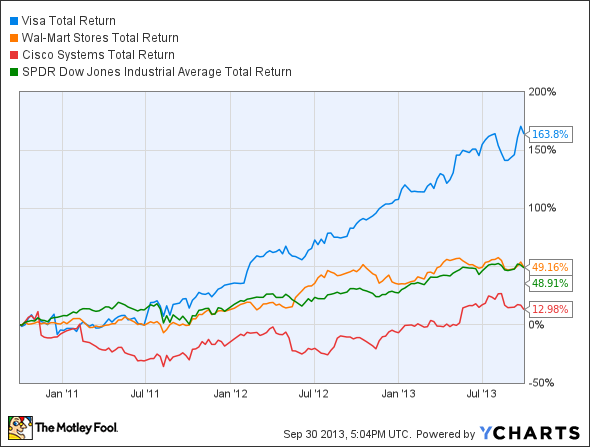 The critics were kind of right since Visa's revenue and income growth have indeed slowed down a bit in recent years, but they were wrong where it counted. You see, investors have been perfectly happy to drive Visa's P/E ratio even higher as the high-margin business model proved its worth. Earnings have occasionally floundered but Visa's share prices never missed a beat. That's how the Dow's strongest three-year performance took shape. 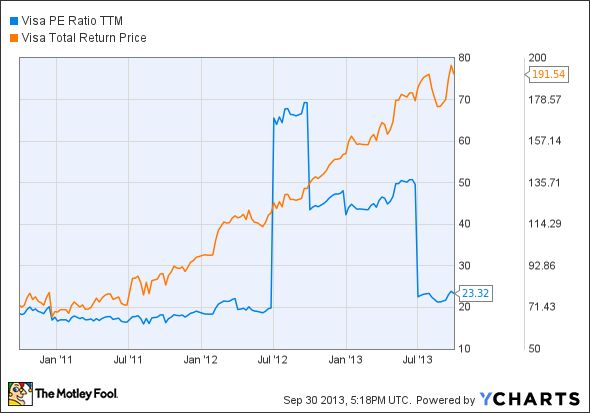 Sitting right at the Dow average, Wal-Mart (WMT 0.11%) tells a very different story. The retail giant has remained a very close proxy to the total Dow ever since the 2008 panic. And why not? Sam Walton's big-box empire delivers rock-solid margins and steady if unspectacular growth in a wide variety of market conditions.

Like the stock market itself, you can expect Wal-Mart to deliver steady results over the long term. Speed bumps and temporary boosters come and go, but the solid fundamental story always remains. That's why you can treat Wal-Mart shares like a proxy for the Dow -- or for the total market. It's not always a perfect match but the basic drivers rarely stray far from the general economy's health.

In 2009, Cisco decided to get into the server systems business. That meant stepping on the toes of its most important partners, which had helped Cisco sell networking bundles along with their own server systems for decades.

That decision started cutting into Cisco's results in 2011, but the company stayed committed to its new strategy. CEO John Chambers apologized for Cisco's underperformance and promised to simplify the business, and that process is still going on.

The server line is finally starting to pull its own weight, but strategy shifts can be painful. That's why Cisco delivered the Dow's weakest returns in the last three years.

Fool contributor Anders Bylund holds no position in any company mentioned. Check out Anders' bio and holdings or follow him on Twitter and Google+.

We Fools may not all hold the same opinions, but we all believe that considering a diverse range of insights makes us better investors. Try any of our Foolish newsletter services free for 30 days.