Micron Technology (NASDAQ:MU) just cemented its recent gains with an impressive fourth-quarter report. Shares prices have tripled over the last year, and this is exactly where the stock belongs.

The memory-chip maker reported mixed results last night. Revenues jumped 45% year over year to $2.8 billion, beating analyst estimates by 5%. Adjusted earnings landed at $0.20 per share, up from a $0.24 loss per share last year but below Street targets. All told, the stock opened 4% lower on Friday -- a small adjustment for a stock that more than tripled over the last year. 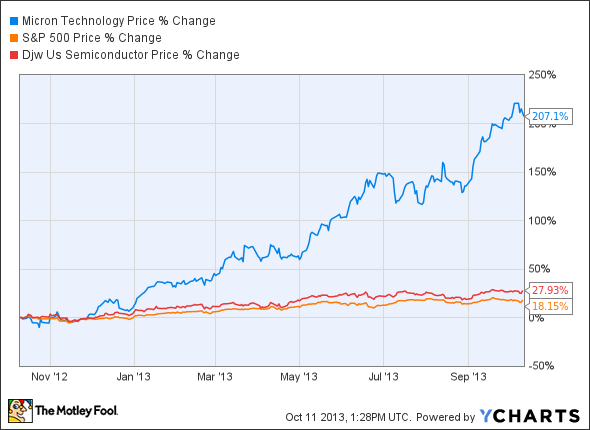 The non-GAAP earnings exclude a whopper of an item this time. Micron bought bankrupt Japanese rival Elpida and grabbed a majority stake in Taiwanese competitor Rexchip for pennies on the dollar, paying $949 million for DRAM-building assets valued at $2.4 billion. The result: a $1.5 billion one-time accounting gain, or $1.31 per diluted share. Micron's DRAM manufacturing capacity doubled overnight.

What's the Elpida difference?
Micron's new DRAM scale gives the company pricing power, since Micron can control the supply side of the supply-and-demand equation in a whole new way. Furthermore, the acquisition puts Micron-owned memory chips in leading smartphones and video game consoles, both of which are expected to drive volume growth for years to come.

"We have a large product portfolio in every critical segment of the DRAM market, and we will now turn our focus to optimizing margins and returns," said CEO Mark Durcan in last night's analyst call. And what's next? "Micron's total DRAM bit production, including Elpida, should be slightly above the industry this year and below the industry next year."

That's a key driver for Micron's stock value. Before this acquisition, Elpida had no incentive to reduce its DRAM output because the company needed every last penny of low-margin sales just to stay afloat. Market titan Samsung treats memory chips as an amusing hobby, since the Korean company sells everything from smartphones to refrigerators.

But now we have one company with solid financial footing and a laser-like focus on memory chips. And it's the second-largest DRAM manufacturer in the world, so you can expect the volatile memory chip prices to stabilize swiftly. That's good news for Micron's margins.

Some of Elpida's DRAM capacity will be converted into NAND flash memory production lines. That's a higher-margin market where global demand will outgrow DRAM demand for the foreseeable future. Micron expects the DRAM market to expand by roughly 30% annually over the next 5 years while NAND demand explodes 43% higher on a yearly basis.

What's next for Micron shareholders?
The Elpida buyout makes me a happy Micron shareholder. Micron is also one of my most successful CAPScalls to date, thanks to this strategic acquisition. The bad old days of never-ending price wars and negative operating margins are gone, and I don't think they're coming back.

In short, I plan to own Micron stock for the long haul. The company just became a global leader in an important market -- with the power to stop the price wars that plague every heavily commoditized industry. Next up, I wouldn't mind if Micron's board decided to reward investors with a small dividend. Cash flows just became both positive and predictable, after all.