A study by Harris Interactive digs into the American psyche and discovers which five diseases terrify Americans the most. While you may have seen number one coming a mile away, the other answers may surprise you.

We are a nation of worriers -- and with good reason. According to the World Health Organization's International Classification of Disease, version 10, there are 12,420 different types of diseases in the world. To put it mildly, it's a wonder that U.S. life expectancy rates have been on the rise for decades because there are thousands of diseases that could strike at any moment.

A big credit to rising life expectancy trends goes to pharmaceutical companies for improved treatments options to many of these diseases and disorders. Also, increased health awareness in the U.S. via the Centers for Disease Control and Prevention has been crucial to both increasing the average life expectancy and improving most Americans' quality of life.

However, there are still diseases out there that cause us to shake in our boots. Certain diagnoses have a way of inspiring fear in Americans unlike others, which is why, in 2011, Harris Interactive set out to discover exactly what those were.

Harris, on behalf of the MetLife Foundation, conducted its survey in September 2010 by asking 1,007 U.S. adults what disease they feared the most, giving them options to choose from. Some of the results were surprising, while others were on par with what you'd expect. Let's have a look, in reverse order, at what diseases Americans fear the most. I'll also add some investing flair by noting an existing or upcoming drug worth keeping an eye on within each disease type that could have an opportunity to significantly change things for the better.

No. 5: Diabetes (6%)
According to the CDC, there are 25.3 million diabetics in this country and 79 million more people exhibiting the symptoms of pre-diabetes. That's basically one-third of the U.S. population!

Diabetes is often brushed aside as a nuisance rather than a serious disease, but prolonged exposure to high blood sugar can cause heart attack, stroke, and kidney failure. It's the leading cause of blindness and lower-limb amputations in this country. Diabetes was also the seventh leading cause of death in the U.S. in 2010.

The majority of people aren't born with diabetes (type 1 diabetes). Rather, they develop diabetes through some mixture of genetics and lifestyle habits such as poor food choices or lack of physical exercise (type 2 diabetes). Approximately 90% of the aforementioned diabetes cases in this country are of the type 2 designation.

Just last week, actor Tom Hanks admitted that he has been dealing with symptoms of type 2 diabetes for the past two decades. It's my personal hope that having a high-profile role model in place will give this disease the acclaim it needs to get high-risk people to eat healthier and exercise more.

Within this disease space, I'm fixated on SGLT2 inhibitors like Johnson & Johnson's (JNJ -3.07%) Invokana, which is targeted at treating type 2 diabetes. The reason SGLT2 inhibitors are so exciting is that they work in the kidneys to block glucose absorption, as opposed to previous generations of diabetes drugs that worked out of the pancreas and kidneys. The end result is the ability to flush out excess glucose through a patient's urine. In addition, previous type 2 diabetes medications either caused weight gain or were weight neutral as in the case of DPP-4 inhibitors, but Invokana was actually shown to induce weight loss in patients!

No. 4: Stroke (8%)
Stroke was the fourth-leading cause of death in 2010, but you'd hardly know it with just 8% of Americans saying they fear it the most. This relatively low percentage could have a lot to do with the risk factors for stroke being pretty well-defined.

In June, we took a closer look at the three biggest risk factors for a stroke and discovered that many related to lifestyle choices (i.e., diet, exercise, and whether you smoke or drink alcohol). Other factors that increased your chance of a stroke included hereditary factors like ethnicity and age, as well as existing medical conditions like high blood pressure, high cholesterol, and of course, diabetes. This doesn't make the prospect of having a stroke less scary, but it does help narrow down a person's risk potential dramatically.

Here, I believe the big name to watch is newly approved Eliquis made by Bristol-Myers Squibb (BMY) and Pfizer (PFE -0.38%). This revolutionary blood thinner was approved by the Food and Drug Administration in late December to prevent stroke in patients with atrial fibrillation. When pitted side-by-side against Warfarin, which has been a blood-thinning mainstay for two decades, it outperformed in numerous categories. It certainly has the potential to become a blockbuster drug over the next decade.

No. 3: Heart disease (8%)
Heart disease may be the top killer as of 2010 -- directly responsible for nearly 598,000 deaths in the U.S. -- but less than 10% of Americans are most afraid of it. It's hard not to be concerned with heart disease because there are so many variables that act as risk factors, including high blood pressure, high cholesterol, obesity, diabetes, poor diet, your gender, and family history.

To put heart disease's mortality into scope, the fourth through 10th leading causes of death in 2010 don't combine to account for the number of deaths caused by heart disease. Perhaps nothing puts this country at greater risk than our overwhelming obesity figures. With a whopping 35.7% of this country considered obese -- and obesity coming with a higher risk of high blood pressure, high cholesterol, and diabetes -- the deck is stacked against a good percentage of the population. 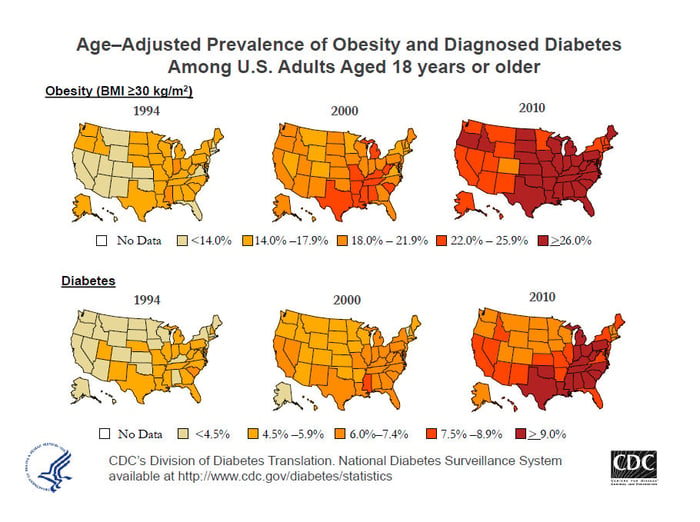 Perhaps the biggest reason Alzheimer's jumps up the list is because it's one of the most misunderstood and relatively untreatable diseases still out there. Harris Interactive's poll notes that 62% of those polled admitted to knowing "nothing" or only "very little" about Alzheimer's. Furthermore, the poll indicates that even though 44% of respondents noted knowing a family member or friend with Alzheimer’s, only 18% of people have developed a plan should they get Alzheimer's, with regard to long-term care options and financial planning.

The disease itself is incredibly tricky to treat because of the blood-brain barrier, which makes getting medication from the blood into the brain difficult. In 2012, we saw two novel medications flop in late-stage trials including Pfizer and Johnson & Johnson's bapineuzumab, as well as Eli Lilly's (LLY 0.01%) solanezumab, which possibly demonstrated early-stage disease effectiveness but otherwise fell well short of study expectations.

When it comes to treating Alzheimer's, I would suggest keeping your eye on Eli Lilly despite its late-stage disappointment with solanezumab. In 2012, international scientists chose solanezumab -- which attaches to amyloid floating free in the brain before it attaches and become plague -- and LY2886721 -- which blocks a specific enzyme used to make amyloid -- (as well as a drug from Roche) for a long-term (three-year) Alzheimer's study out of 15 possible drugs. It's far too early to guess whether these compounds will be successful, but you have to like Eli Lilly’s chances with two of its experimental drugs being chosen out of 15 hopefuls.

No. 1: Cancer (41%)
Once again, cancer reigns supreme as the most feared disease in America.

The No. 2 leading cause of death behind heart disease likely tops the rankings because of how quickly the disease can strike and the suffering it can cause. This isn't to say that the aforementioned diseases aren't debilitating, but treatment for many cancer types can involve painful surgeries, radiation and chemotherapy that can lead to unpleasant side effects, and very low success and survival rates depending on the cancer type. Some of the more common cancer types like lung cancer and pancreatic cancer carry with them five-year survival rates of just 17% and 6%, respectively. It's a noticeable improvement since 1975, but is hardly encouraging all things considered.

We are certainly seeing advancements in numerous cancer fields as I noted in my 12-week-long Tackling Cancer series a few months back, but perhaps no drug is ready to reshape cancer treatment more than Pharmacyclics' (NASDAQ: PCYC) ibrutinib. This experimental therapy has received the breakthrough therapy designation from the FDA and was recently submitted as a new drug applicant based on some incredible mid-stage study results. Ibrutinib is designed to treat mantle cell lymphoma (MCL) and chronic lymphocytic leukemia (CLL), the most common form of leukemia in adults. In MCL trials, ibrutinib delivered an overall response rate (ORR) of 68% with a median response duration of 17.5 months while offering an ORR of 71% in treating CLL. Both ORRs were the highest ever recorded in clinical trials for either disease.