NVIDIA (NASDAQ:NVDA) stoked high hopes for its Tegra line of mobile processors at the 2011 Consumer Electronics Show, but the reality of its push into mobile computing has been sobering. The company has had a surprising amount of trouble breaking Qualcomm's (NASDAQ:QCOM) grip on the mobile processing market. As a result, Qualcomm's market cap has soared beyond $100 billion, while NVIDIA is still worth less than $10 billion. 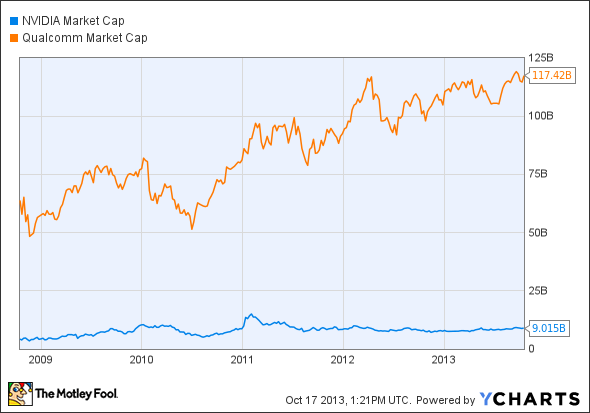 This year's product cycle has been pretty disappointing for NVIDIA. The new Tegra 4 mobile processor was delayed by about one quarter after NVIDIA prioritized research and development for other future products. This probably cost NVIDIA several design wins.

However, NVIDIA may finally have a hit on its hands in the form of the first Tegra 4 smartphone. The Xiaomi Mi3 is a high-end smartphone designed for the Chinese market -- and carries a mid-range price tag. The Mi3 just went on sale this week, but there appears to be tremendous demand for this phone, which is great news for NVIDIA.

String of disappointments
So far, NVIDIA's Tegra business has always seemed out of step with the market. First, after Apple's massive success with the iPad in 2010, NVIDIA had high hopes for the Android tablet market in 2011. NVIDIA won the vast majority of design wins, but the early Android tablets were almost universally poor sellers.

The one Android tablet that became fairly successful that year was Amazon.com's low-cost Kindle Fire. With its $199 price tag, the Kindle Fire redefined the tablet market. However, that design win went to Texas Instruments instead of NVIDIA, probably due to price concerns.

The Kindle Fire has continued to be "the one that got away." Many analysts expected that the second-generation Kindle Fire HD (which was released last fall) would move to Tegra chips, but Amazon stuck with TI. When TI announced that it was dialing back on its mobile processor business late last year, the Kindle Fire processor slot opened up again. Yet NVIDIA missed out a third time, this time to Qualcomm's Snapdragon system-on-a-chip.

NVIDIA did snag two high-profile tablet design wins in 2012: Google's Nexus 7 and Microsoft's Surface RT. However, in a familiar story, the Surface RT was a complete flop, which caused Microsoft to take a $900 million inventory writedown earlier this year. Meanwhile, the Nexus 7 was a hit, but Google decided to switch to Qualcomm processors for the second-generation Nexus 7, reportedly due to their lower power usage.

A much-needed win
By now, you get the picture. There have been lots of design wins and big opportunities for NVIDIA, but at the end of the day, Tegra sales have been lower than expected. In fact, Tegra revenue is expected to be down significantly this year because of the delayed Tegra 4 launch.

However, NVIDIA investors do have some reasons for optimism. NVIDIA's Tegra 4i integrated processor should go into production in early 2014, which will finally give NVIDIA a product that can compete with Qualcomm's integrated solutions in the smartphone market.

Furthermore, NVIDIA did get one major smartphone win with its tablet-oriented Tegra 4 chip: the Xiaomi Mi3. Xiaomi is a fast-rising Chinese brand that is growing rapidly by pricing its phones near breakeven and then earning money by selling services to its customers. (Sound familiar? It's awfully similar to Amazon's model!)

Xiaomi is building two versions of the Mi3: one that's compatible with China Mobile's TD-SCDMA network standard, and a second one for the other Chinese carriers. Tegra 4 will only be found in the former; Qualcomm will supply Snapdragon 800 chips for the latter model. Still, the China Mobile version is the most important one, considering that the carrier has more than 700 million subscribers.

The China Mobile version of the Mi3 went on sale this week, and early demand was very strong. Xiaomi ran through its initial supply of 100,000 Mi3 smartphones in just 86 seconds! Xiaomi expects to sell 20 million smartphones this year (up from an initial projection of 15 million), and, based on the initial demand, it seems like the Tegra-equipped Mi3 could represent a good portion of that total.

Foolish bottom line
NVIDIA still has a lot of work to do to make the Tegra line of mobile processors live up to its potential. Recently, the company's R&D work has been geared toward putting the company in the best possible competitive position for 2014 and beyond. Still, it would be nice to have at least one hit Tegra product in 2013. Based on how fast the first batch sold out this week, the Xiaomi Mi3 could be that hit.